We Used Our Last Jar of Good Aldi Tikka Masala 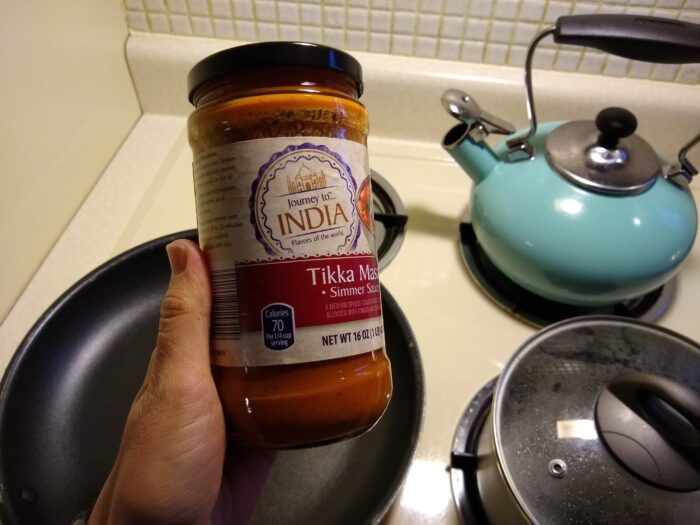 Our last jar. It was fun while it lasted.

Somehow it was appropriate that it fell on Valentine’s Day.

That’s because February 14, 2020, was the night we ate the last jar of the best store-bought tikka we could find.

We’d been putting this off for a while. We knew it was gone from stores, and it looked increasingly unlikely it was coming back. We even settled for a bit of the lesser-quality stuff one night, just to postpone the inevitable. But we knew we couldn’t do that forever. Jars of masala have an expiration date, after all.

So it was that, on a cold Friday night, we poured our lone remaining Journey to India 70-calorie Tikka Masala Simmer Sauce into a skillet, along with some locally sourced pasture-raised chicken we’d purchased from a farmer. It was all together fitting to pair superior tikka with a superior chicken.

We first stumbled on Aldi’s tikka a few years ago. We’d been to a few Indian restaurants over the years, and we’d decided to see what grocers could offer to get close to that level of quality.

Nothing quite did it. We tried a number of brands, from Patak’s to Sharwood’s, along with a couple of other store brands, and just about all of them came up short. The biggest problem was depth of flavor: they were all bland compared to the restaurant stuff. The best we could find was something called Tiger Tiger Tikka Masala, but it was difficult to find and our international grocery store only carried it on occasion.

We tried Aldi’s Journey to India Tikka Masala Sauce on a whim — we’d learned to keep our expectations of grocery tikka low — but it was a revelation. It was on par with the Tiger Tiger sauce, which made it better than anything else we could find in stores by a wide mile. The Journey to India sauce was simply brilliant, with that elusive rich flavor we found in restaurants but couldn’t nail down in a grocer. I don’t think it’s an overstatement to say that it was one of the very best products Aldi sold compared to the competition.

Aldi tweaks its products all the time. Often that tweak is for the better. I think that, for example, Aldi mac and cheese is better now than it was a few years ago. Other products, from limited buy slippers to dishwasher pacs, have seen similar upgrades.

Despite the uniform look that Aldi gives many of its products, the reality is that Aldi sources its products from a range of vendors, and in some cases they may well be rebranding name-brand products. Why and how Aldi tweaks its products is a mystery, closely guarded by the grocer itself. Aldi may be taking in a new formulation from a vendor. Or Aldi may be switching vendors, and for any number of reasons, from financial considerations to quality control.

Regardless of the reason, the fact remains that change and Aldi are synonymous. In 2019, change came to Aldi tikka.

It’s one of the stranger developments I’ve ever seen from Aldi … because the tikka changed a full three times.

The first new tikka appeared sometime around April of 2019. While it was still called Journey to India Tikka Masala, it wasn’t the same thing. It was different. We came to call it the 60-calorie tikka, because that was the easiest way to identify this new tikka, but that wasn’t the only change. Coconut creme and garam masala were gone, and the flavor suffered a little for it. I wouldn’t say it was a full step down, but it definitely suffered for the change.

And then a second tikka appeared, showing up in our stores in June of 2019. This one also was called Journey to India Tikka Masala, but instead of 70 calories or 60 calories, it had 45 calories. Gone now was coconut creme, garam masala, and cayenne pepper, and water was the first ingredient. This time, the taste was a full step down: it was bland, forgettable, mediocre, and all of that.

For whatever reason, Aldi changed things up yet again, this time in the form of an entirely new label: Cook House Tikka Masala Simmer Sauce. Despite the name change, the Cook House tikka tasted pretty much like the 45-calorie Journey to India tikka.

End of the Line

While we always kept hope that Aldi might reverse course and bring back the glory days of the 70-calorie tikka, it became increasingly clear that it wasn’t going to happen, at least not anytime soon. We quickly determined that the best we could hope for was to stockpile what few 70-calorie jars we could find, and possibly a couple of 60-calorie ones, too, which weren’t as good but still were better than the alternative. (We haven’t touched the 45-calorie tikka or the Cook House tikka outside of our initial tests. Once was plenty.)

Time, though, stops for no one, and by early 2020 we were down to a single 70-calorie jar. Without any conscious planning, February 14th ended up being the day we brought the last of our stash up from our storage shelves and into the kitchen. We cooked it up and had it alongside Specially Selected White Basmati Rice, Journey to India Vegetable Samosas, and Specially Selected Naan.

Everything was great. The rice was fluffy, the samosas were delicious, and the naan wrapped up the rice and chicken perfectly. The star of the show, though, was the chicken tikka, which felt as close to being in our local Indian restaurant as we were going to get.

That star has now set. The Aldi sauce that was once a true Valentine is gone … at least for now. Because with Aldi, we never say never.