Tools are a valuable part of any home, but they create a problem. Clutter. The more tools you acquire, the more places you need to put them. So as much as a good home needs things like drills, shovels, screwdrivers, and torque wrenches, it also needs cabinets, bins, and wall hooks. Without them, a garage or workbench can quickly descend into a pile of stuff so hard to sort through that you never know where the things you need are when you need them.

A wall-mounted garage tool holder isn’t always the first thing you think of when you think of tool organization. But it is one of the components of a tidy garage. If you’ve ever kept brooms or other long-handled tools in the garage, you know how annoying they can be to store if you don’t have a good place to put them. Nestling them between a wall and a door frame or tucking them in a far corner are options … at least until some kid walks by and knocks them down (hopefully not into the car).

Aldi has a habit of selling almost anything. So yes, Aldi sells a garage tool holder as part of its WORKZONE product line. 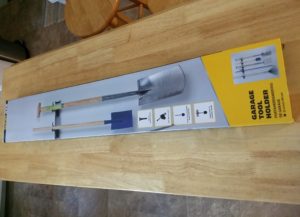 The WORKZONE Garage Tool Holder is an ALDI Find, which means it’s only in stores for a short time. Aldi tends to sell this holder during the summer, although the exact time can vary from year to year, ranging from June to September. This garage tool holder retails for $8.99 at the time of publication, which is as cheap as any we’ve seen inside or outside of the hardware store. It does not come with a warranty.

There is no information on the box as to who made the holder, but Aldi’s support page lists Conmetall Meister, a German-based maker of DIY products, as the maker of the 2018 version. Given that the 2019 version looks identical to the 2018 one, I assume it’s still from the same company.

The box that we got came with the garage tool holder and two small packs containing three screws and three plastic wall anchors each. It only needs three screws and three anchors total, so we wonder if the extra screws and anchors were a packing error, but we can’t be sure because the box didn’t come with a manual or any other instructions. Granted, installing one of these things isn’t too difficult, so I made sure to look at the pictures on the box to make sure I did it right.

The holder is composed of a rail and six hooks. The rail, which measures 35.6 inches long (just under 3 feet) and 2 1/8 inches tall, is aluminum with plastic caps on each end to prevent scratching. The vinyl-coated, galvanized hooks attach to a plastic base that can slide up and down the aluminum rail. Each hook, capable of holding handles between 1/2 inch and 1 1/2 inches, has a small plastic ring that keeps it from opening up too far.

There are three screw holes in the holder. In my garage, the holes were the same width apart as the studs in the wall, so I was able to mount it without anchors. If you don’t have studs or if the location of the studs isn’t workable, you can use the anchors. In either case, you will want to drill pilot holes before installing the anchors and / or the screws. I also made use of a level when I drilled the pilot holes to make sure it was even.

The biggest thing to remember, beyond that, is to make sure you install it where the hooks hang out from the rail, parallel to the ground, when not in use. The rail doesn’t work as designed if it’s upside-down. 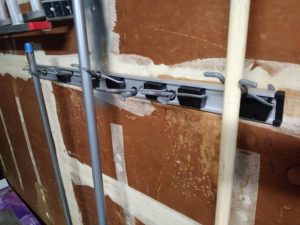 I didn’t have too much trouble installing it on the wall, and the tools I had seemed to fit just fine. I found the holder to be flexible enough to suspend shorter tools in the air while also allowing longer tools to be held in place while resting on the ground. I found I had to play with the hooks a little to slide them across the rail — getting them over the screws also involved pulling them out just a little — but this is also a positive, because once I put them in position they seemed to stay put rather than slide around.

The WORKZONE Garage Tool Holder is an inexpensive, lightweight option for holding handled tools in the garage. It’s easy to install and seems to do the job. Time will tell how it holds up, but in our early testing it appears to do the job.