If you want to incite a debate over dinner (over something other than politics or religion), try to have a civil discussion about what to put on beef. On one end of the spectrum, you have people who think that anything more than salt and pepper (if even that) is a disgrace to God and man. On the other end, you have those who profess undying belief in a secret blend of rubs and spices. Still others swear by a specific brand of BBQ sauce, which is, they emphasize, only to be put on at a very specific point in the grilling process.

And then there is one other group. This group, like someone’s third cousin showing up at a wedding, quietly insists that there is one thing that a steak needs more than anything else, and it’s a simple steak sauce. This sauce, they point out, can invigorate any beef, bringing even poorly cooked morsels back to a state of near-respectability.

This is the story of that steak sauce. Or, at least, the one Aldi makes. 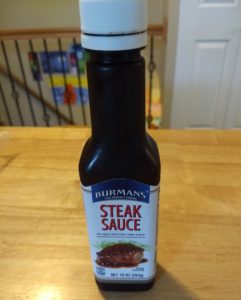 Now, “steak sauce” is a specific classification of sauce that traces its origins to brown sauce found in Europe. In the United States, a range of different sauces fall under this classification, including Heinz 57, Worchestershire sauce, and, most famously, Kraft’s A.1. Anyone who has had these will tell you that they’re all a little different from one another, in the same way that different sodas (or even colas) are all different.

Burman’s Steak Sauce, available in a 10-ounce bottle, is an Aldi Regular Buy, which means it’s available year-round. Like many steak sauces, it comes in an opaque bottle which advises you to shake well before using and to refrigerate after opening. There is also an expiration date printed on the bottle.

You don’t have to look hard to realize that Burman’s is meant to be a take on A.1. Aside from the visual similarities — Aldi doesn’t shy away from shameless packaging imitations — there are several common ingredients between the two, including tomato puree, vinegar, corn syrup, salt, and raisin paste. Burman’s even has almost identical nutrition information: calories (15), carbs (3g), and sugars (2g) are the same while Burman’s sodium is just 10mg higher than A.1. (290mg of sodium per serving to 280mg). This is probably a good time to add that both Burman’s and A.1. contain 13% of your daily allowance of sodium per tablespoon, so be aware if your doctor has you on a low-salt diet. 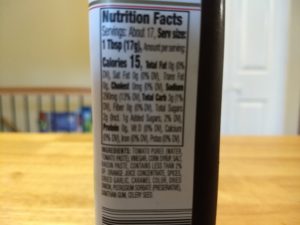 So, does Burman’s taste identical to A.1.? Not precisely, but it’s close enough that, unless you’re a real A.1. purist, you’re probably not going to notice a massive difference. Burman’s is good stuff, and it tastes, in my view, about as good as A.1. does … and for less money.

If you have to have steak sauce, Burman’s Steak Sauce is a worthy imitation of Kraft’s A.1. It tastes very similar, which isn’t a surprise given that it uses most of the same ingredients, and for less money. Like A.1., though, it’s also high in sodium, so, to paraphrase the old A.1. slogan, don’t cover it … discover it.