Aldi keeps a pretty large stock of soups on its shelves, from simple varieties used in cooking to more complex versions meant to be standalone meals. Aldi is known to shamelessly model its packaging after name brands, and this is no more obvious than in the way it mimics popular soup brands in its packaging.

We like to see if the mimicry goes beyond the can. 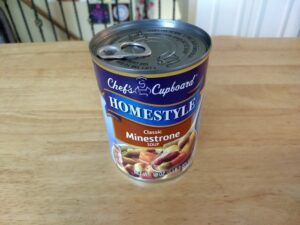 Chef’s Cupboard Homestyle Minestrone Soup is a Regular Buy, meaning it’s available on store shelves all the time. At the time of this post, it runs $1.39 a can, which is pretty cheap for a heat-and-serve soup. It’s pretty obvious that the packaging is an imitation of Progresso soup, so we grabbed a can of the Progresso counterpart to put it to the test. (The Progresso was about a dollar more.)

Heating canned soup is ridiculously easy. You can either 1) pour the soup in a saucepan and cook it until it’s hot or 2) microwave the soup in a microwave-safe dish for 3-4 minutes or until hot. Either way, you don’t need to add water; this soup is designed to be eaten exactly as it is.

We tried the Aldi soup side-by-side with the Progresso and found there was very little, if any, difference between the two. Our four testers thought they basically tasted the same. A couple of testers thought they might give a slight edge to the Progresso’s broth, which might have been a little richer, but beyond that there wasn’t much difference. We should add here that we didn’t think either soup was as good as a true homemade soup, but compared to the brand-name canned soup we thought Aldi held up fine.

Of note, the Progresso soup was also a bit thicker, which we suspect was because it had maltodextrin added, something the Chef’s Cupboard soup did not have. We didn’t necessarily count this as something in the Progresso soup’s favor, as we prefer to have fewer additives in our soup when we can help it.

Beyond that, though, the soups’ nutrition and ingredients are mostly identical. Both have some of the same top ingredients (water, tomato paste, veggies, kidney beans), and nutritionally they’re both about the same. Keep in mind they’re both pretty high in sodium — a typical problem for a canned soup — so this is not something to have all the time, especially if sodium is a concern in your diet. 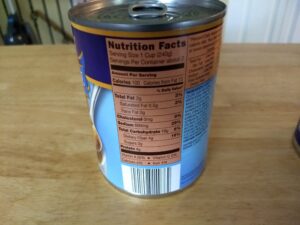 Nutrition information for the Chef’s Cupboard soup. (Click to enlarge.) 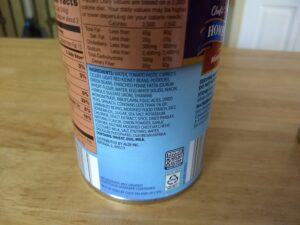 Ingredients for the Chef’s Cupboard soup. (Click to enlarge.)

We generally prefer homemade soups ourselves, but if you’re looking for a canned soup that tastes like a brand name, Chef’s Cupboard Homestyle Minestrone Soup tastes an awful lot like Progresso Minestrone Soup, and for a lot less money. Just be mindful of the sodium.