There are more types of pizza than just thin crust or thick pan pizzas. Often, pizza varies by region. The St. Louis region, for example, is known for its thin-crust pizza with Provel processed cheese. There’s also New York style pizza and Detroit style pizza. But Chicago has perhaps the most famous type of pizza: deep dish.

Deep dish pizza is baked in a special pan with high sides, which leaves plenty of room for chunky tomato sauce and toppings, making it more like a savory single-crust pie than a traditional flatbread-based pizza. Deep dish pizza also is typically made with the ingredients piled on in reverse order, with cheese on the bottom and sauce on the top to prevent the cheese from burning during the longer baking time required for such a thick pizza.

You can find deep dish pizza in restaurants in the Chicago area, but sometimes you can also find them in the freezer section at the grocery store. Sometimes Aldi sells deep dish pizza from a popular Chicago pizza restaurant chain called Gino’s East. The restaurant opened in 1966 and has several locations in the Chicago region as well as in Los Angeles now, but its flagship location is one block from Chicago’s Magnificent Mile. 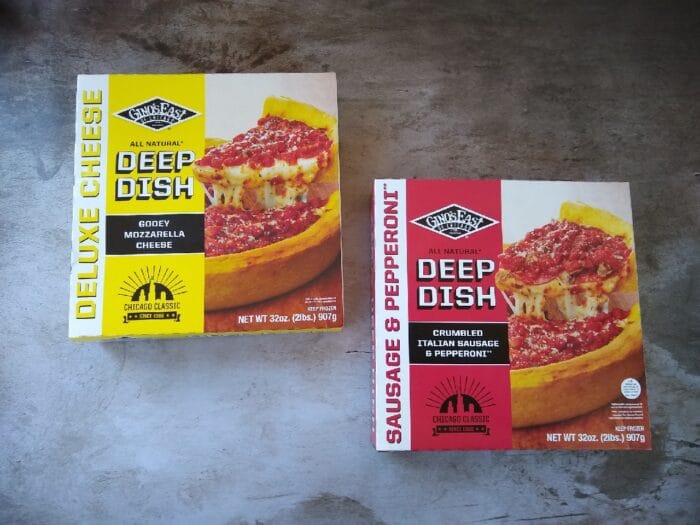 Gino’s East of Chicago Deep Dish Pizza cost $5.85 for a 32-oz. pizza at the time of publication. You may be able to find certain varieties of Gino’s East frozen pizza at other grocery stores. Gino’s website indicates several chain grocers in my area carry their products, but I’m not sure what types of pizza they have or how the prices compare to Aldi.

These pizzas are an Aldi Find (Special Buy), which means they’re only in stores for a short time. Aldi does not offer online ordering for its specials, so once these sell out at your local store, you can’t get them from Aldi anymore. You can order Gino’s pizza from Amazon, but it will cost you a lot.

Each pizza has six 152-gram servings, and with high amounts of saturated fat and sodium, this is a meal you’ll want to enjoy in moderation.

If you’re watching out for allergens, these contain milk, soy, and wheat.

These pizzas can be prepared via a traditional bake or quick bake.

To do a traditional bake, remove the frozen pizza from all packaging (please recycle) and preheat the oven to 375 degrees Fahrenheit. Position the upper baking rack to the center. To avoid spillage, the instructions recommend placing foil on the rack below the pizza. Bake the pizza for 40-45 minutes or until the crust is the level of golden brown that you prefer. Without tipping the pizza, pull it from the oven and let it sit for 5 minutes before cutting with a knife.

To bake from thawed, bake for 25-35 minutes using the traditional baking instructions. Once a pizza is thawed, it should be baked within 48 hours.

To do a quick bake, remove the frozen pizza from all packaging and preheat the oven to 425 degrees Fahrehnheit. Position the upper baking rack to the center. Microwave the pizza on high for 6 minutes, then let it stand for 1 minute. Then bake the pizza for 15-18 minutes or until the crust is golden brown according to your preference. Pull the pizza from the oven carefully and let it sit 5 minutes before cutting with a knife.

I baked our pizzas using the traditional bake method, but instead of putting the pizza directly on the oven rack and risking messy drips in my oven, I put them on a special pizza baking pan with holes in it. It took slightly longer than advertised to get hot in the middle, possibly because I had them on the pizza baking sheet. I left them in the oven for about 50 minutes, and while they were hot all the way through, they probably would have gotten a little hotter if I’d cooked them directly on the rack.

As far as how these taste, my family approved, and even the pickier eater among us ate all of their pizza except for the chewy crust at the end. We felt like the sausage and pepperoni pizza was a little light on the meat, but overall they both were good pizzas. One family member said they still prefer traditional pizza — either thin crust or pan pizza — over deep dish, but this is a fun way to shake up family pizza night on occasion.

Here’s a closer look at each of the pizza varieties: 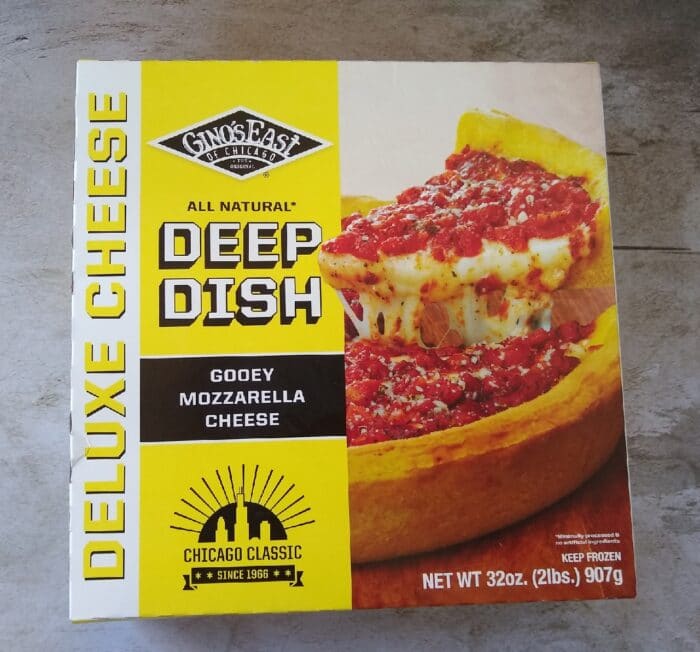 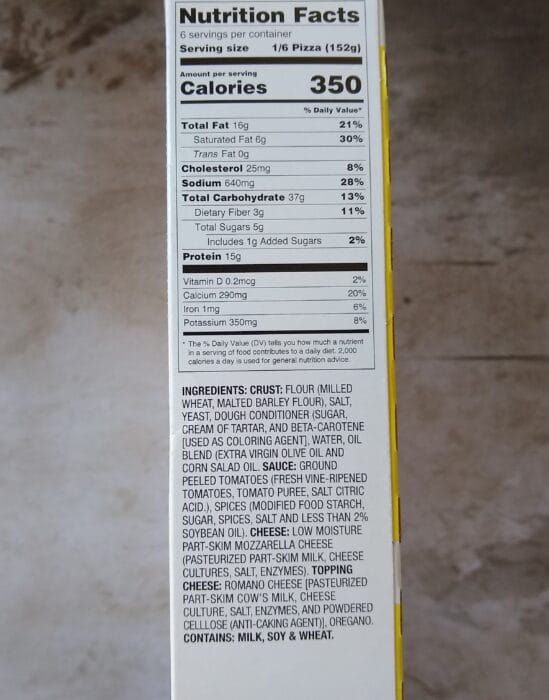 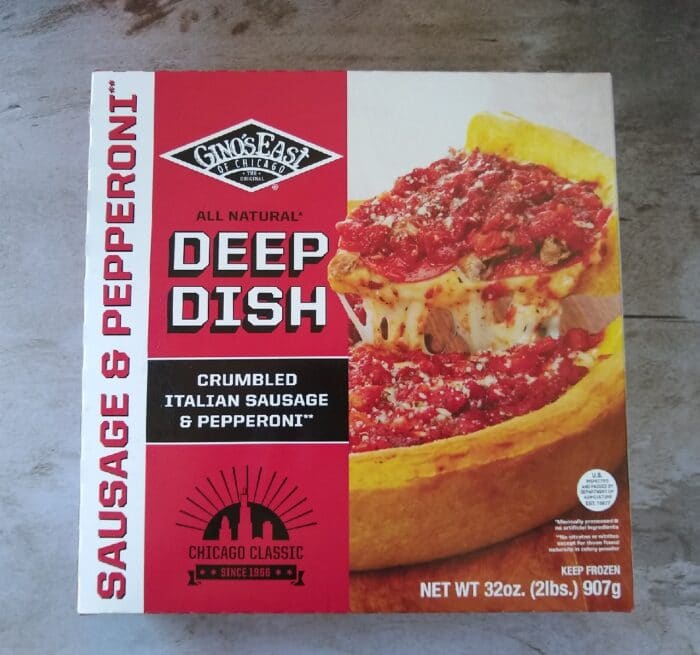 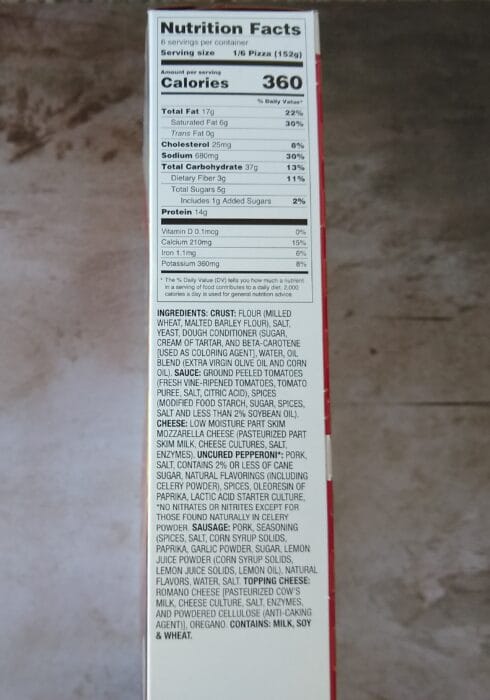 Gino’s East Deep Dish Pizza is produced by a popular Chicago restaurant and may be found in other grocery stores besides Aldi. These pizzas feature a thick, chewy, golden crust filled with rich cheese and a chunky tomato sauce, and they’re worth a try.