Artifacts discovered in a royal Anglo-Saxon tomb located near an Aldi grocery store prior to a road-widening project are going on display at Southend Central Museum in the United Kingdom today.

The area in Prittlewell, Essex, was known to be the site of an Anglo-Saxon cemetery, and the Museum of London Archaeology did an archaeological investigation there in 2003 before the road construction project. The museum’s Anglo-Saxon specialist Sue Hirst told the BBC that “archaeologists had not expected to discover an intact princely burial.” 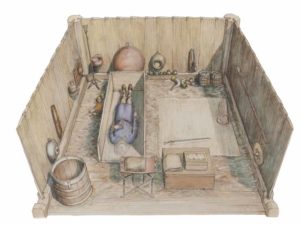 “It was an astonishing sight to look down and see the metal artifacts hanging on the walls,” she said, as reported by CNN, describing it as a “once in a lifetime” opportunity.

Experts think Seaxa, brother of the Christian King Saebert who was king of Essex from AD604 to AD616, may have been buried in the chamber, which dates to the late 6th century. Archaeologists found tooth enamel fragments, although the skeleton and other organic remains had decayed.

Two gold-foil crosses were found in the chamber, and they may have been placed over the eyes of the person buried there. That indicates it may be the earliest dated Christian Anglo-Saxon princely burial in the United Kingdom, although the prince’s burial also incorporated pre-Christian traditions such as a mound, grave goods, and a chamber.

“The position of the gold crosses, gold belt buckle and copper-alloy garter buckles fastened over the instep of the foot within the coffin allows us to infer that he was about 5 feet 8 inches tall,” Hirst told the BBC. 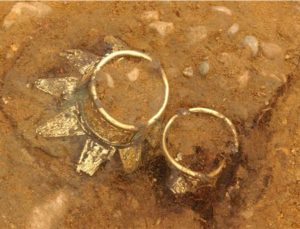 About 40 artifacts were found, including a gold buckle, a drinking horn, colored glass vessels, various weapons, and a lyre. The tomb also contained some items with international connections, including a flagon from the eastern Mediterranean and a Byzantine or Eastern Roman spoon, leading researchers to infer the local Anglo-Saxon culture had an influence on the wider world.

“What this burial tells us is that this someone of a very high status,” Hirst was quoted by CNN. “He’s a big cheese.” She also told the BBC, “The burial implies the presence of such a ruling family in the area with an estate including a great hall where followers and visitors could receive hospitality.”

The chamber was preserved after its roof collapsed, with the space being filled with earth from the burial mound and thus concealed from above. It did not get waterlogged because the soil is sandy and drains relatively well.

“Nothing had disturbed this burial,” Hirst told CNN.