I try to avoid stocking my pantry with excessive amounts of carbohydrate-laden food, so I don’t keep a lot of crackers in the house. While on a recent Aldi shopping trip, though, I decided to take a chance on some Simply Nature Cauliflower Crackers that caught my eye. 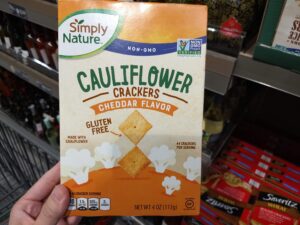 Cauliflower is having a moment right now because of its versatility and its potentially low carb count. We see it used in pizza crust or substituted for white rice, and even served with seasonings and other vegetables for a full meal.

Simply Nature Cauliflower Crackers come in Sea Salt or Cheddar flavors. They were $2.99 for a 4-oz. box at the time of publication. They are ALDI Finds (Special Buys), which means they are only in stores for a short time and then they’re gone. 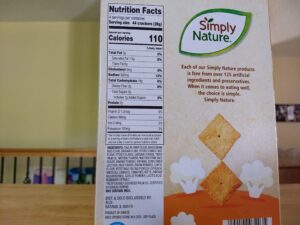 The first ingredient in the cheddar-flavored crackers is cauliflower flour, and the remainder of the ingredients are mostly identifiable items like rice flour, cassava flour, potato starch, responsibly sourced palm oil, paprika, onion powder, lentil flour, a vegetable blend powder (spinach, broccoli carrots, tomatoes, beets, shiitake mushrooms), and a few other ingredients. The natural flavors in the ingredients list may give some shoppers pause, though, as that term is usually a code for chemicals.

The Sea Salt crackers, which I did not try, have 100 calories per 44-cracker serving, 1 gram of saturated fat, 325 mg of sodium, and 2 grams of sugars.

A bit of small print on the front of the box was especially eye catching: 44 crackers per 28-gram serving, and each serving is between 100 and 110 calories That seemed like a lot of crackers, and I wondered if these had the potential to be a low-guilt snack.

I compared the nutrition information and serving sizes with a box of Aldi’s Savoritz Reduced Fat Cheese Crackers (Aldi’s version of Cheez-Its) I already had in my pantry, and there were fewer differences between the Savoritz crackers and the cauliflower crackers than I hoped. One 30-gram serving of Savoritz crackers contained 130 calories and 20 grams of carbs, compared to one 28-gram serving of cauliflower crackers with 110 calories and 18 grams of carbs.

So, the cauliflower crackers are not really a low-carb or lower-calorie cracker. They still may appeal to the gluten-free crowd, though.

I did like the taste and texture of the cheddar cauliflower crackers. They have good cheese flavor, though a bit on the salty side, and a satisfying crunch. They do have a slight cauliflower aftertaste, but it’s not bad. I would consider buying these again. A friend told me she likes to serve these with chili, so I may have to pick up some extra boxes so I have enough for snacking and some for my family’s next chili night.

Aldi’s limited-time gluten-free Simply Nature Cauliflower Crackers come in cheddar or sea salt flavors. I wish they didn’t have natural flavors (chemical flavoring) in the ingredients, and they aren’t as low in carbs compared to traditional crackers as one might hope. They taste good, though, with only a mild cauliflower aftertaste, and they are satisfyingly crunchy.