I have been a paczki fan for years, so this year I was excited to see that my favorite discount grocer, Aldi, is selling these sweet goodies. I grew up in Northwest Indiana, which has a large Polish Catholic population, and this traditional Polish treat that is similar to a jelly- or custard-filled doughnut comes around to local bakeries every year as part of Fat Tuesday celebrations before the Lenten season begins. Whether you are Catholic or not (I am neither Catholic nor Polish), paczki are a nice annual indulgence. 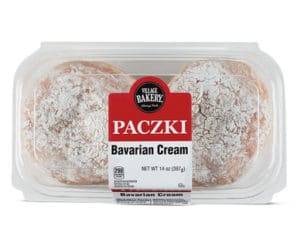 Packzki (I’ve been told the best way to pronounce it is “poonch-key”) were traditionally a way to use up all the fat, lard, eggs, fruit, and sugar in the house before the solemn and reflective season of Lent started, which is a period of about 40 days, depending on your religious tradition, that ends on or a few days before Easter. The day before Lent begins is called Fat Tuesday (or Mardi Gras), and that is on March 5th this year. Lent begins the next day, which this year is on Wednesday, March 6th, a day that is called Ash Wednesday.

Usually I buy paczki from my local regular grocery store, but this year I’ll be trying Aldi’s paczki. The pastry will be in stores starting February 27th, although I’m not sure if they will be available in all Aldi stores or only in areas where paczki are already well known and popular. You’ll want to check your local Aldi ad to be sure. Either way, I don’t expect them to last long on the shelves, and you’ll probably want to buy them before Fat Tuesday. Once they’re gone, they’ll probably not be back until next year.

Village Bakery Paczki from Aldi are $2.89 for a 14-oz. package. The plastic box contains four paczki. One paczki packs a whopping 290 calories, so this is definitely a Fat Tuesday indulgence to partake in before the more lean season of Lent begins. One serving also contains 12 grams of total fat, 4.5 grams of saturated fat, 420 mg of sodium, 42 grams of total carbs, and 16 grams of sugar.

Aldi’s paczki contain wheat, soy, milk, and egg, so those with allergies should be aware.

The Aldi paczki filling is Bavarian Cream. Other traditional flavors, which Aldi is not selling, usually include raspberry, lemon or vanilla or chocolate custard, or prunes (a flavor for real traditionalists).

I usually buy paczki from my local grocery store for $4 for a box of four, or $1 per paczki. Local specialty bakeries in my area sell paczki for a little more than that and perhaps as high as $2 to $3 each. So Aldi’s price is cheaper than any other options in my area, coming in at about 72 cents each.

You can bet that when February 27th rolls around, I’ll be buying some paczki from Aldi, and my family will go about the serious task of taste testing these sweet treats. Perhaps we’ll also pick up some of Aldi’s Polish-inspired pierogi to go with our paczki.