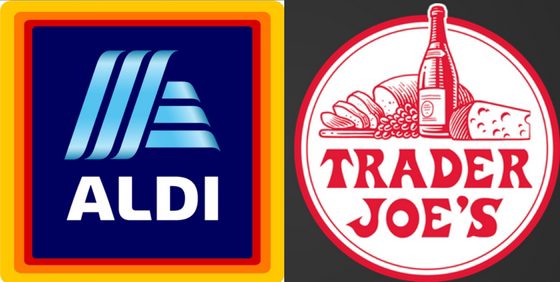 Is that true? Are both companies Aldi? Does Aldi own Trader Joe’s?

The answer is yes and no.

A Brief History of Aldi

The company we know now as “Aldi” was founded in Essen, Germany in the early 1900s by a woman named Anna Albrecht. Anna and her husband, Karl Sr., had two sons, Karl Albrecht and Theo Albrecht. After World War II, the two sons took over their mother’s grocery company, and by the 1950s they had expanded it into a chain of a dozen supermarkets under the name Albrecht KG.

The problem was that Karl and Theo had a disagreement. Theo wanted to sell tobacco products, like cigarettes, while Karl believed selling them would attract shoplifters. This proved too big of a sticking point for the two, so in the early 1960s they decided to split up the company over that disagreement.

By then, they had also decided to rename their grocery chain, calling it Aldi. Aldi was short for Albrecht Diskont, or, in a more English-speaking way, Albrecht Discount. (That’s why Aldi is not called Aldi’s.) When they split, both brothers kept the name. Theo’s company became Aldi Nord; Karl’s became Aldi Süd.

Even as separate companies, though, Theo and Karl continued to work together in complex ways, much of it out of the public eye. They stocked the same products, for example. They organized their stores the same way. They worked together on common contracts with suppliers. When the Internet era hit, they joined together to create a common international website.

They even worked together to divide up what countries they expanded into, so they wouldn’t compete with one another. Aldi Nord, which initially operated in northern Germany, now expanded into places like France, Poland, and Spain. Aldi Süd, which initially operated in Southern Germany, opened up stores in many English-speaking countries, including Ireland, the United Kingdom, and Australia.

In 1976, Aldi Süd established the first Aldi stores in the United States and grew rapidly across the country. But America was the largest country Aldi had ever expanded into, and it was clear there was room for both Aldi Süd and Aldi Nord to operate. Aldi Nord owner Theo Albrecht, however, did not appear interested in opening Aldi Nord stores here.

Instead, he found another opportunity. In the late 1970s, Theo took notice of a small but growing chain of stores in California founded by a man named Joe Coulombe. Coulombe had started a chain of convenience stores called Pronto Market, which were (and are) much like 7-Eleven. Coulombe concluded, though, that his stores were too much like 7-Eleven, so he moved into the grocery business. Inspired by a vacation in the Caribbean, where he saw American travelers dressed up in the Tiki fad of the time, he decided to create a grocery store with a relaxed South Pacific vibe. Trader Joe’s was born.

Theo Albrecht, owner of Aldi Nord, decided that Trader Joe’s was his foothold into the United States. He offered to buy Trader Joe’s from Coulombe. Coulombe agreed, selling the company in 1979, although he stayed on as the chief executive of Trader Joe’s until 1988.

That means Aldi does own Trader Joe’s … but not the Aldi that Americans are familiar with. Aldi Nord owns Trader Joe’s and Aldi Süd owns Aldi US.

How Aldi and Trader Joe’s Are Related

Keep in mind that Nord and Süd are separate companies that often work together. Does that make Aldi US and Trader Joe’s brothers? The answer is no.

Aldi is all about speed and efficiency. At Aldi, customers use a quarter to unlock a cart, bag their own groceries, and return their cart to the cart rack when they’re done. The inside of Aldi has stacks of items in disposable carboard packages to minimize how long it takes to get things out in the stores. The employees are polite but all about speed.

Trader Joe’s is very different. There are no quarters, and Trader Joe’s will happily bag your groceries in those distinctive TJ’s paper bags. You won’t find any cardboard packaging at Trader Joe’s; items are neatly stacked on the shelves. TJ’s workers — which the grocer calls crew members — are reasonably fast, but they’re also about the nicest and friendliest checkout workers you’ll ever meet.

They advertise and market differently, too. Trader Joe’s uses a Fearless Flyer that is much different than the Aldi Weekly Ad, and Trader Joe’s has a smaller social media presence than Aldi US. Also telling: Trader Joe’s is not listed as part of the Aldi family on the Aldi international website. Neither Aldi Nord nor Aldi Süd consider Trader Joe’s part of Aldi’s grocery chain.

What about the claim that Aldi and Trader Joe’s sell the same products? A careful look at the two stores will tell you that many of their products are quite different from one another. We’ve seen this repeatedly ourselves. If there are any similar products, those may be just about suppliers who stock private labels to multiple companies rather than an agreement between Aldi and Trader Joe’s. There is no evidence that we can see that Aldi US and Trader Joe’s cooperate or work together in any way.

How Trader Joe’s Fits Into Aldi

Because Aldi is a private company, outsiders have no way of knowing how much money the company makes, or how that money is made, unless the company reveals it. Aldi is pretty secretive about those things. So we don’t know how the profits, for example, from Trader Joe’s flow up to Aldi Nord, although we assume that at least some of the money made at Trader Joe’s cash registers makes it way back to Germany.

Trader Joe’s has taken a different path to profits compared to Aldi. Aldi has expanded rapidly in recent years, both into new countries and into new areas in existing countries. In America, Aldi is in the midst of an ambitious growth plan and is poised to become the third-largest grocer in the United States behind Walmart and Kroger. As of now, Aldi operates over 2,000 stores in 36 states.

Trader Joe’s meanwhile, operates only about 530 stores. It does add new stores, but only a handful a year rather than the hundreds Aldi adds. Make no mistake about it, though: TJ’s is a high-performing business, making more money per square foot than any other grocer. Analysts estimate Trader Joe’s brings in around $13.7 billion per year in revenue. Compare that to Aldi US, which takes in an estimated $18.44 billion per year … with about 4 times as many stores. This is no insult to Aldi US, which is doing terrific business, but it does speak to just how uniquely impressive the Trader Joe’s business model is.

For all of those reasons, we’ve taken to calling Trader Joe’s a distant cousin to Aldi. It’s part of the Aldi ownership line, to be sure. But it also operates in its own separate world, with a flavor all of its own.