On paper, the more recent versions would seem to be a slight upgrade over the 2017 version. It can be affixed to the windshield with a suction cup, or attached to an included plate that can be put on a surface with 3M adhesive. In practice, though, we found the 2018 model didn’t stay in place as well as the 2017 version: our 2018 holder tends to fall off our windshield often, while the 2017 rarely does. We think part of the reason is that the 2017 model had a bit of sticky adhesive on the suction cup, while the 2018 did not. 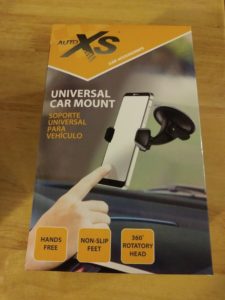 Of note: in 2018 Aldi also sold a magnetic car mount, which uses a magnet that attaches to a plate that goes on your phone or case or between your phone and case. We opted not to test this one; if you have, feel free to let us know in the comments.

Aldi sells a variety of Special Buy (ALDI Find) car accessories under the Auto XS line. They can appear at any time of the year, although we see a lot of them in the spring and summer, and include everything from trunk organizers and car covers to USB adapters and car cleaning supplies.

On the smaller end of the spectrum is this. 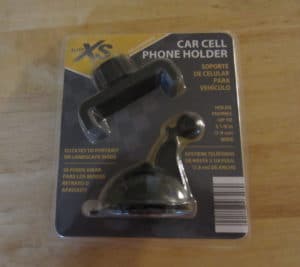 The Auto XS Car Cell Phone Holder, which retailed for $4.99 when we bought it, comes in a clamshell packaging. There are two pieces to it: a base that includes a suction cup on the bottom, and a spring-loaded clip that connects to the ball joint at the end of the base. There is no warranty, which is typical for the smaller Auto XS products, and there is no indication on the packaging who the manufacturer is.

The clip holds phones up to 3 1/8 inches (7.9 cm) wide and can be used in both a portrait or landscape position. I recommend you take measurements with your phone in the case before buying this; while it fit all of our phones without trouble, they all have screens of about 4.5″, so if you’ve got anything larger, you want to be sure it will fit.

Assembly is pretty simple. You unscrew the nut on the clip, then push the ball joint in until it clicks. Then you tighten the nut. Just like that, you have a cell phone holder.

Attaching it to the car is likewise simple. First, clean the surface — either the windshield or dashboard — that you intend to attach the clip to. Second, you pull the plastic wrap off the suction cup; when you do you’ll find there is a sticky residue on the bottom of the suction cup. Third, you lift a lever behind the suction cup, push it against the car surface, and then push the level back down.

All you need to do now is affix your phone, and you’ve got a car holder. 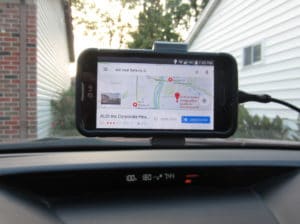 Nothing really fancy, but it seems to do the job.

It’s not particularly sophisticated and we’re not sure about its longevity, but for $4.99 it’s less than most car cell phone holders we’ve seen. Just make sure you take measurements, as it isn’t designed to hold phones larger than 3 1/8 inches wide.