This is a cucumber. 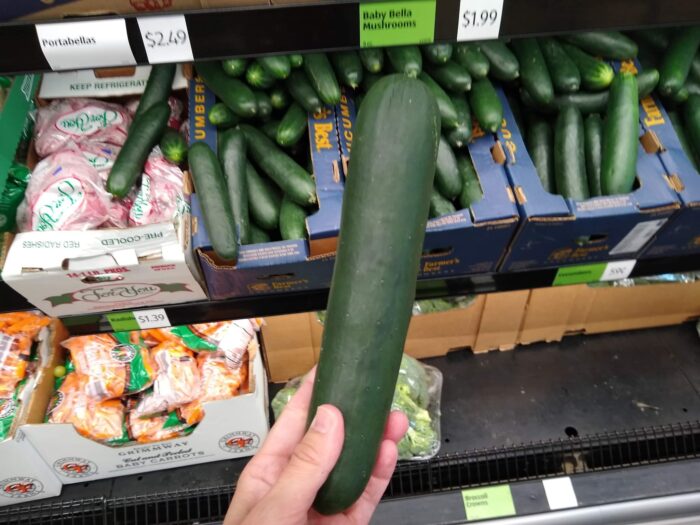 That, in and of itself, is not especially significant. I mean, cucumbers are just a vegetable, and not a particularly special or even popular one, at that. No one breaks down the grocery store doors to get a cucumber.

This is a cucumber at Aldi.

This is also not particularly significant. However, we noticed recently that Aldi cucumbers have apparently become … well, a thing.

As in, random people posting random pictures of cucumbers online.

Now, most of the cucumber pictures we’ve seen aren’t in the store: they’re outside. Cucumbers on empty carts are apparently popular. So are cucumbers on sidewalks, or on street corners, or in the bagging area.

Where Did This Come From?

While I’m sure there’s probably some example of ancient people carving random vegetables into stone — to say nothing of more recent still life paintings — I can’t pin down any particular event that launched the random lonely cucumber phenomenon.

The earliest reference I could find of a random cucumber was this — well, random — blog post in 2006:

I also found this short-lived and now-dormant Twitter handle from 2014:

People, it seems, find the idea of a random cucumber funny. Maybe it’s because cucumbers are such an ordinary vegetable and there is this unexpected humor in finding an ordinary vegetable just sitting there. Maybe there’s a little bit of VeggieTales influence on the idea that the cucumber is more than just a vegetable. Either way, at some point the notion of a cucumber as a prop became a thing.

Here’s another one from a different Facebook group, later on that year:

When I did a search on Facebook for photos before 2021, I came up empty. If this was a thing with Aldi fans before then, I can’t find it.

What’s more, when I scoured the comments of various cucumber photos from 2021 looking for someone to explain where this all came from, I also came up empty. There were certainly others asking the same question, but no one had any answers.

Also of note: the trend seems to have gained new life in mid-2022, spurred on by a handful of viral Facebook posts, including this one, which was subsequently copied into one of the larger Aldi Facebook groups. For that reason, there seems to be an uptick in the number of photos on Facebook in 2022, especially the summer of 2022, compared to 2021.

If it’s like most trends, I would assume it will probably fizzle out with time. But for now, it appears that rogue cucumbers will be popping up on social media for the near future.