In the part of the Midwest where I live, winter sneaks up on us. One day, it seems, it’s 70 degrees and sunny, and then suddenly it’s 10 degrees and frigid. A sure sign that visibility is going south is looking out the window on a cold morning and seeing a layer of frost on the windshield.

An ice scraper is an indispensable tool on those kinds of mornings. Depending on where you live, a snow brush can be important, too, especially if you’re clearing overnight snow off your car in the morning or brushing off a wave of the stuff as you get ready to head home from work.

During the winter months, Aldi sells a snow brush and ice scraper.

The Auto XS Snowbrush with Ice Scraper is an ALDI Find, meaning it’s only in stores for a little while. It runs $3.99, which I think is pretty cheap given what this one can do. It’s made by Walser Asia Pacific, a Hong Kong-based subsidiary of Walser, a German company that specializes in automotive accessories. 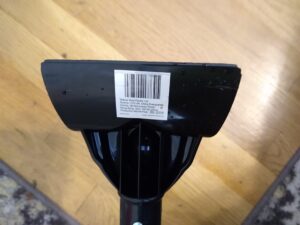 A tool like this is pretty simple, but there are several little details that I noticed.

One, the ice scraper appears to be molded in a reinforced fashion. It’s not just a simple blade, but rather a contoured blade molded into a larger piece that is grooved to push snow and ice out of the way.

Two, there is a foam grip next to the ice scraper. It’s soft and looks like an ideal handhold for both the scraper and brush.

Three, in the middle of the scraper is a release button that, when pressed, allows the aluminum handle to telescope out to a greater length. There are three length positions, and all of them lock in place, so you don’t have to worry about it shrinking on you.

Four, the brush has a loop on it that lets you get a handhold on that side. As with the foam grip, it gives you one more place to grab as you do the work.

I put the scraper to some use scraping ice and I found it was well designed ergonomically. It has several places you can grab it to get the job done, and I appreciate that versatility. I also like the length of the telescoping brush: while it has its limits, it does make it easier to get to snow atop my small SUV.

Aldi isn’t a hardware store, but this Auto XS scraper and snow brush is a surprisingly versatile tool. With a reinforced scraper, foam grip, telescoping shaft, and a number of handholds, it’s a nice addition to any car that needs to deal with subfreezing temperatures. And the $3.99 price tag is about as low as it gets.