For many people, late spring means it’s time to bring the grill back out of hibernation. (My grill never really goes into hibernation, but that’s another story.) As Memorial Day approaches to herald the unofficial start to summer, it’s natural for people to start thinking pork chops, chicken wings, hot dogs, and perhaps some vegetable kabobs, too.

But, sometimes, Aldi also sells a few limited-run burgers that are a variation on the traditional burger formula, most of them under the Cattlemen’s Ranch brand (which is also the label for some of Aldi’s Regular Buy burgers, too). Some of them are Seasonal Favorites, while others are ALDI Finds. 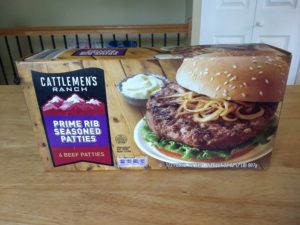 Cattlemen’s Ranch Prime Rib Seasoned Patties are an ALDI Find (Special Buy), which means they’re only in stores for a limited time. (It was sold alongside a “pub style” version, which we did not review here.) They come in a box in the ALDI Find frozen section, running $5.49 for the box at the time of this post. Each box comes with 6 large 1/3-pound patties, which comes out to about 91 cents a patty. As the package suggests, this is a standard burger that has a “prime rib” seasoning: you can find the specific ingredients for that in the image below.

Preparing these burgers is pretty much like preparing any other burger, although the box does helpfully provide cooking instructions for grill, skillet, and broiler, should you need them. With the grill and skillet instructions, the key is to cook the burger over high heat until the juices begin to come through the top, then flip the patties until the internal temperature is 165 degrees. Broiling, meanwhile, requires cooking them until brown on one side, then flipping and cooking to 165 degrees.

I opted to grill them, which took about 12 minutes.

Overall, we liked the burgers. They cooked easily and had a mostly good texture. (One of our burgers had a little gristle, but it wasn’t a major problem.) The “prime rib” seasoning that is supposed to give them a sort of “prime rib” flavor is a fairly subtle flavor — while I could taste a little bit of difference from a standard burger, it wasn’t overpowering. I’m not sure it’s worth the extra cost over a Beef Burger, but they tasted fine enough.

Nowhere on the box does it indicate how lean these patties are. However, each 1/3 pound patty contains 42 grams of fat, which leads us to think that these burgers are between 70-75% beef … and 25-30% fat. What you think of this may depend on your tastes: leaner 85% burgers are lower in fat but can dry out faster, while 70-75% burgers are typically juicier but also less healthy. 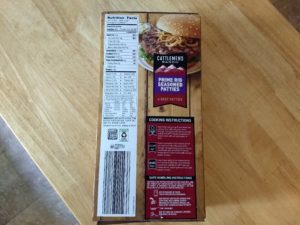 Among the many varieties of burgers Aldi sells, this version is a decent one, with a hint of prime rib flavoring. I’m not sure it stands out all that much over Aldi’s other burger offerings — and it’s a fattier burger — but if you’re a burger fan looking to experiment, this isn’t a bad option.