Every summer, Aldi sells these delicious little frozen, chocolate-covered bananas among the store’s Special Buys. I’m a total sucker for them. I pick up several boxes when I see them in the store, and as long as Aldi has not run out, I keep buying boxes on subsequent weekly shopping trips until they are gone. I love them. My husband loves them. My kids love them … but they prefer the milk chocolate variety over the dark chocolate. 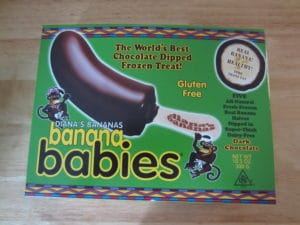 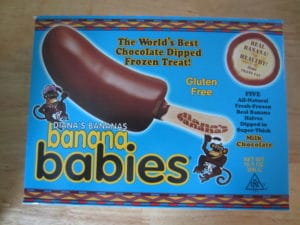 Diana’s Bananas Banana Babies are not an Aldi product line. The Diana’s Bananas website features a store locator that indicates several major grocers in my area, as well as Target, sell the products. Aldi usually carries the bananas for a limited time every summer.

Banana Babies are all-natural fresh-frozen real banana halves dipped in super-thick chocolate. They come 5 to a box and are dipped in either milk chocolate or dark chocolate, and they’re both good. I’m not the biggest fan of dark chocolate, but this stuff is yummy.

The only downside is that they are a bit expensive. At the time of publication, my local Aldi sells them for $3.89 for a box of five, but they’re so good — and almost guilt-free for the diet-conscious — that I always buy them when Aldi carries them.

Product boxes state that the frozen banana business grew from a family confection store that opened nearly 50 years ago in Chicago. They had a booth at the first Taste of Chicago — the city’s annual open-air food fest — where they introduced their hand-dipped frozen bananas. The bananas were such a hit that Diana’s Bananas, Inc., was created so people everywhere could enjoy the treats year-round.

The bananas are grown in Ecuador, and within minutes of being picked, they are peeled and quick-frozen to preserve quality. Diana’s Bananas website states that banana peels are recycled on site so that “rather than producing waste, we are producing a sustainable product that gives back what it takes.” I’m assuming the peels are composted, but they don’t actually say so.

Diana’s Bananas also states their product uses real bar chocolate that is higher in quality than “standard ice cream bar chocolate” and is good at “resisting the kind of cracking that you get when you bite into other chocolate coatings.” The website also says the chocolate “comes from a family owned company that has long been a pioneer in advancing sustainable cocoa farming. They focus on improving farmer livelihood with tools and training; practice responsible, sound environmental stewardship in cocoa-farming communities; and improve economic returns for cocoa farmers while strengthening the farmer associations.”

Diana’s Bananas Banana Babies contain no artificial flavors, preservatives, colors, or trans fats. Both the dark chocolate and milk chocolate varieties will net you 130 calories and 14 grams of sugar for one serving. The dark chocolate version also notes it is dairy-free but may contain incidental milk products.

Every summer when Aldi sells Diana’s Bananas Banana Babies as a Special Buy, I pick up several boxes. These frozen banana halves dipped in milk chocolate or dark chocolate are a delicious treat, and because they’re made with bananas, they’re healthier than your average frozen confection. They are more expensive than traditional Popsicles but totally worth it. Highly recommended.