When we set up the SOHL Furniture Writing Desk and the SOHL Furniture Mesh Office Chair, we quickly realized that our location had a couple of problems, electrically speaking. One, we had a single 2-plug, 3-prong socket nearby, which wasn’t enough for the multiple things we needed to plug in over there, including a printer, laptop, lamp, and, potentially, phone charger. Two, we didn’t have a surge protector — meant to keep electrical surges from damaging or destroying our technology — available to place in that corner. 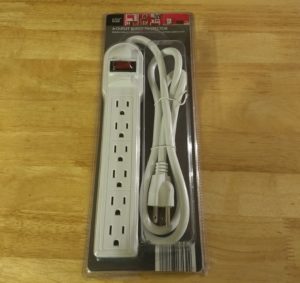 The Easy Home 6-Outlet Surge Protector retailed for $4.99. We’ve purchased a variety of surge protectors over the years, but none this inexpensive. That means if you’re looking for something comparable to the garden variety surge protector you can get from the hardware or big box store, this will do the same job for a few dollars less. Setup is about as simple as it gets: plug the thing in, make sure the light is on, and you’re good to go. We had, as you expect, zero problems setting up the strip.

But … it’s also important to know that not all surge protectors are created equal. To explain, let’s talk briefly about the specs on the Easy Home Surge Protector:

So what constitutes a “good” rating? Well, we have a $20-30 Belkin 12-plug model that we use to protect our entertainment center — television, Blu-ray player, video game systems, stereo, and the like — and it has a clamping voltage of 500V and is rated for just shy of 4,000 joules. In other words, it’s a far superior layer of protection compared to the Easy Home, although it’s also more expensive. (Our Belkin also comes with a warranty of up to several hundred thousand dollars to replace devices plugged into it that are damaged, although many people question how easy it is to get companies to pay up on those warranties.)

That means that the Easy Home, while generally fine for small things, is probably not the surge protector you want to entrust thousands of dollars worth of electronics equipment to. How it will survive, say, a major lightning strike is debatable.

If you’re looking to add some plugs to a wall socket, this is a pretty good way to go. It’s very inexpensive and does the job. On the other hand, if you’re looking for protection against surges, you’re probably wise to spend more and get a surge protector with better specs, since the ones on this strip are pretty basic.