Any kid who has been to a Chuck E. Cheese or similar family gaming establishment has probably seen the hoops setup. You might know it: it’s a large basketball setup where you toss balls in the hoops for, more often than not, tickets. It’s not as iconic of an attraction as, say, Skee-Ball or the big ride-on racing arcade games, but if you’ve been in a large arcade, you’ve probably seen one.

Basketball in general is a popular American sport, in part because it doesn’t require a lot of equipment to play other than a ball and a basketball court, both of which are cheap and easy to find. Kids who play basketball can often be seen playing it on and off the court itself — just ask any school teacher how often their kids try to sink a shot in a trash can with a crumpled wad of paper.

A kid who loves basketball will want basketball everywhere. So why not put a net on the back of a bedroom or basement door? Just in time for the holidays, Aldi is selling such a contraption. 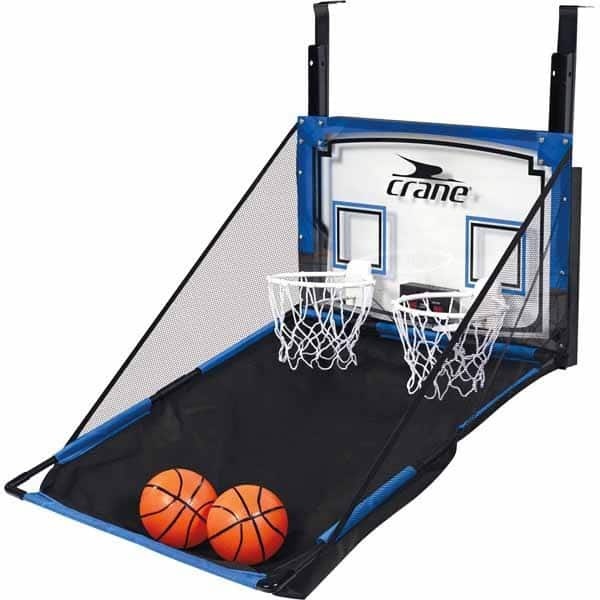 The Crane 2-Player Over-the-Door Basketball Set (Product Code: 703098) is an Aldi Find. That means it’s only in stores for a short time. Once it’s sold out, you won’t be able to find it until it comes back. This looks like a winter holiday product, so we wouldn’t expect to see it again until the next winter, if ever. Aldi doesn’t have online ordering for products that aren’t in stock at your local store.

At the time of this post, the set costs $29.99. That’s cheaper than most other indoor basketball sets I can find, and many of the ones online don’t have the returner slide that this one does.

This is sold under the Aldi Crane brand, which is not its own company. Rather, Crane is the private label Aldi uses for athletic, outdoor, or fitness products. Other recent Crane products at Aldi include an 8-in-1 gaming center, an instant canopy, and a portable table.

We haven’t tried out this basketball set, so we don’t know how easy it is to put up, how well it plays, or how durable it is. We’ve created this open thread for users to share their experiences.

Do you have experience with this set? Let us know about it in the comments.