Aldi sells technology under a few different brands, including Bauhn and Medion. Aldi also occasionally sells technology from third parties. iHome is not an Aldi house brand — it is a brand for SDI Technologies, a New Jersey-based company that also sells products under the likes of Timex and Sylvania. This is the second iHome product we’ve spotted at Aldi, the other being a similarly designed waterproof rechargeable speaker. 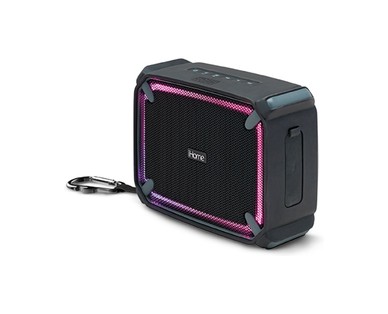 The iHome Weather-Tough Speaker with Carabiner (product code 58938, model number iBT520CCBAF) is an ALDI Find, available only for a limited time. It retails for $49.99. Aldi claims that it is an Aldi exclusive, although iHome sells similar models on its website and through other vendors. According to Aldi, the speaker is both waterproof and floatable, so you can play music literally on the surface of your pool. It has a battery life of up to 19 hours, which powers both the sound that comes from the box (including a passive subwoofer) and the adjustable accent lighting.

The device also can operate as a speakerphone and respond to voice commands when paired with a phone via Bluetooth. While most of its features probably work with just a simple pairing, iHome’s website also touts that similar speakers work best with the Melody app. The Melody app site has links to both iTunes and Google Play versions of the app, although right now both apps show as unavailable in their respective stores.

Oh, and the speaker includes a carabiner bottle opener. A bit random, but hey, it’s part of the packaging.

We’re not sure how much the absence of the app impacts what the speaker can do. As we said before, the Melody app is not currently available, and it’s not clear if 1) there is another app that does anything and 2) what that app is. It’s possible the speaker has built-in voice commands through the speaker itself.

We also haven’t spotted any support pages on iHome’s website for this particular model. Right now, neither Aldi nor iHome have, for example, any manuals for this speaker posted on their websites.

Do you have any experience with this speaker? Feel free to let us know in the comments.