In the early summer months Aldi rolls out a few Special Buy products designed for life in the water, including goggles and water toys. When it comes to safety, meanwhile, Aldi offers a couple of options, including these life vests: 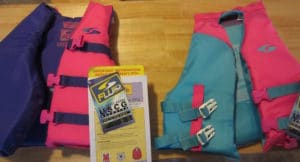 The Fluid Aquatics U.S. Coast Guard Approved Life Vest retails for $8.99, which is the cheapest price for life vests that we’ve ever seen. It comes in three sizes: child, youth, and adult. The child size is designed for kids 30-50 pounds, the youth for children 50-90 pounds, and the adult for anyone more than 90 pounds. The brand, Fluid Aquatics, appears to be a trademark of Stallion Sport Ltd., a Hong Kong-based manufacturer. Their site suggests that they manufacture for several well-known brands, including Sea-Doo, Speedo, and Body Glove, so if that’s true, these may be rebranded versions of products that also are sold under those brands. (They also manufacture Aldi’s take on a puddle jumper.) 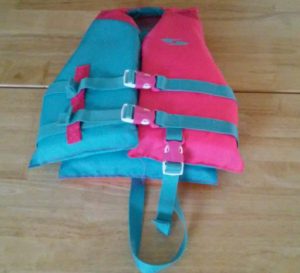 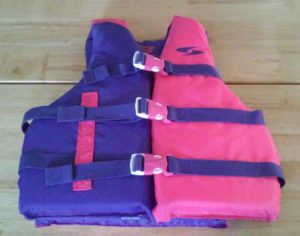 In life preservers there are various types, from Type I to Type V. Type I is the safest because they are better at keeping unconscious people’s faces above water, but they are also more bulky. The Coast Guard argues the Type I devices are only slightly safer statistically, so the important thing is to wear a Coast Guard-approved device.

These are “Type III” devices, which means that while they are the least bulky among Coast Guard approved life preservers, they are not designed to keep an unconscious person’s head above water the way Type I devices, and to a certain extent Type II devices, are. On the other hand, Type III devices are the most comfortable, and statistically very safe. In a nutshell: this vest is safe without being bulky.

So, does the life vest do the job? We tested the child (30-50 pound) vest with a 40-pound child and the vest did a good job of keeping the child afloat. The two chest straps and the “leg strap” that hooked between the child’s legs appeared to keep the child secure in the water. One problem with the child’s vest, though, was that the right side tended to ride up a little compared to the left, which seems to be due, as best as we can tell, to the way the vest is designed. 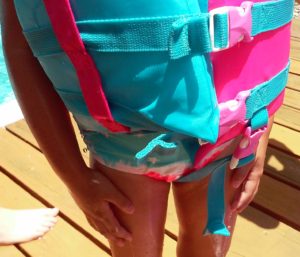 The child vest in the wild. Notice the bottom of the left side has slipped up a little.

The right side (or left in the image above) uses straps that are threaded through those pink guide loops, and the vest tends to slide up where the tip of the turquoise side is higher than that of the pink. As far as we can tell, it didn’t affect the functionality or safety of the unit — our test subject stayed afloat and was perfectly mobile — but she did look a bit ridiculous coming out of the water, which may make a child self-conscious. (Our tester did not like the look.) We tried several different approaches to fix the problem but could not.

When we tried out the youth version, it not only kept our test subject afloat, but it stayed exactly where it was supposed to be. It worked exactly as described. 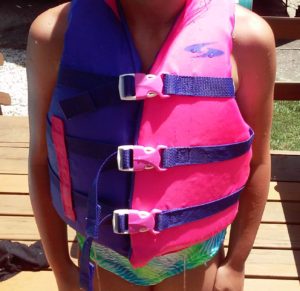 The youth vest in the wild. It stayed fit well.

If you’re looking for a Coast Guard Approved Life Vest, you probably won’t find a cheaper one anywhere else. We had a little trouble with one side of the child version riding up a bit compared with the other, although we didn’t see any change in functionality as a result. The youth version worked excellently, and because it is similar to the adult version, we assume the adult probably also works well.