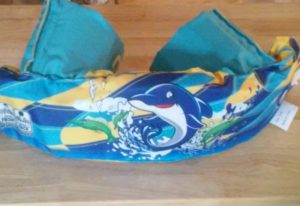 Fluid Aquatics U.S. Coast Guard Approved Paddle Pals retail for $12.99 and usually appear during the summer. They are distributed in America by Sport Dimension, a California-based company, but Fluid Aquatics is a trademark of Stallion Sport Ltd., a Hong Kong-based manufacturer. According to Stallion Sport’s website, the company apparently manufactures for several well-known brands, including Sea-Doo, Speedo, and Body Glove.

That means the Fluid Aquatics Paddle Pal is basically a rebranded Body Glove Paddle Pal. Body Glove Paddle Pals are similar, but not identical, to Stearns Puddle Jumpers; a Paddle Pal has an extra vest element across the chest and shoulders that helps to better secure the device, especially on a kid who might be on the slim side. 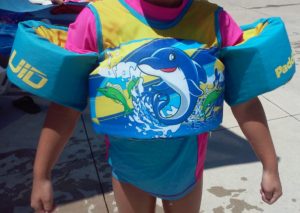 Our test subject. It was a smooth, snug fit with or without a swim shirt.

Both Puddle Jumpers and Paddle Pals have outstanding reviews online. The Paddle Pal gives you more, but you also pay more … except for the Aldi Fluid Aquatics version, which is half the cost of a Body Glove Paddle Pal and is a little less than a Puddle Jumper. That makes the Aldi version an especially good deal.

In life preservers there are various types, from Type I to Type V. Type I is the safest because they are better at keeping unconscious people’s faces above water, but they are also more bulky. The Coast Guard argues the Type I devices are only slightly safer statistically, so the important thing is to wear a Coast Guard-approved device,

The Paddle Pal is listed as a “Type V” flotation device, designed for children 30-50 pounds. A Type V device is considered to be equal in safety to a standard Type III life vest when worn; that means that while a Type III could be used as a flotation device even if you weren’t strapped to it, this device isn’t meant to be used that way.

In other words, as long as your kid is wearing the Paddle Pal, he or she will be as safe as they would be wearing a life vest.

So what does a kid think? We tested it on the same 5-year-old who tested the Fluid Aquatics Life Vest … and she absolutely loved it. It fit well, kept her head nicely above water (even when she jumped off the side of the pool), and gave her good freedom of motion. She repeatedly expressed that she liked it better than the vest.

It’s hard not to like what Aldi has in the Paddle Pal. It’s a Coast Guard-approved flotation device that does everything a Searns Puddle Jumper or Body Glove Paddle Pal does, but for less than both. In fact, this is basically a rebranded Body Glove, which has outstanding reviews outline, and it secures to a child a little better than a Puddle Jumper. If you’re in the market for this style of flotation device, you aren’t likely to do better. Definitely recommended.