Coleslaw is one of my favored restaurant sides, but I’m also a bit picky. Some restaurant coleslaw is really good, while other versions are downright awful; more than once I’ve been burned by an otherwise-good restaurant that decided it didn’t need to pay the same attention to its side items that it did to its main dishes.

Aldi recently stepped up to the plate with its own version. 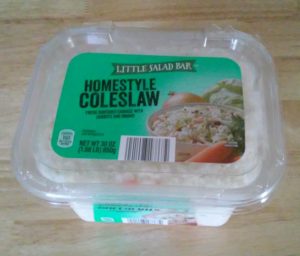 Generally speaking, there are two kinds of coleslaw: mayonnaise-based and vinegar-based. Both have their virtues. I tend to prefer the mayo-based version myself, but there are some meals that go well with a vinegar-based slaw.

Little Salad Bar Homestyle Coleslaw is a mayo-based coleslaw. The version I bought came in a large 30-ounce (1.88 lb) plastic tub. With 11 half-cup servings, this is enough to feed a family and then some, and the tub is recyclable when you’re done. The primary ingredients include cabbage, sugar, mayonaise, carrot, onion salt, and, yes, some vinegar.

This being coleslaw — with mayo — nutrition is not this product’s strong suit. A single 1/2 cup serving contains 9 grams of fat, 240 mg of sodium, and 16 grams of sugar. The fat and sodium content makes up 14% and 10% of your daily allowance, respectively, and on the vitamin and mineral front the slaw offers only a few modest numbers. It also contains egg product, so be aware if you have an egg allergy.

Chances are, though, that you don’t get mayo-based coleslaw for the low fat; you get it for the taste. And on that front this slaw delivers nicely. It’s creamy and tastes fresh, just like you’d get from a homestyle restaurant. It is sweet, but the vinegar in the mix also gives it just a bit of bite.

Little Salad Bar Homestyle Coleslaw is an easy recommendation. It has a creamy taste that makes it perfect for when you’re trying to reproduce a homestyle meal. Just keep in mind that while it’s high in taste, it’s also high in fat and sodium.