I like a good sandwich, but sometimes I want fewer carbs and fewer calories, and that’s when I like Aldi’s L’Oven Fresh Sandwich Skinnys. 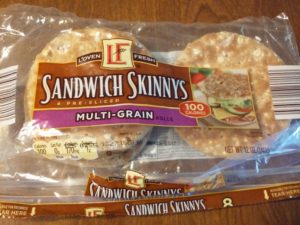 These are slightly wider than an English muffin but only approximately half an inch tall. They are skinny, as their name says. They come in an 8-pack, are pre-sliced for easy sandwich-making, and can be purchased in whole wheat or multi-grain varieties.

L’Oven Fresh Sandwich Skinnys are 100 calories per roll, with 170 mg of sodium, 1 gram of sugar, and no saturated fat. In contrast, Aldi’s Whole Grain White bread, which is popular in our house, has 140 calories per 2-slice serving, 260 mg of sodium, and 4 grams of sugar.

The packaging for the multi-grain Sandwich Skinnys variety promises 12 or more grams of whole grains per serving. The multi-grain rolls are made with ingredients such as whole wheat flour, unbleached enriched wheat flour, wheat, rye, corn, oats, millet, triticale, brown rice, and barley.

Aldi’s Sandwich Skinnys are a great choice if you want fewer carbs, fewer calories, or simply want to change up your sandwiches a little. They are best with lunch meat but would also work with tuna or chicken salad, humus, or whatever you like. While the bread is thin, it is hearty enough that you can put mayo and/or mustard, some cheese, a tomato slice, a few pickle slices, and lettuce on your sandwich without it falling apart. You’ll probably want to eat your sandwich right away, though, as the Sandwich Skinnys are more prone to getting soggy from mayo and other toppings. A fully assembled sandwich might not hold up as well in a lunchbox.

I’ve infrequently purchased Sandwich Skinnys for years with no problems. However, when I recently purchased the multi-grain Sandwich Skinnys, I did notice something unusual. A friend I had over for lunch found two or three very small tough, fibrous pieces in her bread. A few days later, I found one in my own sandwich. I’m guessing it was a piece of oat or barley or some similar grain. My friend described it as similar to when you eat a green bean that still has a stem end on it. We simply spit out the tough pieces and finished our sandwiches. As I mentioned earlier, I’ve never had a problem before, so I’m hopeful it was just an issue with that particular batch. 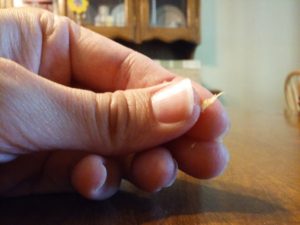 Aldi’s L’Oven Fresh Sandwich Skinnys are a lower-carb and lower-calorie alternative to regular bread. I like them because they are a little healthier, and they are a fun way to change up an ordinary sandwich. Sandwich Skinnys work well with lunch meat, chicken salad, or whatever sandwich toppings you like. I did notice a few tough, fibrous pieces of something that looks like a grain in the last package of Sandwich Skinnys I bought. I’ve bought Sandwich Skinnys for years with no problems, so I’m hoping it was just an issue with that one batch. Otherwise, these are recommended.