EDITOR’S NOTE: Read our review roundup of many of Aldi’s vegan Earth Grown products at this link. 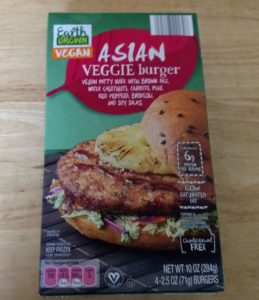 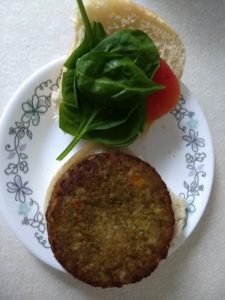 These Asian Veggie Burgers were good. I could taste the rice and water chestnuts, and seasonings were just right. The burger also has a good amount of crispiness, especially around the edges. It seemed to hold together without falling apart much better than the Earth Grown Vegan Southwest Quinoa Crunch Veggie Burgers, too.

They’re advertised as being low in saturated fat and cholesterol free, with 130 calories, less than .5 grams of saturated fat, 300 mg of sodium, 2 grams of sugar, and 6 grams of protein per serving.

The burgers should stay frozen until you’re ready to use them. They can be prepared in the oven, toaster oven, skillet, or microwave. The oven is the preferred method, and that’s how I prepared my veggie burgers.

To prepare in the oven, preheat the oven to 450 degrees. Place frozen burgers on an ungreased baking pan. Bake approximately 7 minutes until browned. Carefully flip and cook an additional 5 minutes until heated through and well browned.

To prepare in the toaster oven, preheat on broil. Place frozen burgers on an ungreased tray. Broil approximately 7 minutes. Carefully flip and cook an additional 5 minutes until heated through and well browned.

To prepare in the skillet, preheat a non-stick pan over medium heat. Cook until first side is browned, approximately 7 minutes. Carefully flip and cook an additional 5 minutes. Continue cooking, flipping as necessary, until heated through and well browned.

To prepare in the microwave, place one burger on a microwave-safe plate. Cook on high for 1 1/2 minutes. Carefully flip and cook 1 additional minute. The burger should be hot throughout but will not brown.