My daughter discovered the Specially Selected Premium Raspberry Fruit Spread when it was being served at a family gathering just before Christmas few years ago. She was so tickled by it that a cousin bought and wrapped a jar as a gift for her the past two years. It is apparently so delicious she has been known to enjoy a spoonful for dessert after a meal!

We recently noticed that Aldi has upgraded these Fruit Spreads from a Seasonal Favorite to an everyday Regular Buy, so we decided to try the other flavors as well. Since we often eat our waffles with jam instead of syrup, some bacon and fresh waffles was a great opportunity for taste testing! 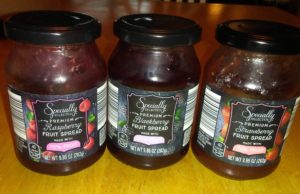 Each flavor of these Fruit Spreads comes in a 9.95-ounce jar and costs $1.99 (20 cents an ounce). This price point is interesting, as the variety of flavors typically reflect a larger difference in costs. For example, at Walmart 17.25-ounce jars of raspberry & blackberry natural fruit spread from Smuckers are $3.12 (18 cents an ounce) while strawberry in the same line is only $2.58 (15 cents an ounce). The Aldi spread is cheaper overall but is more expensive in terms of price per ounce.

These are labeled as fruit spread (rather than jam or jelly) and for a good reason! The consistency is perfect for spreading, closer to apple butter rather than gloppy like jelly. The first three ingredients are fruit, sugar, and pectin, which supports the claim of 75% fruit on the label. None of the three flavors of the Specially Selected Premium Fruit Spreads are overly sweet either, a good balance with the actual fruit flavor.

After sampling them all, raspberry remains our favorite. It has the same dark red color as a raspberry. The raspberry flavor is strong and slightly tart. There are small seeds, but they only help remind us that this is a fruit spread, rather than a jelly. 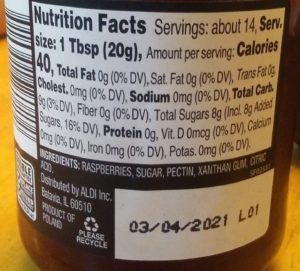 Blackberry is a dark purple color and is the sweetest of the three. However, the large size of the seeds kept this from being our favorite. We did not enjoy biting down on seeds, and it is impossible to avoid. 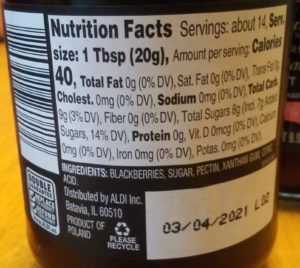 The strawberry flavor is recognizable without being overly sweet, and it is a transparent red color. This did not stand out as exceptional but is a good representation of what you expect from a strawberry fruit spread. While the flavor is similar to other strawberry jams and jellies, the consistency is what sets this apart. 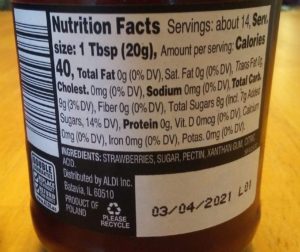 Overall, we were impressed with these fruit spreads. Now that we have tasted all three flavors, we have decided to continue purchasing the Raspberry Fruit Spread but will pass on the others. We didn’t enjoy the seeds in the blackberry and just weren’t impressed with the strawberry. These fruit spreads were all good on our waffles, and my daughter has found numerous other uses for her jam such as crepes, flavoring plain yogurt, and cookie filling.