Breakfast is an important meal, the first step toward whatever lies ahead for the day. Aldi has a robust selection of breakfast items, from staples like bread and eggs to premade items like sandwiches and pancakes and sausage on a stick. Around here, we generally prefer the staples, because they are cheaper, usually lower in things like sodium, and we can better season them to our tastes. But we also know that time can be of the essence, particularly in the morning, which is why premade foods are popular option for all three meals, not just breakfast. 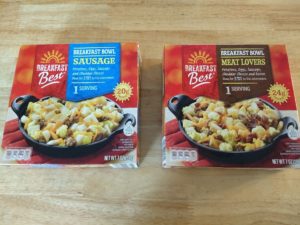 Breakfast Best Breakfast Bowls are an Aldi Regular Buy, meaning they’re in stores all the time. (Aldi also occasionally comes out with ALDI Find versions of the breakfast bowls, including Sausage & Gravy or Bacon.) They come in a box in the frozen section of the store. Each bowl contains about 7 ounces of food (a little less than half a pound) and currently runs $1.79 per bowl. That’s more expensive than if you were to make it yourself, but a little less than the $2.00 we’d pay for the Jimmy Dean equivalent at our local Walmart. (At our local Target the Jimmy Dean Breakfast Bowl is currently $2.69.)

These are, incidentally, meant to be imitations of Jimmy Dean Breakfast Bowls. Jimmy Dean sells both a sausage version and a meat lovers version … and, sure enough, so does Aldi. Even the cooking instructions for the Aldi bowls is more or less identical to the Jimmy Deans. We tried out both Aldi bowls.

The bowls tasted good, if not great. They heated evenly, and both the sausage version and the meat lovers version had a good balance of eggs, potatoes, cheese, and meat. We liked the meat lovers version better — the bacon in that mix enriches the flavor in our view — but both work. They’re also both a perfectly fine size for a breakfast, in our view.

In our view, a homemade bowl is going to taste better, but as far as frozen foods go this works.

What about nutrition? Processed foods are typically unhealthy, and these definitely fit the bill. Both bowls are, like their Jimmy Dean counterparts, very high in fat, very high in cholesterol, and high in sodium. (The meat lovers is higher in fat and sodium, while the sausage is higher in cholesterol.) They are a good source of Calcium as well as some Vitamin A and Iron, but that doesn’t exactly make up for the other stuff. And that doesn’t even take into account all the nitrates and other additives. 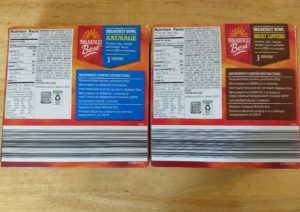 Breakfast Best Breakfast Bowls are a quick and easy way to start the day. They taste pretty good and cost less than their brand-name counterparts. On the other hand, they’re loaded with enough fat, sodium, and cholesterol that they’re probably best as an occasional food rather than an everyday meal.

Better yet, with a little time and effort you could easily make your own, which would not only be healthier, but would cost you a lot less … especially if you got the ingredients from Aldi.