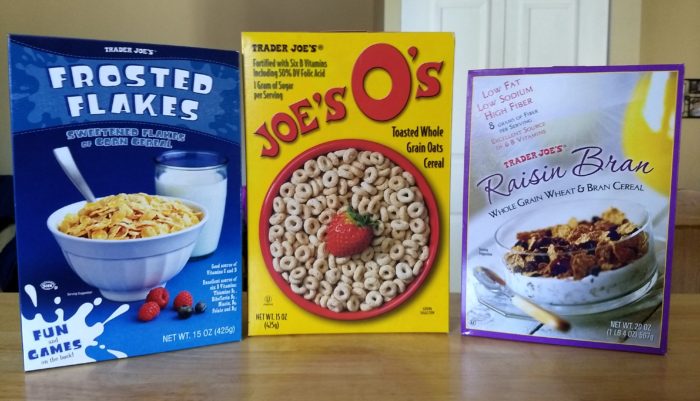 Your mother may have told you that breakfast was the most important meal of the day. The science behind that statement remains in flux, with some studies suggesting that skipping breakfast has no impact on diet but may impact heart health. We tend to be part of the crowd who thinks that breakfast is generally a positive thing.

We’ve written extensively about breakfast foods over the years, from the premade to the make-it-yourself. We’ve even written about cereal. However, up to this point, our breakfast coverage has been all about Aldi, since that makes up the majority of what we write about. We do occasionally write about Aldi’s distant cousin, Trader Joe’s, though, and we decided to take several of TJ’s cereals for a spin. 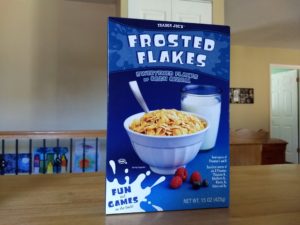 These were $1.99 at the time of writing. They’re an obvious imitation of Kellogg’s Frosted Flakes, and a pretty good one, too, as they do a solid job of capturing the Frosted Flakes taste. As you might expect, that comes at the price of sugar, as this cereal has 10 grams of sugar per serving and pretty good vitamins and minerals. It’s a product of Germany, and the box cautions that it contains wheat and may contain traces of milk and soy. 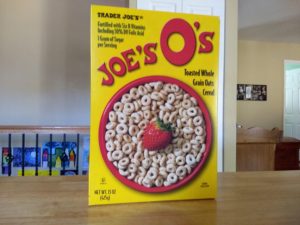 These were $1.99 at the time of writing. In addition to this classic variety, Trader Joe’s also offers Strawberry Yogurt O’s (see below), Hot Cocoa O’s, Multigrain O’s, Honey Nut O’s, and Organic High Fiber O’s. They are, as you would guess, an imitation of General Mills Cheerios.

Trader Joe’s O’s are surprisingly impressive. They have a really good taste and a nice texture; they’re better, in our view, than Aldi’s Toasted Oats and are one of the better generic imitations of Cheerios we’ve ever tried. In our view, they’re as good as — and, dare we say, possibly even a little better — than the name brand version. Better still, they have (like Cheerios) just one gram of sugar per serving, and have a decent assortment of vitamins and minerals. 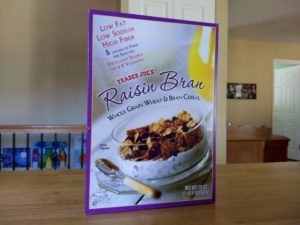 Trader Joe’s Raisin Bran was $2.49 at the time of writing. Like the previous two cereals, it’s not hard to figure out what this is meant to imitate, as Kellogg’s Raisin Bran is a staple in most grocery stores. Our first impression of this cereal, admittedly, was not the best: the bran flakes felt a little bland and we weren’t sure the raisins made up for it. It grew on us, though, and we would say that we came to like it, although we don’t think it is quite as good as some other Trader Joe’s cereals. It contains a whopping 16 grams of sugar per serving, although it counterbalances that with a 8 grams of fiber. It’s a good source of several vitamins and minerals, too.

Fair warning: the box notes that the cereal is made on shared equipment with soy, and in a facility that processes peanuts and tree nuts. 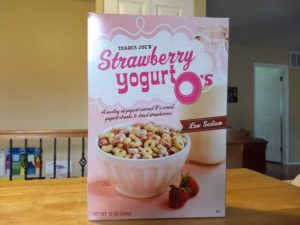 At 8 grams of sugar per serving, it’s not exactly the lowest-sugar cereal out there, but it’s better than a lot of other sweetened cereal options. Also, its coloring comes from purple and black carrot concentrate. We liked this so much that we’ll be buying it again. 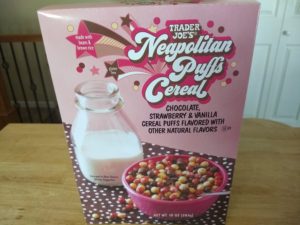 This was $3.49 for a 10-oz. box at the time of writing. It’s unique as far as cereal goes, featuring “chocolate, strawberry and vanilla cereal puffs flavored with other natural flavors,” according to the box front. The box states this cereal is made with beans and brown rice; the main ingredient is garbanzo bean powder, and it also includes navy bean powder, brown rice flour, and pinto bean powder. It also contains freeze dried strawberries, which I assume are integrated into the strawberry-flavored puffs. The cereal is gluten free, and Trader Joe’s suggests enjoying it with a side of fresh strawberries or a “drizzle” of chocolate syrup, or even sprinkling it on its “namesake” ice cream.

I thought this cereal was okay, but it didn’t quite live up to my expectations. It tastes more chocolatey than anything else. It’s not bad, though. At 9 grams of sugar per serving, it’s sort of medium on the sugar scale. Like many of Trader Joe’s other cereals, I appreciate that it uses carrot juice powder for color. 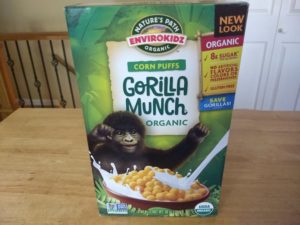 This sold for $2.99 for a 10-oz. box at the time of writing. This organic cereal is reminiscent of name-brand Kix, although not identical. It’s certified non-GMO and USDA Organic, with no artificial colors, flavors, or preservatives, and with 8 grams of sugar per serving (more than the 3 grams per serving in Kix). The ingredients are surprisingly straightforward: whole grain corn meal, corn meal, cane sugar, and sea salt. The whole grain corn meal is produced in a facility that uses tree nuts, peanuts, and soy, so those with allergies should be aware. Nature’s Path, which manufactures the cereal, also donates 1% of sales to environmental education and conservation projects that help endangered animals.

My kids really liked this cereal, and it disappeared quickly after I brought it home, so I’ll be buying it again. Besides enjoying the taste and crunch, my kids enjoyed reading the box, which is covered inside and outside with facts and games about gorillas and environmental conservation. The box also includes a link to the website for for the Dian Fossey Gorilla Fund where you can “adopt” a gorilla.

This cereal is not exclusive to Trader Joe’s. In my area, Target and Whole Foods sell it as well. 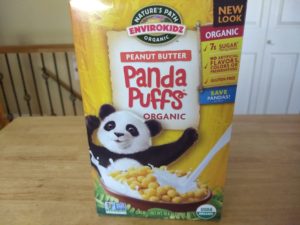 These are related to the Gorilla Munch Corn Puffs mentioned above, and they sold for $2.99 for a 10.6-oz. box at the time of writing. Like its cousin cereal above, this is certified non-GMO and USDA Organic, with no artificial colors, flavors, or preservatives, and with 7 grams of sugar per serving. It contains peanuts, not surprisingly, as well as soy. Nature’s Path, which manufactures the cereal, donates 1% of sales to environmental education and conservation projects that help endangered animals.

Also, this cereal is not exclusive to Trader Joe’s. In my area, Target sells it as well. 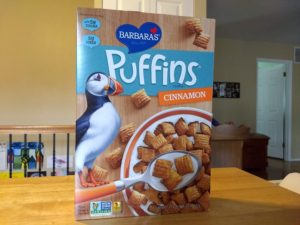 This was $3.99 for an 18-oz. box at the time of writing. Puffins cereal also is available in Original and Peanut Butter flavors. The Cinnamon variety we tried has a strong cinnamon flavor, and what makes it unique is that you really taste the cinnamon rather than a lot of sugar mixed in with cinnamon.

At 5 grams of sugar per serving, this seems like a good option if you want cereal that has some sweetness and flavor without a lot of sugar. My kids, though, said this cereal was just okay and not great. I do think I’d like to try the Peanut Butter Puffins variety next.

Also, Barbara’s Puffins are not exclusive to Trader Joe’s. They can be purchased at regular grocery stores in my area, as well as at Target.

All of these cereals turned out to be a pleasant surprise. The Frosted Flakes were solid, the O’s were as good (and maybe a little better) than generic Cheerios, and the Raisin Bran grew on us over time. Our family really enjoyed the Strawberry Yogurt O’s, Nature’s Path Envirokidz Gorilla Munch, and Nature’s Path Envirokidz Peanut Butter Panda Puffs. The Neapolitan Puffs and Cinnamon Puffins were decent as well.

Overall, all of these are solid cereals and worth a look.