Why I Love Trader Joe’s Houseplants

When you visit Trader Joe’s, what’s the first thing you see when you walk in the front entrance? You might think you’ve walked into a florist’s shop, with colorful cut flower bouquets and potted plants of all kinds lining the entry. It’s a lovely way to start your grocery shopping trip, and you’ll probably be tempted to bring home a few new plant friends.

Most of my houseplants have come from Aldi, which is a cousin to Trader Joe’s, but during a TJ’s run a couple of months ago, I decided to purchase a few Trader Joe’s houseplants to add to my collection. Trader Joe’s sells different kinds of houseplants all year, while Aldi sells plants only occasionally.

It took a few minutes to decide which plants to purchase at Trader Joe’s, and one of my kids who is a budding houseplant enthusiast and gardener offered some input.

Would we opt for the large potted orchids for $17.99? I wasn’t sure I wanted to go for these because I can generally buy orchids at Aldi for between $10 and $12, although Aldi does not stock orchids all the time. Still, the Trader Joe’s orchids are a better deal than what I’d find at many garden centers, where orchids start around $20 and go up significantly from there. 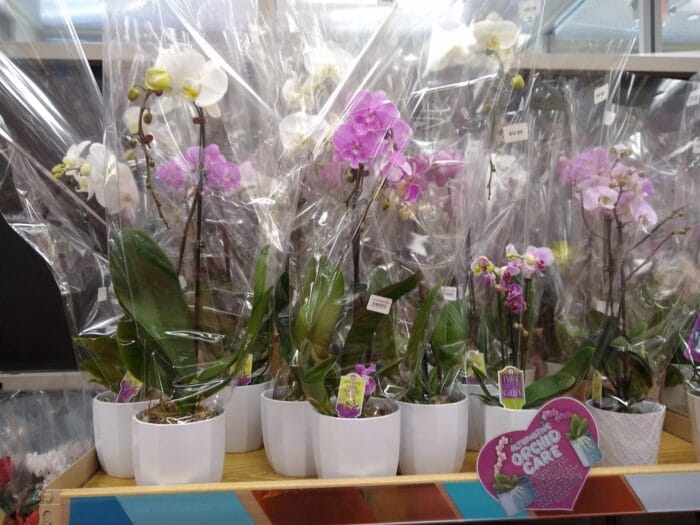 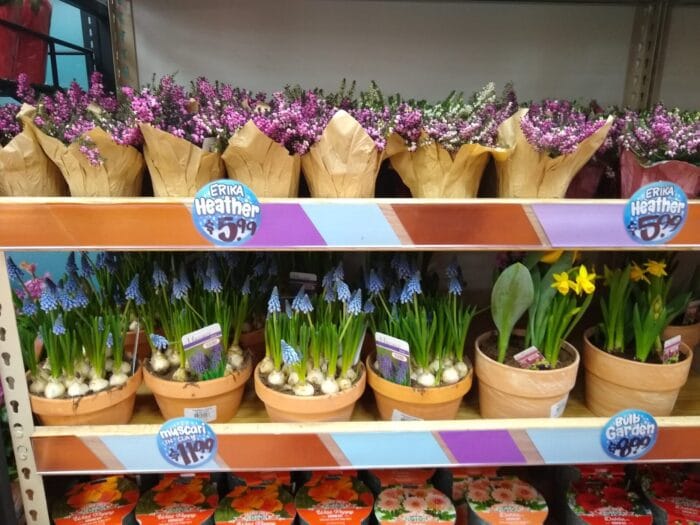 We ended up choosing a small pot with a mini orchid and a tiny crispy wave fern — my receipt called it a “mini orchid garden” — for $9.99.

This mini orchid garden was grown in Canada, according to the plastic wrapper it was sold in. Like most orchids, the blooms on this orchid lasted for months. I purchased it in mid February, and it still had a few lingering blooms in mid April. Orchids are easy to care for if you place them near a window with bright indirect light and give them about 1/4 of a cup of water a week. 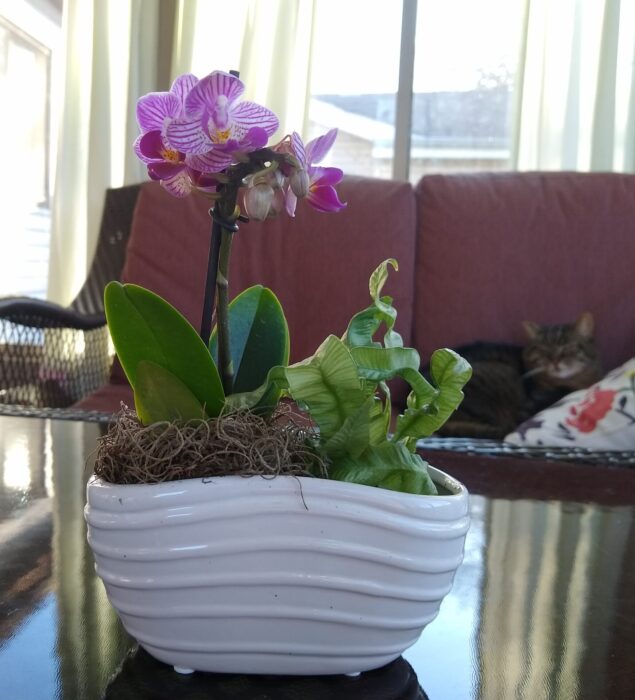 TJ’s mini orchid garden, with the Aldi Reviewer Cat snoozing in the background. 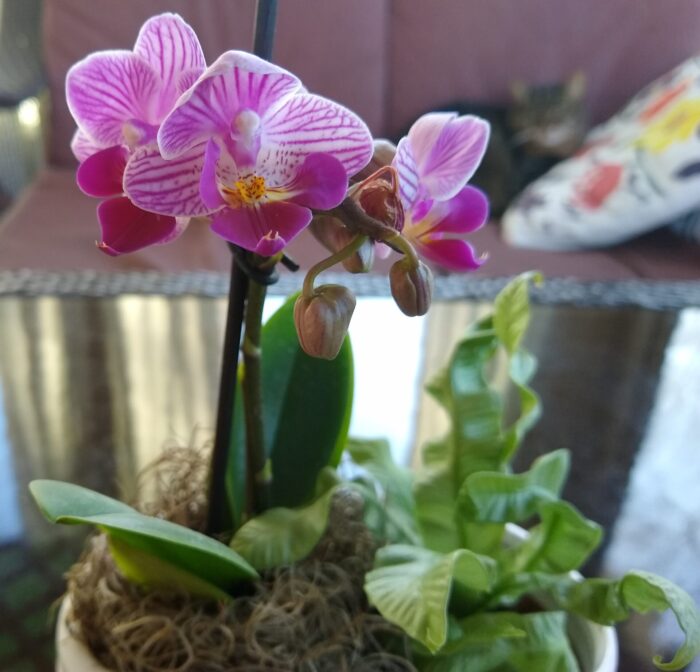 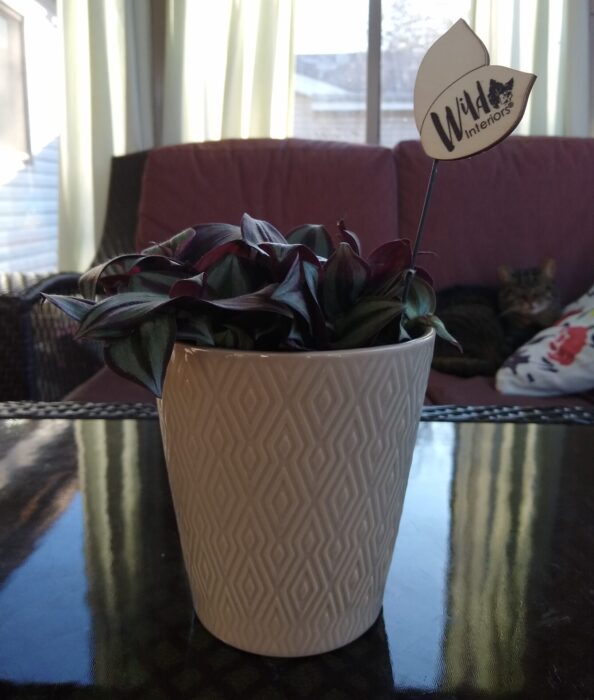 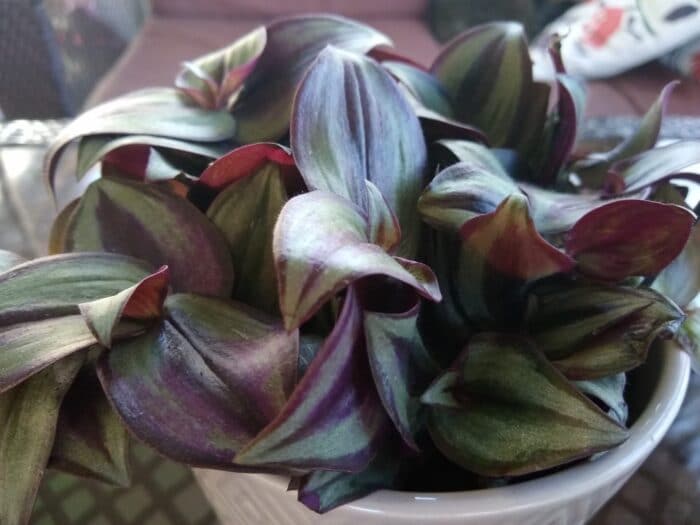 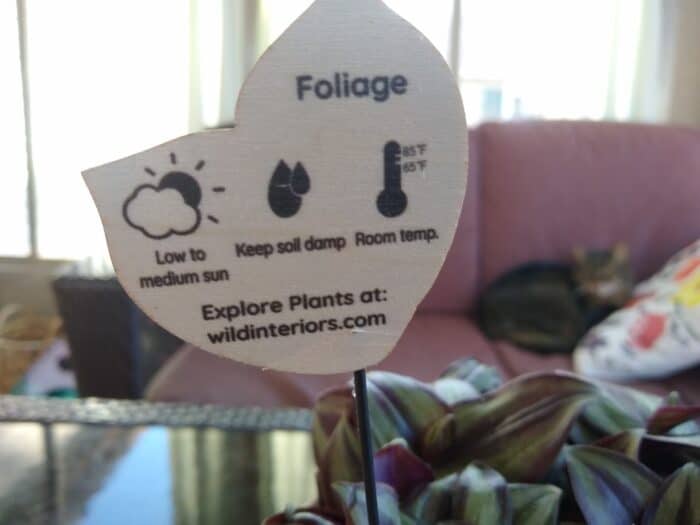 So far, my Trader Joe’s houseplants have been a nice addition. I placed them on an Aldi laundry cart-turned-plant stand, and they add a pop of color and greenery to a large window.

My TJ’s houseplants were in great shape when I purchased them, and they still look healthy after several months in my home. I appreciate the quality of the houseplants and the variety, and I’ll consider buying more houseplants on my next Trader Joe’s run.

Trader Joe’s sells houseplants of all varieties, from orchids to inch plants to potted bulbs and more. I own a few Trader Joe’s houseplants, including a mini orchid, a crispy wave fern, and an inch plant. They’re reasonably priced, healthy, and available in many different types and sizes. If you’re looking to add some greenery and style to your home without spending too much money, give TJ’s houseplants a look.