That wouldn’t have changed my purchase, though. This is pretty different. And since I’m a fan of eggs, sausage, and cheese, this is an easy one for a test meal. 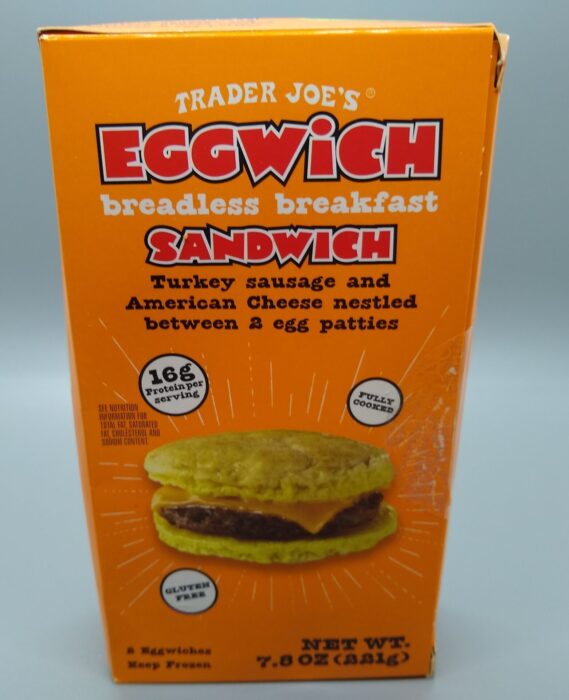 Trader Joe’s Eggwich Breadless Breakfast Sandwich costs $4.99 in a 2-pack totaling 7.8 ounces. That’s $2.50 per sandwich, or about 64 cents an ounce. Granted, it’s all meat and cheese, but this is definitely a premium price for a product.

There are two ways to cook it. In the microwave, you remove the wrapper, wrap in a damp paper towel, and place on a microwave-safe plate. Then you heat for 50 seconds, flip the Eggwich, and heat for 50 more seconds, or until the internal temperature reaches 165 degrees. Let sit for 1 minute before eating.

To heat in the toaster oven or conventional oven, preheat the oven to 350 degrees. Remove the wrapper and place the Eggwich on a foil lined tray that has been lightly coated with cooking spray. Heat until the internal temperature reaches 165 degrees, which the packaging says takes approximately 20 minutes. You should flip halfway through heating. Let sit for 1 minute before eating.

Most morning folks aren’t going to wait the oven preheat time + 20 minutes to make an Eggwich, so I went the microwave route.

I cooked both of them together. They took longer than 1 minute and 40 seconds. Both took closer to 2 minutes 30 seconds, and one of them we had to heat for a few seconds longer because it wasn’t quite hot. 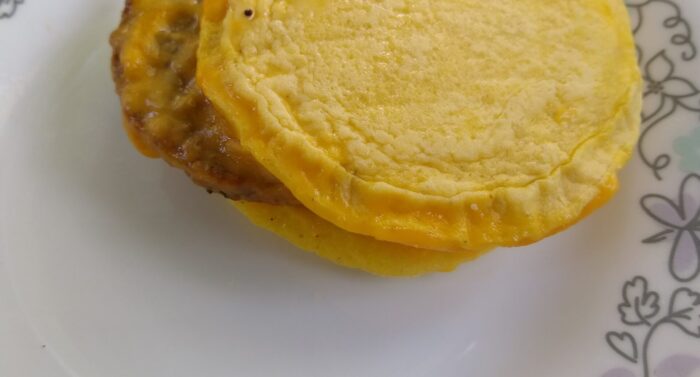 But they’re not bad. I figured two eggs would be pretty greasy, but it’s not as greasy as I feared. (You’ll still want a napkin, though.) It’s got a nice taste to it. Good eggs, seasoned sausage, and good cheese. I think I could do about as good making the thing myself, but it’s pretty solid for a frozen food.

Nutritionally, it’s got plenty of fat, cholesterol, and sodium, but it is low on carbs. 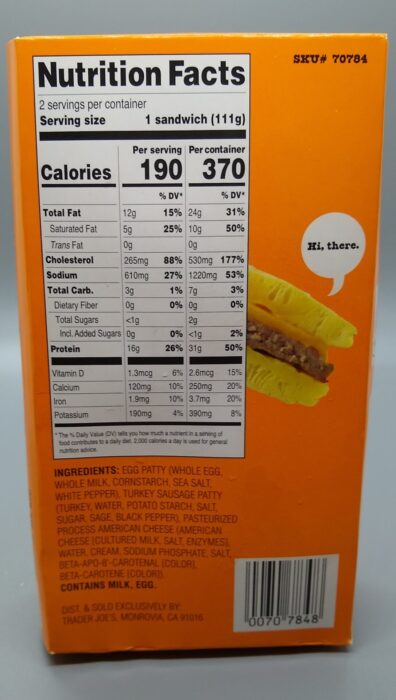 Trader Joe’s Eggwich Sandwich is a twist on the traditional breakfast meal. It tastes good, is low in carbs, and isn’t as greasy as I would have expected. It has its drawbacks, though: it’s pricey and can take longer to cook than advertised. For my money, I’m probably more likely just to make one myself from scratch, but if you need something fast this is worth a look.