If you want a taste of fall but aren’t a fan of all the pumpkin-spice things, Trader Joe’s, Aldi’s cousin, has something else for you. Trader Joe’s Apple Cider Jam is like a cross between applesauce and apple cider, and it’s a versatile product, great for eating on toast, or for putting on top of pork chops, or perhaps eating with a spoon straight out of the jar. 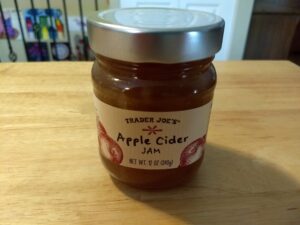 Trader Joe’s says it’s a combination of apple chunks, apple cider, and fall spices, and they recommend it on toast, pastries, or used to “spice up a pork or chicken recipe.” When I paid for my groceries, the Trader Joe’s employee at the checkout mentioned he had eaten some of the apple cider jam on pancakes and thought it was good.

The appealing smell caught my attention when I first opened the jar. It smells like spiced apple cider, as it should. It’s lovely. I could also see the soft diced apple pieces in the jar, and they spread nicely over my buttered English muffin for breakfast. It’s a chunky jam, but not too chunky.

It would be nice if Trader Joe’s specified what “spices” are in the jam. Are they cinnamon? Cloves? We don’t know. 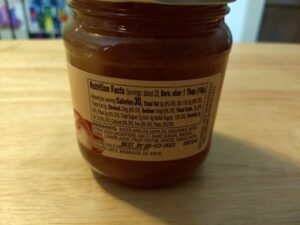 It’s easy to eat more than the 1-tablespoon serving of this jam. I probably ate two or three tablespoons on my English muffin. So adjust the nutritional information accordingly.

Trader Joe’s Apple Cider Jam is delicious! It’s good on toast, English muffins, pancakes, waffles, or pastries, or put it on top of pork chops or chicken. I only wish Trader Joe’s would be more transparent with the ingredients list, which says the jam has “spices” but does not specify what those are.