Batteries are expensive. When I shopped around online for a name brand AA battery, even a large pack typically ran more than 50 cents per battery. And when I went in to my local Walgreens to get an 8-pack of Duracell batteries, I paid a dollar per battery … and that was when they were on sale.

Generic batteries are generally cheaper. Amazon sells generic AA batteries for about 30 cents a battery, while Rayovac, a budget battery maker, sells batteries that can be found in Walmart for as cheap as 24 cents a battery sometimes. 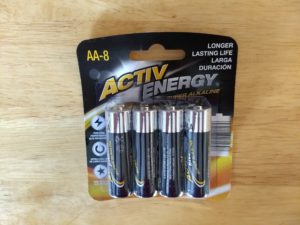 Activ Energy Super Alkaline Batteries are a Regular Buy, which means you can find them in stores all the time. I’ve seen Aldi carry AA, AAA, and 9V batteries. (It’s possible they carry C or D cells, but I haven’t seen them.) At the time of this post, an 8-pack of AA or AAA batteries runs $2.49. That comes out to 31 cents a battery. That’s a pretty competitive price, especially when you consider that the price-per-battery numbers I mentioned before for Amazon and Rayovac can only be had if you buy bulk packages of 48-72 batteries. Outside of Aldi, the only AA or AAA 8-packs I know of that are cheaper per battery are from Dollar General.

Side note: Aldi sometimes packs batteries in with products that need them, and in those instances those batteries are virtually always Activ Energy.

Aldi batteries come in your typical battery packaging: clear plastic front, paper back. The batteries themselves contain your usual battery information, including voltage specs and all the usual warnings about how you shouldn’t throw them in a fire. Each battery also lists the country of manufacture (China) as well as the expiration date. The batteries I bought had an expiration date of a little over 6 years from the date of purchase, which I think is reasonable for an 8-pack. One small nit: the expiration date on the Aldi batteries is in smaller print than, say, Duracell. 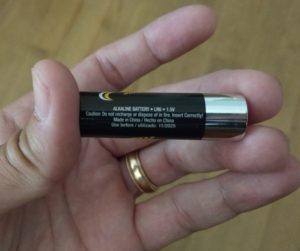 Beyond price, though, the real test of a battery is longevity. How long does it last? To test that, we purchased a pack of standard AA Duracell batteries and put them up against the AA Activ Energy batteries. Our testing devices was a single LIGHTWAY 300 Lumen LED Flashlights, which we purchased from Aldi a while back. The flashlight takes 4 AA batteries. 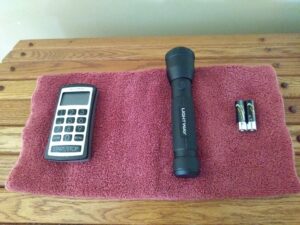 Our hypothesis was that the Duracell batteries would outlast the Aldi batteries.

Here were our results:

What to make of this?

It’s important to note the limitations in our test. It’s just one test, and in different devices — like other flashlights or remotes — we might well have different outcomes. But the results mirrored what we suspected would happen: the Aldi batteries dimmed first and died first. The death time for the Activ Energy batteries was closer to the Duracell than the dim time, but the Aldi batteries were in pretty bad shape on the last day, moreso than the Duracell.

If you’re looking for cheap batteries, Activ Energy Super Alkaline Batteries are definitely cheap. They are priced competitively compared to other budget batteries, especially when you take into account the fact that you don’t have to buy a huge pack to get a low per-battery price.

However, our test indicates that you get what you pay for. Although Aldi batteries do seem to last a while, they did not outperform the Duracell batteries we tested them against. Further testing is probably needed — and we’d love to have readers do their own tests on other devices — but at the very least this suggests that if longevity is your primary concern, you’ll probably want name brand.

On the other hand, if you are putting batteries in a device that you only use on rare occasion — the kind of device where the batteries are more likely to leak acid from age than to drain — then the Aldi batteries might be worth a look.