Aldi Australia Rolls Out Online Shipping For Some Products

One of the most common questions we get here in the United States is, “does Aldi ship its products online?” The answer, we reply, is no, although you can have in-stock items delivered from the store through Instacart. This is true of Aldi in most other countries, except for the United Kingdom and in small parts of China.

You can now add another English-speaking country to the mix. In May of 2021, Aldi opened up an online store for customers in Australia. As of right now, the site is only shipping to select cities in Australian states along the country’s east coast, where most of the population lives. Those states are New South Wales (which includes Sydney), Victoria (which includes Melbourne), and Queensland (which includes Brisbane).

As of now, the site offers just a handful of bigger-ticket items and, unlike Aldi UK, it does not currently allow for product reviews on the Aldi site itself. These products are only on the site for a short time and are online exclusives that can’t be bought in stores like other limited-time products, which Aldi Australia calls Special Buys. Americans will be interested to know that, at the time of this post, online items include a single-handle kitchen faucet — the Aussies call it a sink mixer tap — as well as a washing machine. One of the first items sold on the site was a French door-style refrigerator. 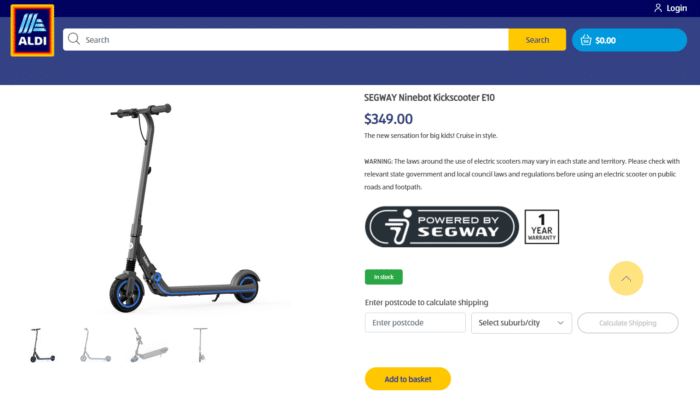 A Segway from Aldi, anyone? (Credit: Aldi Australia)

Americans should also be aware that, at press time, the exchange rate of the Australian dollar to the U.S. dollar is about .75 to 1, so something that costs 100 Australian dollars will cost 75 American dollars. (The Segway up above would cost $261 in the States.)

According to Aldi Australia, the site is the first step toward a larger future program, although the grocer hasn’t specified what that will look like.

As for the United States? So far, Aldi US has made no indication that it plans to sell products online. There would definitely be hurdles here: not only is America about 27% larger than Australia, but it also has 13 times as many people. The combined population of the three states in the Aldi Australia online pilot is roughly 19 million, and not all of those people are in the metro regions Aldi will ship to. For comparison, New York state alone has around the same total population, and other states like Florida, Texas, and California are much larger. (Texas and California have more people in each of their states than Australia does in its entire country.)

In short, online shipping would be a much bigger operation in the U.S. than in most other countries, and if it did happen, it would almost certainly be a regional pilot like China and now Australia are doing.

In the meantime, we expect Aldi Australia to continue to grow its online offerings. We have no doubt that other Aldi regions will be watching with interest.