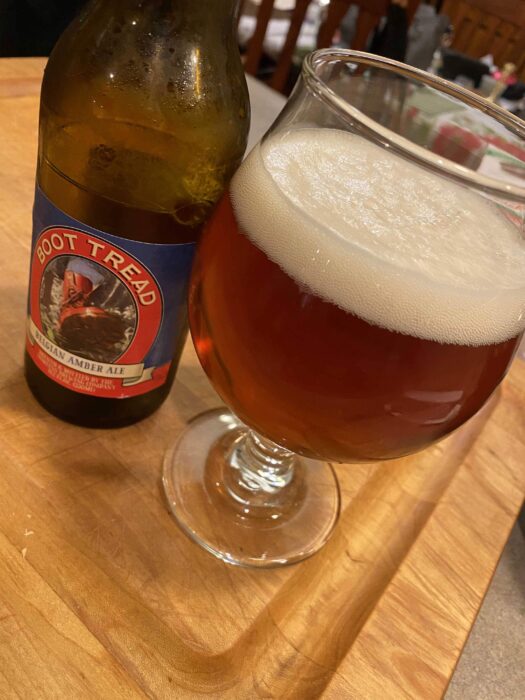 This is a guest post by Mike. The Aldi beer Advent calendar made its U.S. debut in November of 2019 as an ALDI Find, retailing for $49.99.

Last year (2018) my wife and I tried our first booze Advent calendar in the form of the Aldi wine calendar. It was OK, but not one I would have bought again: I felt the wines were too repetitive and the bottles weren’t quite large enough for sharing over dinner or whatever.

This year (2019) was different. My mother-in-law managed to score the beer Advent calendar at the Aldi in Valparaiso, Indiana (they had three left by the time she got there). The heft of it showed right away that this would be a full-size beer every day! And it was true: 24 12-fluid-ounce bottles, waiting to be revealed each morning (because we wanted them to chill while we were at work, not because we were pouring them on our corn flakes. I have my dignity).

We were also pleased to find that no beer was repeated more than once. In some instances, the repeats were great, since there are some really good finds to look for in the new year (which I suppose is part of the point).

Below is a list of the beers in this year’s calendar and my thoughts on which ones I hope won’t come around just once a year. I have rated them all on a scale of 1 to 5 Aldi quarters.

Boot Tread Amber Ale: 5 quarters. The best of the bunch. My wife and I argued over who got to drink these (luckily there were two). Smooth and malty, full flavor without weighing your palate down. Look for this one.

1758 Belgian IPA: 4 quarters. My third place beer for the whole calendar. Hoppy, citrusy, fruity, but doesn’t punch your taste buds in the face. I wish this had been repeated. Look for this one in your store.

Broegel Bock: 3 quarters. Pretty smooth and sweet, but with some toastiness to balance out the sweet. This one’s good if you’re having a couple.

Sezoens Dry Hopped Blonde Ale: 3 quarters. I’m not a huge fan of dry hopped beers, or farmhouse ales in general. My taste aside, this one was really dry and fruity, but still bitter. Almost like a cider.

Kinroo Belgian White Ale: 4.5 quarters. This was my second favorite (enough that I stole the second bottle for myself. It wasn’t my wife’s favorite, so she was cool with it. She likes IPAs more than I do anyway.). Light, smooth, citrusy, fruity, floral, and fragrant! Easy to drink. Smelled like flowers.

Bacher Lager: 4 quarters. I’ve always liked lagers but, sadly, so many have gone the route of tasting skunky or super thin. Not this one. It’s still light and clean, but with a pleasant sharpness and hop character to make you feel like you’re drinking a beer and not just yeast water.

Wernesgruner Dark Schwarzbier: 2.5 quarters. This one was smooth but tasted too much like molasses for me.

Wernesgruner German Pilsner: 3 quarters. This beer was the first out of the box. Light, clean smooth malty and a little sweet. Not a bad way to start. A bit thin maybe.

Licher Hefeweizen: 2.5 quarters. One caveat: I cannot STAND hefeweizens. At their best, they taste like gone-over bananas to me, but most of them remind me of circus peanuts and burnt hair. So, take my rating with a grain of salt. This beer is definitely better than I think it is. I’ll keep my description straightforward, though, so if you do like hefeweizens, you can draw your own conclusion. This one was sweet, and tastes included banana and cloves. Fairly smooth and light, though.

O’Shea’s Irish Stout: 3 quarters. Strong flavor and smelled and tasted kind of peaty. If you’re OK with that, then go for it.

O’Shea’s Grapefruit India Pale Ale: 3.25 quarters. A lot of grapefruit beers overdo the grapefruit, in my opinion. This one did not. More generic citrus than grapefruit (though you could taste grapefruit) but also very clean tasting. Though I am so tired of so many IPAs, this one wasn’t bad. It would be even better when the weather is warmer.

O’Shea’s Double IPA: 3 quarters. Hoppy, bitter, and really strong. Not my favorite, but if you like IPAs, you’ll probably like this one.

The Aldi Beer Advent calendar was definitely worth the $50 price (a little more than $2 per beer, but you can’t put a price on fun) and the effort to track down. Of the beers, the top three worth looking out for are the Boot Tread Amber Ale, the Kinroo Belgian White, and the 1758 Belgian IPA. Honorable mention is the Licher Hefeweizen. Even though I’m not a fan of the style, if you are, this one’s pretty good.

Mike Petrucelli is a food writer, homebrewer, and home cook with a day job in nonprofit communications. He lives in Northern Indiana with his family.