Salmon is one type of fish — besides shellfish — that my family will readily eat. Its mild flavor and meaty texture can’t be beat. In my house, we eat a lot of Mediterranean Herb Atlantic Salmon purchased at Aldi, and it’s a family favorite. Aldi also frequently sells salmon, both plain and sometimes seasoned, on cedar planks. Cooking salmon on cedar planks imparts a specific taste to the fish . . . and because cedar planks are pre-soaked in (usually) water before cooking they also help to steam the fish. I’d never tried cedar plank salmon before, so when Aldi sold it again recently, I figured there’s no time like the present.

This is a Fresh Meat & Seafood Special at Aldi, which basically means it’s an Aldi Find that is only available for a short time. Aldi seems to sell cedar plank salmon fairly often, though, so you if you’re looking for it, it might take a little patience, but you won’t have to wait a year to find it again as is the case with many other Aldi specials. 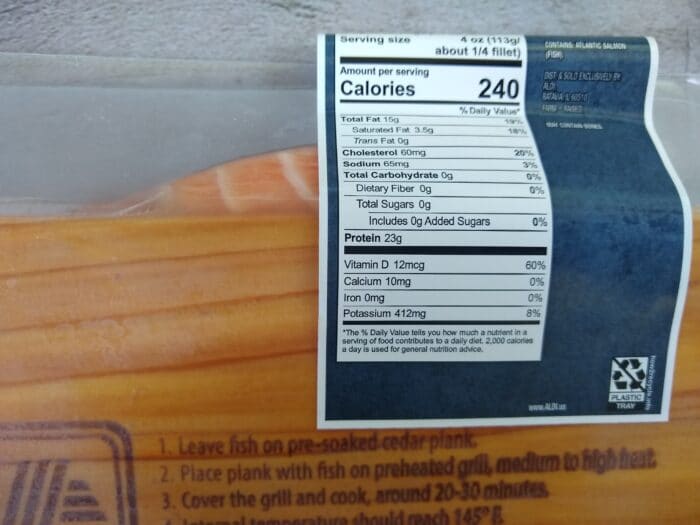 The package only has instructions for grilling. To grill, remove all packaging but leave the salmon on the pre-soaked cedar plank. Set the grill for indirect grilling and heat to medium-high. Place the cedar plank with fish in the center of the grill. Cover the grill and cook until the salmon is cooked through, around 20-30 minutes or until the internal temperature reads 145 degrees Fahrenheit.

After purchasing this salmon, I realized our small grill does not have an indirect heat option. But never fear. You can also bake cedar plank salmon, and the internet is full of instructions for how to do so.

I preheated our oven to 400 degrees and placed the salmon and the plank on a baking sheet. I seasoned the salmon with a drizzle of olive oil and a sprinkling of salt, pepper, fresh minced garlic, paprika, and thyme. Then I baked the whole thing for 15-20 minutes until the internal temperature was 145 degrees. 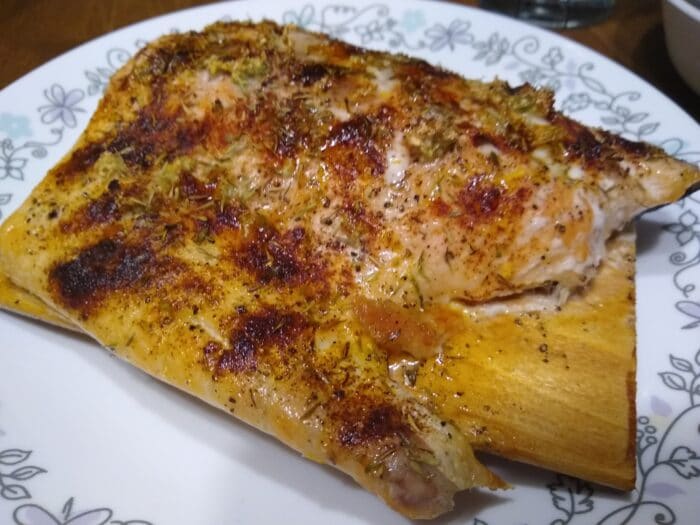 Salmon after seasoning and baking.

This salmon was tender and moist, and the cedar imparted a mild woody flavor while the seasonings I added were spot on. It is not always easy to get my family to eat fish, but they liked this as well as I hoped they would, and I thought my seasoning mix worked well. I’m not sure if this will replace our favorite Mediterranean Herb Atlantic Salmon, but it’s a good option if you want salmon.

The Aldi Cedar Plank Atlantic Salmon Portion comes on its own wooden plank and can be grilled or baked. This particular variety we tried is sold unseasoned, and we added salt, pepper, garlic, paprika, and thyme before baking. It turned out moist and flavorful. This is a decent option if you want fish, and the cedar plank gives it a unique flavor.