UPDATE (12/3/2018): Aldi is known to tweak its formulas, and it has here. While they are still as seasoned as ever, Aldi’s supplier has reworked the fries and they now have a lot less kick than they did before. You can still add kick if you want, but if you’re like me and you like mild, you’ll like these a lot more now.

Aldi rotates a few different french fry styles through their inventory as part of their Special Buys, most of them under Season’s Choice but also occasionally under other labels. Those fry types include steak fries, curly fries, and even more chic types like herb and olive oil.

In the Regular Buy category, there is this one. Aldi’s french fries, the Season’s Choice Seasoned French Fries are always available, and they are pretty good … although there is one small detail about them that you should know. More on that in just a moment. 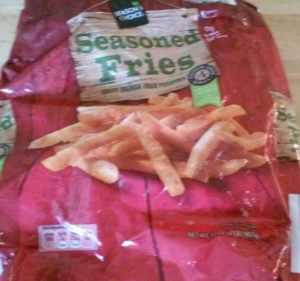 First, let’s talk prep. They’re french fries, and they cook up like most french fries. You can bake them or put them in the deep fryer. The fryer probably tastes a little better, but baking is a little healthier and they come out pretty good from the oven anyway. They take a little bit of time to cook if you go the oven route: 10 minutes at 425 degrees, then 10 more minutes at 425 after you flip them.

So the real question: how do they taste? They’re crisp, they have a good potato flavor, and they have a seasoning a bit like what you’d get from fast food curly fries.

But the one little detail: they’re a little spicy. The seasoning has some kick. I was a little surprised the first time I tried them, because for a staple Regular Buy, I would figure these to be mild french fries. But they’re not, and if you want something mild, you’ll either have to go with a Special Buy (if there is one) or try Aldi’s crinkle cut fries. Alternatively, a little ketchup does help to dampen down the spice a little.

They’re crisp with a nice seasoned flavor, but they also have a little spice, which might be a drawback if you don’t like kick. Depends on your tastes.