I don’t eat out often, in large part because I can make so much of it almost as well at home. Earlier this summer, though, I bought a funnel cake from a carnival. I figured funnel cakes were one of the few things I couldn’t make at home.

And then I found this: 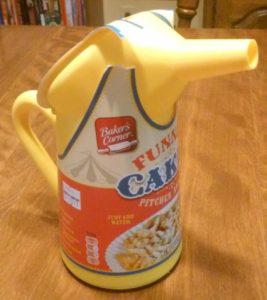 It turns out that Aldi sometimes sells funnel cake mix, and in a very inexpensive all-in-one package, no less.

I tried it out.

The mix was less than half the cost of a standard funnel cake at a carnival (about $2.50 where I bought it) and claims it’s good for 8-10 cakes. The instructions call for mixing all of the batter at once. Because funnel cake batter doesn’t freeze well — and since most people probably aren’t going to eat 8-10 cakes — this does limit you a little. Like I said before, though, at least it’s cheap.

Baker’s Corner Funnel Cakes has instructions for both deep fryers and skillets. It comes with a plastic pitcher and a plastic pouch inside containing the mix. You pull the mix pouch out, pour it in a bowl, add some water, mix it until thick, then pour it back into the yellow pitcher, which has a spout for pouring when you make the funnel cakes. Then you heat up your oil, pour your batter in, and make funnel cakes.

Disclaimer: I’ve never made funnel cakes in my life. Still, the instructions seemed easy enough. Since I don’t have a deep fryer, I went with the skillet method. The instructions called for 3″ of oil in the skillet, which sounded both terrifying and a little expensive. Instead, I went with a little less than an inch (I used vegetable oil), and I went with a Dutch oven in case the oil splattered. (It did, but only a little.) I heated the oil to medium, double-checking the temperature with a digital thermometer, then poured the batter in.

The instructions said 30 seconds or so on each side, but I found through trial and error that a minute or so was better in achieving real funnel cake-like crispiness. Then we pulled the cake out, garnished it with powdered sugar, and ate.

The good news: it tasted like a funnel cake. My early attempts were a little softer, so the consistency wasn’t quite as crisp, but the taste was there, and with subsequent experiments I was able to perfect the texture, too.

The bad news: I only got four tries, or half of what the packaging promised. Now, it’s possible that I somehow overdid my funnel cake pouring, especially early on, but none of mine were as large as a carnival funnel cake. So while the packaging says 8-10, understand that you’re talking 8-10 pretty small funnel cakes, not 8-10 of those monstrosities that multiple people can eat off of.

It’s still a whole lot cheaper than buying them at a fair. And pretty tasty, too.

Baker’s Corner Funnel Cakes Pitcher and Mix makes really good funnel cakes at less than half the cost of what you’d pay at a carnival, even if it doesn’t quite deliver on the promised quantity. As a bonus, the yellow plastic pitcher has any number of post-funnel cake uses, such as a watering can for the garden or a child’s bath toy. If you like funnel cakes, go for it.