EDITOR’S NOTE: This review is for the 2016 version of the weather station. The 2017 appears to have some small differences in design but is mostly similar. As of right now the only version of the station to have a manual available online is the 2015 version, which you can find here.

UPDATE 1 (October 1, 2017): After over a year of use, our weather station mostly still works well. One notable exception is the outdoor humidity reading, which no longer is accurate. The rest of the review still holds true.

To prove the point that Aldi sells a little bit of everything: one of their occasional Special Buy items is a digital weather station. The brand is Sempre, which produces other small electronics, like alarm clocks and watches, for the grocer. 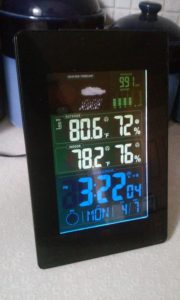 The Sempre Digital Weather Station, at least in this model year, came in four different variations: white horizontal, white vertical, black horizontal, black vertical. The picture above is the one I bought, the black vertical. All four variations had the same information, just with different layouts. The station retailed for $20 in the United States.

I bought the Sempre station to replace an old brand-name that had finally worn out. I wasn’t sure what to expect from the Sempre, especially since weather stations, even name brand ones, can be a little dicey on the review front. But I took the risk, and I figured that with a 3-year-warranty, I’d have some options if things went wrong. (You can find both the manual and warranty information for the 2015 version here; as of right now the 2016 manual is not available online.)

Setup was easy — easier, in fact, than my previous brand-name station. I placed the station in my house, placed the sensor in a covered space outside as the instructions said, then began powering things up. The outdoor sensor runs on AA batteries; the station runs on either batteries or AC, so you have a lot of options for location.

Once the batteries were in and the correct buttons pressed, the station started picking up the remote sensor pretty quickly. Configuring the station’s time, date, and other preferences was also easy, thanks to a straightforward manual.

My first impression upon firing it up: it looks cool. It’s bright, colorful, and full of data. If you like precipitation projections and daily high/low stats, you can get them easily. The station automatically keeps time using an atomic clock frequency broadcast through the United States, and the station has done that reliably, something my previous station did not. Temperature has been pretty close to my local National Weather Service location for the most part. The humidity seems a little more off (for a stretch it was a double-digit discrepancy), although it depends on the day.

As for the precipitation predictor? Probably about 70% accurate, which is in line with other weather stations I’ve owned.

One problem with the station is that it was obviously developed with another continent in mind. The day/date display, for example, is inverted compared to North American sensibilities, and the default temperature readout is Celsius. The day/date setup can’t be changed. The temperature can … at least on the inside. 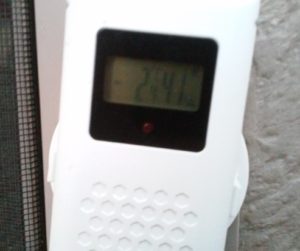 Unfortunately, the outside sensor also has its own self-contained temperature readout, but it only reads in Celsius and we don’t see a way to change it to Fahrenheit. (Some readers have reported seeing a switch on the inside near the batteries, but our model doesn’t have such a switch.) This is great if you’re trying to adapt to the metric system, but not so great if you’re trying to determine what minus 2.4 degrees Celsius means. (Hint: about 28 degrees.)

Overall, though, it’s a pretty good station and it performs about on par with more budget-minded weather stations that are twice its price.

You’ll probably want something higher-end if you’re a real weather enthusiast, but if you like knowing what’s going on outside and you want a cool display to show it, you could do a lot worse for the price. Recommended.