My favorite beverage at Starbucks is a Cafe Misto, which is half regular coffee and half milk that has been whipped slightly, creating a light foam on the top. It has less milk than a latte, which is mainly milk with a shot or two of espresso, so you get more coffee flavor. I prefer it with almond milk, but it can be made with any type of dairy or non dairy milk.

I’ve tried recreating a Cafe Misto at home by pre-warming my almond milk, but it’s not the same. I’ve also tried inexpensive, hand-held milk frothers, but they’ve never worked well. So I was interested, if slightly skeptical, to try the Aldi Ambiano Retro Milk Frother.

At the time of publication, the Ambiano Retro Milk Frother sold for $24.99, which is less than most other retro frothers out there. It’s part of a line of retro-inspired kitchen appliances that include a coffee maker, toaster, portable blender, citrus juicer, egg cooker, immersion blender, and electric water kettle. It’s an Aldi Find, so once stores have sold out, they won’t restock more, and Aldi does not offer online shipping. 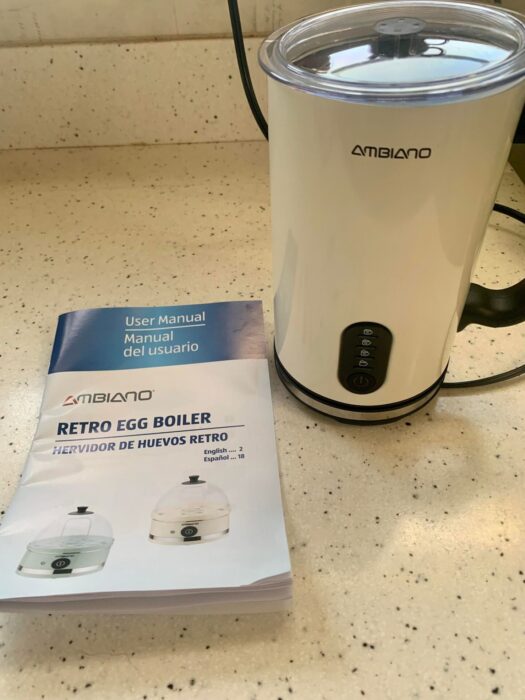 My grandparents certainly never heard of a milk frother, so the “retro” part of this appliance is in its style, not its functionality. It has a plastic exterior that mimics the colorful enamel surfaces that were very popular in the mid-20th century. It is offered in two colors, Sage Blue and Cream. I bought mine in Cream because it coordinates better with my kitchen, but both colors are attractive and reminiscent of the 1950s.

The frother consists of two basic parts: a base that plugs into an electrical outlet to provide power, and a jug that holds the milk. Inside of the jug, you find a reservoir with a metal whisk that spins to froth the milk to the desired level. The heating element is contained, so you’re never in direct contact with it.

Inside of the reservoir, there are minimum and maximum lines to indicate how much milk to add (more on this below).

A clear, plastic lid with a rubber gasket fits snugly over the jug so that you can watch your milk foam without getting splashed. Although the outside of the jug is plastic, the reservoir that holds the milk is metal, and it appears to have a nonstick coating.

The instruction manual has many safety warnings about potential hazards due to the electronics in the product (e.g. don’t immerse in water) and heat-related hazards. Children under 8 should not use the frother unsupervised.

The owner’s manual advises you to use cow’s milk with 1.5% milkfat for best results. I’ve been using mine with almond milk, and it works very well. I’m sure it would work well with higher-fat milks or other non-dairy milks, despite the manual’s advice.

Setting up the Frother: 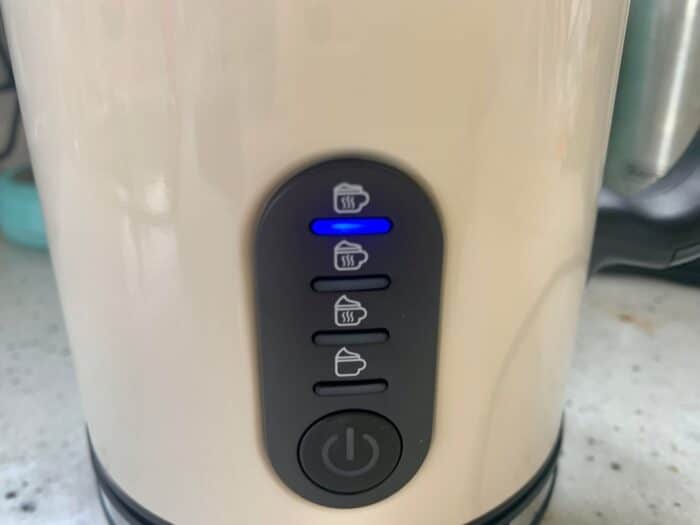 When I unboxed the frother, I was surprised to see that the instruction manual included in the box was for the Ambiano Retro Egg Cooker, not the milk frother. I emailed the customer support address for Wuensche (a common Aldi after-sales and warranty service provider) listed on the product insert and asked for a copy of the correct user’s manual.

Fifteen minutes later, they emailed me back with a pdf copy of the correct manual and an apology. I was impressed with how quickly they got back to me. I can’t help but wonder, though, if someone out there bought an egg cooker and got my instruction manual. If that’s you, just know that your manual made it to a good home.

I experimented with the machine while I waited for the manual. I put water in the reservoir and tried to figure out how the buttons work. It’s a simple system: you push the “on” button once, and it blinks. To change the settings, push the button again to move the light down the list of options. After a couple of seconds, the light changes from blinking to solid, indicating that you’ve made your selection, and the machine is starting.

The pictures on the buttons indicate different levels of foam. The first setting warms the milk and creates very little foam, the second creates a “medium” amount, and the third creates the most foam. The last setting creates a generous amount of cold foam.

While experimenting, I could see bubbles in the water while it was in motion, but of course, no foam, since foam requires solid particles to create a mass of stable bubbles.

There are two MAX lines inside the reservoir. This confused me until I read the manual, which explains that you can use more milk if you’re merely heating without frothing. That makes sense, since foam adds volume.

The temperature on all three warm settings is just right: nicely warm but not anywhere near boiling, so you don’t have to worry as much about scalding yourself as you do if you warm up milk in the microwave or on the stove. You should still use caution, of course, especially around children. 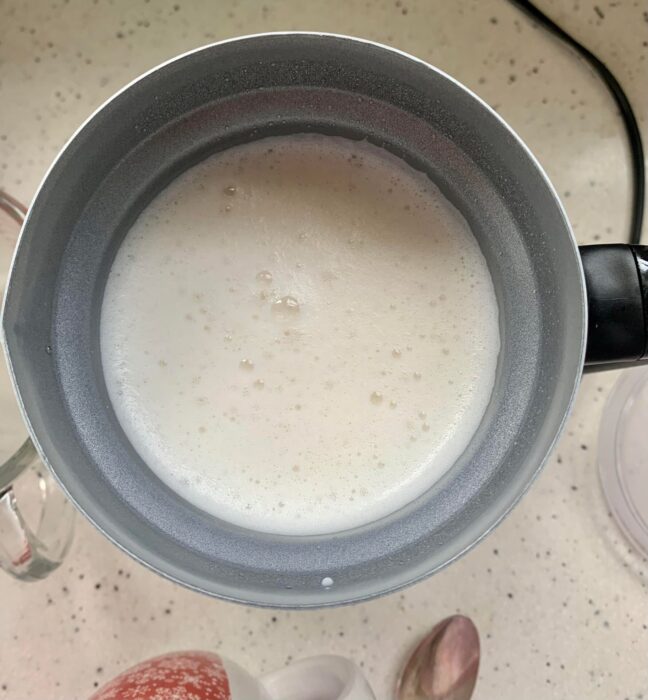 Frothed milk inside the reservoir.

The first setting does as promised and creates warm milk with a little foam. The second, “medium” setting creates quite a bit of foam. I always order my Cafe Misto with “extra foam,” but the “medium” setting creates at least double the amount of foam than I get from Starbucks. Just warming the minimum, which is about ⅓ of a cup of almond milk, created enough foam for my husband and I to split into two 12-ounce mugs for our coffee. 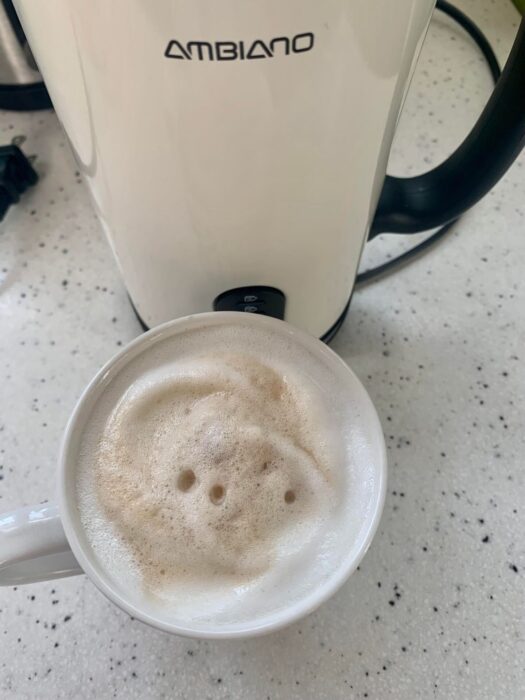 The third setting makes more foam than I actually want in my coffee. It would be perfect if you want to make a cappuccino, which traditionally is all foam and very little milk, on top of espresso. The cold foam makes cold foam, as promised, but I prefer my milk warm, so I don’t use that setting.

The milk only takes about 30 seconds to froth up, and the machine is very quiet. The blue indicator light turns off when it’s finished, but it doesn’t beep, so you need to keep an eye out to know it’s done.

Cleaning the machine is as easy as rinsing it out thoroughly and letting it dry between uses. The jug cannot be immersed, so don’t soak it or put it in the dishwasher.

I’m delighted with my milk frother and would recommend it to anyone who likes frothy milk in their coffee drinks or wants it for non-coffee drinks, like hot chocolate. It’s fast, easy to use, and economical vs. buying coffee from Starbucks. I’m not going to give up my coffee shop habit anytime soon, but it’s nice to know that I can create an excellent Cafe Misto at home for a fraction of the price.