Aldi offers brownie mix as a Regular Buy that is in stores all the time, but I was intrigued to see a Special Buy (ALDI Find) specialty brownie mix recently: the Baker’s Corner Ultimate Double Chocolate Brownies box mix. Aldi typically rotates name-brand Ghirardelli brownie mixes into the store when it offers specialty brownies, and I like to stock up on these. I decided to take a chance on the Baker’s Corner double chocolate brownie mix. There also was a walnut brownie mix option, but I didn’t purchase it. I was curious to see how Aldi’s brownies compared to Ghirardelli’s. 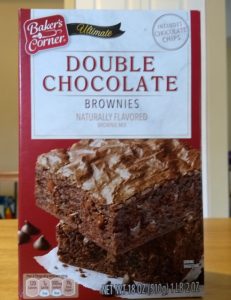 This 18-ounce box includes chocolate chips in the mix and serves 16 per container.

These mixed up easily and baked well (although I baked them about 5-10 minutes less than the instructions stated). The amount of chocolate chips in the batter was decent, with perhaps slightly fewer chocolate chips compared to a Ghirardelli box mix.

My family enjoyed the Aldi brownies. Other than being maybe a bit skimpy on the chocolate chips, these were just as good as Ghirardelli brownies. They were rich and chocolatey, and they disappeared in two or three days. They went especially well with some vanilla ice cream. (We went with Aldi’s Specially Selected Super Premium Vanilla Ice Cream, which has just five simple ingredients: skim milk, cream, sugar, egg yolks, and vanilla extract.)

Preheat the oven to 350 degrees. Spray the bottom of an 8×8 pan with nonstick spray. (A chart on the back of the box also includes baking instructions for less-thick brownies using 9×9 or 11×7 pans.) Whisk together oil, water, and egg in a large bowl until combined. Add mix and blend until moistened. Pour the mix into the pan and bake for 40-45 minutes or until brownies start to pull away from the pan. (Note: I baked my brownies for only 35 minutes. They were not underbaked at all. So keep an eye on your brownies while they bake.) Cool and cut into squares.

Aldi’s Special Buy (ALDI Find) Baker’s Corner Ultimate Double Chocolate Brownies are comparable to name brand Ghirardelli boxed brownie mixes. The Aldi brownie mix had perhaps slightly fewer chocolate chips in the batter compared to Ghirardelli, but they were otherwise rich and chocolatey, and they are especially good served with a few scoops of vanilla ice cream. My family ate the entire batch of brownies in a matter of days. I’ll be stocking up on this mix the next time I see it in stores. Recommended.