Apparently the theme for my summer (besides “let’s spend money on travel”) is “let’s eat frozen pocket sandwiches.” I recently reviewed the liveGfree line of pocket sandwiches, and now my attention has turned to breakfast.

I have a tall, gangly, almost-11 year old boy at home who is Always. Hungry. (I even bought him a t-shirt with an open shark mouth that says “Always Hungry,” and he thinks it’s hilarious.) He’s hungry when he wakes up. He’s hungry before he goes to bed. He’s hungry every hour on the hour, except when he’s asleep. He’s constantly rummaging through my well-stocked pantry and fridge and declaring, “There’s NOTHING TO EAT!” before promptly eating two or three snacks in a row.

Breakfast is a bit of a sticking point between us because he wants to start snacking at 7a.m., and I’m trying to convince him that he’d be less hungry (read: less cranky) between breakfast and lunch if he got a little protein in his belly before filling it with crackers. I wanted something quick and easy and filling that he could make for himself (since at 7 a.m. I’m still stumbling around in a pre-coffee haze) to break him of his early morning cracker habit. BUT he doesn’t like eggs, so that limits my options. 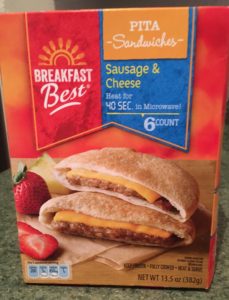 Each “sandwich” is really just half of a sandwich — half of a sausage patty plus half a piece of cheese wrapped in half of a small pita pocket. The packaging is a little deceptive that way: the cover art shows two half-sandwiches, stacked. It implies that they cut open a single sandwich to show you the layers of sausage and cheese. But the cover is actually showing you two separate sandwiches, not one sandwich cut in half. Suddenly your 6-pack of sandwiches becomes a 3-pack of whole sandwiches.

The half-sandwich size is great for me, because I’m not a rapidly growing preteen boy. But for him, it’s not enough food to stave off the hunger monster. Two sandwiches is just right to fill him up and keep him out of the pantry for a few hours. Maybe. 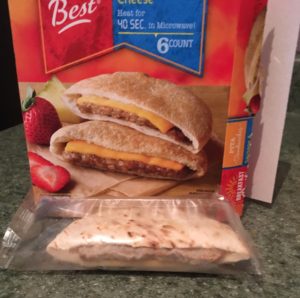 The instructions tell you to remove the pita from the plastic wrap, wrap it in a paper towel, and microwave on high for 40 seconds. Forty seconds seems just right for delivering a sandwich that is hot with melted cheese but not overcooked. The box also notes that “the sandwich is perfect when the cheese is just beginning to melt.”

There are no instructions for cooking in an oven / toaster oven or for microwaving more than one at a time. Fellow Aldi Reviewer writer Joshua found that when he cooked three of them at a time, he found that he had to microwave them for an additional 30 seconds (70 seconds total) before they were hot.

The sandwich tastes great! The sausage is similar to the Breakfast Best Maple Flavored Pork Sausage Patties … but without the maple flavor. The cheese is American-style, so it is mild and melts easily. The pita pocket is chewy but not too bready, which is good. You can really taste the sausage and cheese instead of just getting a mouthful of bread.

Joshua points out, though, that you pay for that taste nutritionally. Each 200 calorie pita has 15g of fat (23% of your daily allowance), 5g of saturated fat (25%), 30mg of cholesterol (10%), and 450mg of sodium (19%). This is not the ideal food if you’re on a low-fat / low-sodium diet, especially if you eat two of them, so be mindful of that if you’re thinking about getting these.

These sandwiches taste great, warm up very quickly, and are an easy breakfast or lunch for hungry kids (and adults). They get my recommendation. I do wish the picture on the box was clearer about what “one sandwich” actually is, but now that I know, I’ll just buy two boxes next time. And my son will thank me for it.