If you want a quick, easy, one-pot dinner that has a mix of carbs, veggies, and protein, Aldi’s got you covered with two different Regular Buy skillet dinner entrees: Bremer Alfredo Chicken and Bremer Garlic Chicken.

These pasta and chicken skillet dinners are sold in 21-oz. bags in the freezer section at Aldi, and they retailed for $3.29 each at the time of publication. Each bag contains three servings.

Both dinners are made with white meat chicken and contain 0 grams of trans fat per serving. They contain milk, wheat, and soy.

These skillet meals should be kept frozen until ready to prepare, and they heat up in about 10 minutes or less with little effort. The sauce for each meal is frozen in small cubes and mixed in with the noodles, veggies, and meat, and it thaws and mixes with the food as the meal cooks.

The packaging offers two preparation methods: skillet or microwave. The instructions for both meals say to heat the food to a minimum temperature of 160 degrees.

To prepare in a skillet (which is how I heated our dinners), pour the packaged contents into a skillet. Cover and cook over medium high heat for 8 to 10 minutes, stirring occasionally to blend ingredients. 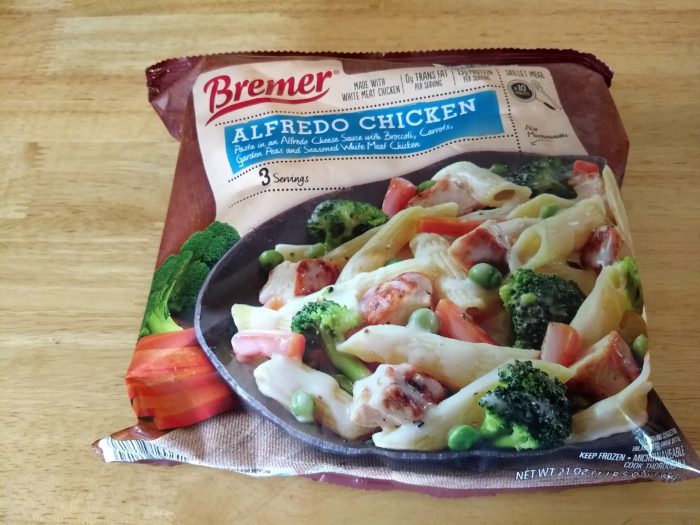 This skillet meal is described on the packaging as “Pasta in an Alfredo Cheese Sauce with Broccoli, Carrots, Garden Peas and Seasoned White Meat Chicken.” 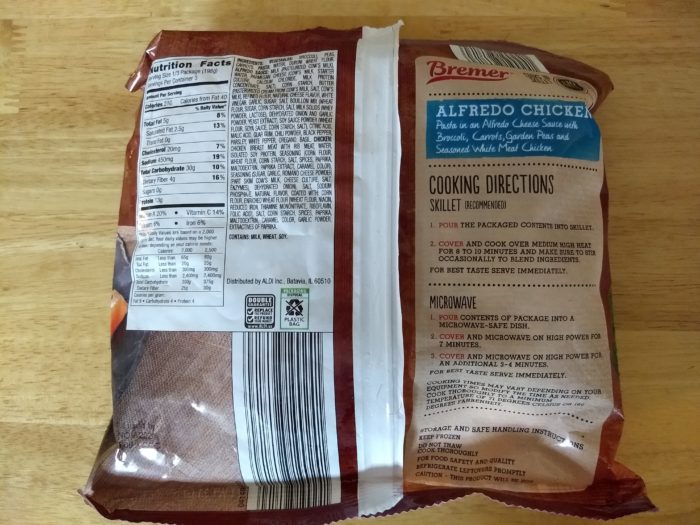 Nutrition info for the Alfredo Chicken. (Click to enlarge.)

This meal has penne pasta noodles, and while it’s got plenty of veggies, it still has enough pasta that you feel like you’re getting a satisfying carb fix. The amount of chicken in this meal isn’t too bad either, although it’s definitely there in a smaller proportion compared to the noodles and veggies.

My family liked the flavors in this Alfredo Chicken meal slightly better than the Garlic Chicken meal below, although both are good. The Alfredo Chicken had less sauce, or perhaps it soaked up the sauce more than its Garlic Chicken counterpart, but that was not a deal breaker. While it’s a good meal, my family noted that making an alfredo dinner using some of Aldi’s jarred alfredo sauces is better. 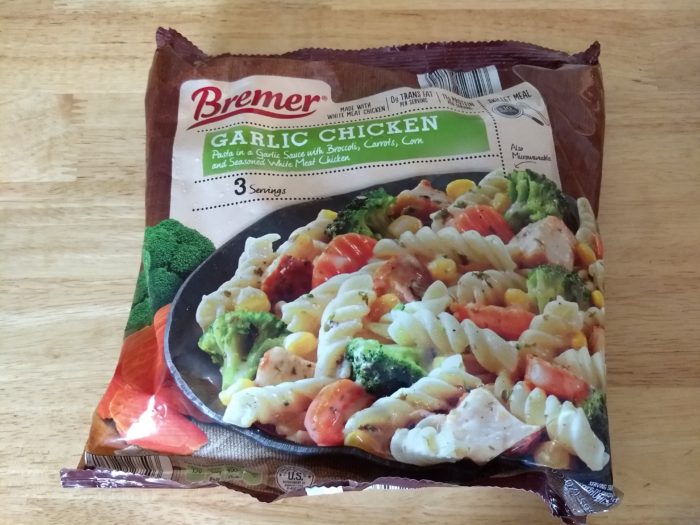 This skillet meal is described on the package as “Pasta in a Garlic Sauce with Broccoli, Carrots, Corn and Seasoned White Meat Chicken.” 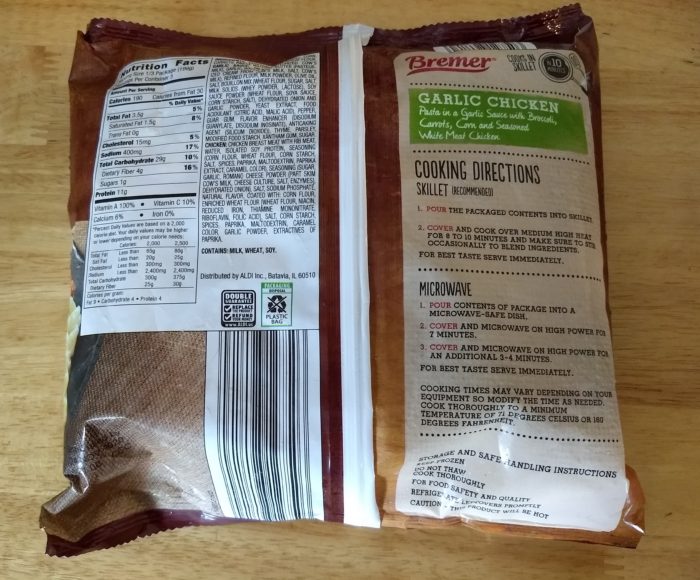 Nutrition info for the Garlic Chicken. (Click to enlarge.)

This meal uses rotini pasta, and it features a garlic sauce rather than alfredo sauce. This meal had more sauce overall compared to the Alfredo Chicken skillet meal. It tasted fine, but my family preferred the Alfredo Chicken slightly more over the Garlic Chicken. You can’t really go wrong with either meal, though.

Aldi’s Bremer Alfredo Chicken and Bremer Garlic Chicken skillet meals offer a decent serving of veggies, don’t skimp too much on the meat, and still offer you a carbohydrate fix. These dinners heat up in 10 minutes or less on the stove top or in the microwave; just dump into a skillet or dish and heat. My family prefers alfredo dishes made with jarred alfredo sauces over the frozen Bremer Alfredo Chicken, but it’s still a solid meal, and both entrees are good if you’re short on time or energy and can’t make something from scratch.