Aldi is a discount grocery store that has its origins in Germany. While most of the food you’ll find at Aldi is typical of what you’d find in many American grocery stores, Aldi occasionally rotates German food into its stock for a short time and sells it until supplies run out. German treats you may find at Aldi a couple of times a year include schnitzel, strudel, Jaffa cakes, German pickles, potato dishes, cream cakes, sweet mustard, whole grain mustard, and more.

Although most German food at Aldi is sold only for a limited time, there are a few German items Aldi appears to stock all year. That includes several types of canned soup, including Deutsche Küche Fall Harvest Vegetable Soup and Deutsche Küche Harvest Potato Soup. Aldi also sells a German pea soup, which I’m looking at today. 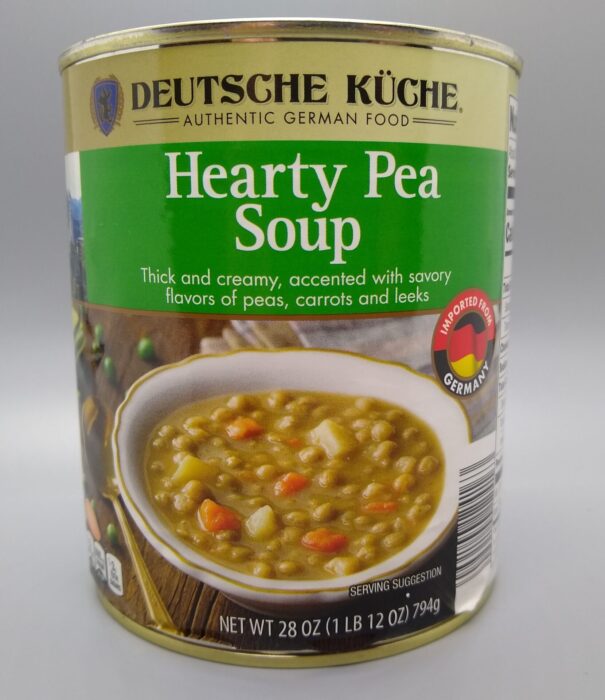 Deutsche Küche Hearty Pea Soup costs $2.09 for a 28-ounce can at the time of publication. It’s from Germany, and the label says it’s “thick and creamy, accented with savory flavors of peas, carrots and leeks.” 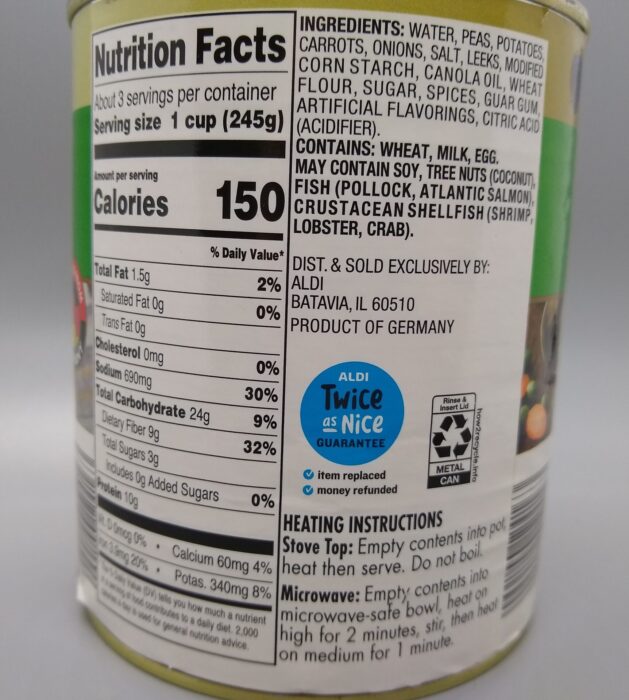 It can be heated on the stove top or in the microwave.

To heat on the stove, empty contents into a pot, heat, then serve. Do not boil the soup.

To microwave, empty the contents into a microwave-safe bowl. Heat on high for 2 minutes, stir, then heat on medium for 1 minute. 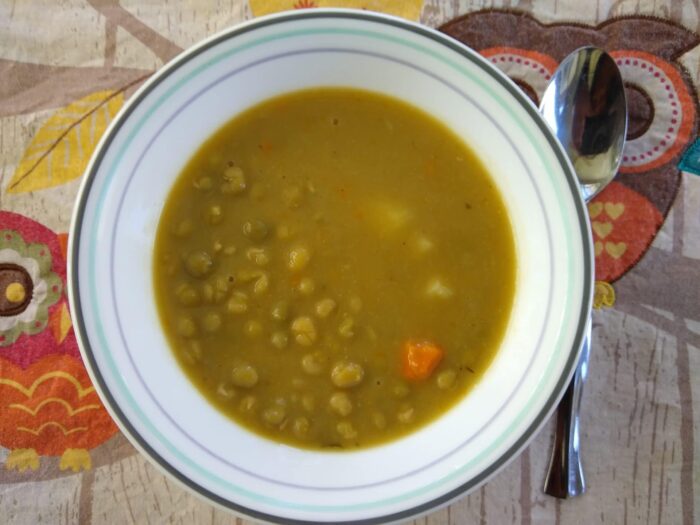 Deutsche Küche Hearty Pea Soup, ready to eat. It has plenty of peas.

This soup comes out of the can thick, but it thinned out some as it heated on my stove top. It has tons of soft peas, along with just a few pieces of potatoes and carrots. My family does not eat a lot of canned soups other than tomato soup and New England clam chowder, so none of the Deutsche Küche canned soups have really been standouts for us. This one is all right, and I like it about the same as the Deutsche Küche Harvest Potato Soup, and it’s better in my opinion than the Deutsche Küche Fall Harvest Vegetable Soup. If you like peas, you might like this soup. If you like the taste and/or convenience of canned soup, you might also like this soup. You can also try doctoring it up by adding diced cooked ham or bacon, or serve it with some buttered bread or toast.

Deutsche Küche Hearty Pea Soup does not skimp on the peas. It has plenty of soft, whole green peas in a thick and savory broth. It’s not our favorite canned soup, but it’s not the worst either. If you like canned soup, or if you’re making a point to try every single Deutsche Küche product that Aldi sells, then this may be for you.