Salisbury steak was a staple on the school cafeteria lunch menu when my husband and I were kids. The mystery meat-type dish was never a favorite of mine, but I felt some nostalgia when my family sat down to a dinner of Salisbury steak from Aldi recently. 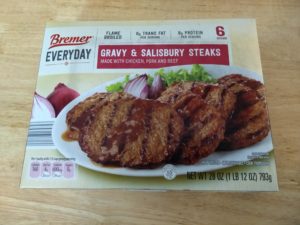 According to Miami Beef, it turns out that Salisbury steak has a history dating back to around the time of the American Civil War, when physician James Henry Salisbury became convinced that soldiers needed protein to stay healthy, and he determined that chopped beef formed into patties was easier to digest.

Nowadays, Salisbury steak can contain several kinds of meats, but it must have a minimum of 65% meat, and up to 25% of that can be pork, according to Miami Beef. Extenders or fillers can include bread crumbs, flour, or oat flakes, but they can’t exceed 12% of product volume. Soy proteins must be 6.8% or less of product volume. No wonder this meaty mashup meal seemed odd to me as a kid in the school cafeteria.

So, let’s take a look at Aldi’s version of Salisbury steak.

The Bremer Everyday Gravy & Salisbury Steaks sold for $2.19 for a 28-oz. package at the time of publication, and they are a Regular Buy item that can always be found in the freezer section at Aldi. One box contains 6 servings.

The package says the steaks are “flame broiled” and that they are made with chicken, pork, and beef. The ingredients list states it contains “mechanically separated chicken,” along with pork, beef, and soy protein concentrate. 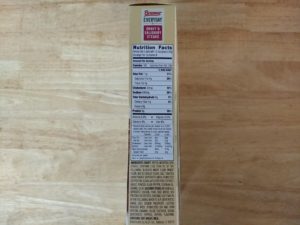 They contain soy, wheat, and milk.

The steaks should remain frozen until you’re ready to use them. You can prepare the steaks in the conventional oven (recommended) or the microwave.

To heat in the oven, heat the oven to 375 degrees. Remove the heat-safe tray from the carton and remove the film from the tray. (The film is a bit annoying to remove because it tears into multiple pieces, and it’s hard to remove it from the edges of the tray.) Place on a cooking sheet in the center of the oven. Cook for 45 to 50 minutes or until fully cooked. Carefully remove the cooking sheet from the oven with oven mitts and let stand for 2 minutes. Internal temperature should reach 165 degrees as measured by a food thermometer in several spots.

To heat in the microwave, remove the heat-safe tray from the carton. Place the tray on a microwave-safe plate. Peel one corner of the film to vent. Microwave on high power for 10 minutes. Carefully peel back the film and separate any portions still frozen. Spoon gravy over the patties. Replace the film and rotate the tray 1/2 turn. Microwave on high for 6 to 7 minutes or until fully cooked. Let stand for 2 minutes. Carefully remove the microwave-safe plate with oven mitts fro the microwave oven. Internal temperature should reach 165 degrees as measured by a food thermometer in several spots.

I opted to heat our Salisbury steaks in the oven, and they were up to the proper temperature after about 45 minutes. I made a pouch of instant mashed potatoes to serve alongside the steaks and to help mop up all the gravy.

My family and I actually enjoyed this meal. My kids asked for seconds. It brought back childhood memories for me, and it made for good comfort food. You can’t beat the price either; served alongside the packet of mashed potatoes (which I bought at Aldi for 69 cents), it cost less than $3 to feed four people, and we had some steak left over because the box has six servings. I would recommend spending a bit more and serving some veggies like steamed broccoli or a salad on the side as well.

Aldi’s Regular Buy Bremer Everyday Gravy & Salisbury Steaks is inexpensive comfort food. If you grew up eating lunch in school cafeterias, it may even evoke some nostalgia for your childhood. It’s processed and has a fair amount of sodium and fat, and it tastes like “mystery meat,” but it’s not a bad choice if you want an easy and very cheap dinner.