You can make a pretty mean breakfast using Aldi products, from their low-priced bacon and eggs to their decent selection of heat-and-serve items. For those who don’t want to make french toast on their own, Aldi’s got that. 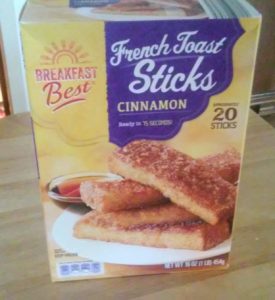 Breakfast Best French Toast Sticks come in two varieties: original and cinnamon. They cost the same and come packaged with the same number of sticks. The cinnamon version has a cinnamon-sugar coating, which gives them a slightly sweeter taste (as well as makes them a bit more messy). The cinnamon sticks also have a slightly higher sugar content than the original ones, though the difference is relatively small.

The original sticks can be cooked in the microwave, on the skillet, or in the oven, while the cinnamon sticks can be cooked in the microwave or oven. The microwave is the fastest, at no more than a minute. The skillet takes as long as it takes to cook all the sides, which varies but comes out to, in our experience, about five minutes or so. The oven takes six minutes — three on each side — plus the time to preheat the oven to 425 degrees.

Which approach you take is up to you. We’ve tried all three and we recommend the oven, especially if you have a little time and you like your french toast crisp. If you don’t mind them being on the floppy side or you’re rushed, the microwave instructions are pretty simple.

So, are they good? Oh, yes. The taste and texture are both excellent and they go well with syrup. But are they good for you? No. They’re fairly high in sodium, fat, and sugar, and they’re made with white flour. Aldi has tested some whole wheat varieties as a Special Buy, but they, too, also remain high in the other categories.

They won’t win any awards for nutrition, but the Breakfast Best French Toast Sticks taste great and are a cinch to make. You can throw them in the microwave in a hurry, but we suggest baking them, especially if you’re out to create a top-quality home breakfast experience.