Aldi does not lack for delicious seafood options, whether it’s popcorn shrimp, breaded shrimp, crab legs, crab cakes, or flavorful salmon. While most of the seafood at Aldi is sold under its private label, Fremont Fish Market, the grocery store does sell a few name-brand seafood products from time to time. This week in the specials freezer, I spotted some enticing stuffed shrimp sold under the Chicken of the Sea label, which is a name brand usually known for selling canned tuna and other canned fish. 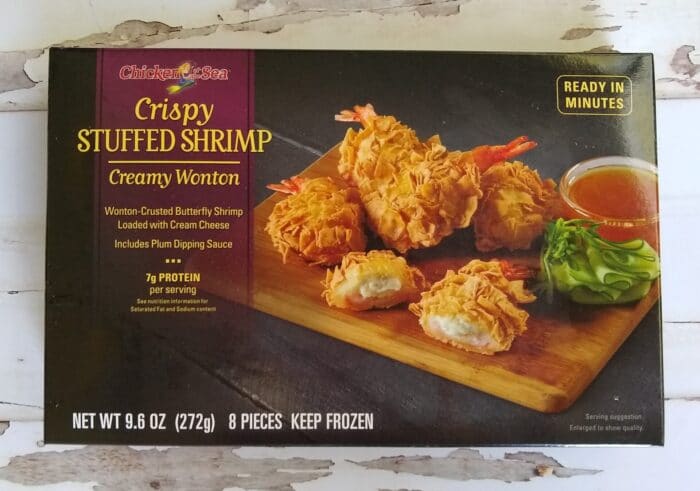 Chicken of the Sea Crispy Stuffed Shrimp cost $5.99 for a 9.6-ounce box with eight shrimp at the time of publication, which comes out to about 75 cents per shrimp. These were sold at Aldi in three flavors: Creamy Garlic and Spinach, Creamy Jalapeno, and Creamy Wonton. I bought the Creamy Wonton stuffed shrimp, which the package describes as “wonton-crusted butterfly shrimp loaded with cream cheese.” It comes with a packet of plum dipping sauce.

These are an Aldi Find, which means they’re only in stores for a short time. Because these are name-brand Chicken of the Sea, I thought I might be able to find these at other grocery stores such as Walmart, but so far I haven’t spotted them anywhere else. It’s possible they might be exclusive to Aldi, but I don’t know for sure.

The shrimp was farm raised in Thailand, and the package bears the seal for the SeaChange sustainability strategy for responsible sourcing through Chicken of the Sea’s parent company Thai Union.

If you’re looking out for allergens, this contains shrimp, milk, anchovy, soy, wheat, and coconut. 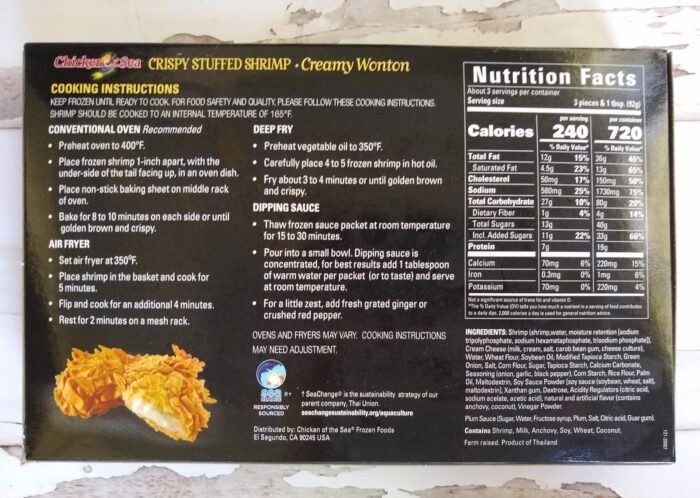 The shrimp can be prepared in a conventional oven, air fryer, or deep fryer.

To bake in an oven, preheat the oven to 400 degrees Fahrenheit. Place frozen shrimp one inch apart, with the under-side of the tail facing up, in an oven dish or on a nonstick baking sheet on the middle rack of the oven. Bake for 8-10 minutes on each side or until golden brown and crispy.

To air fry, set the air fryer to 350 degrees. Place shrimp in the basket and cook for 5 minutes. Flip and cook an additional 4 minutes. Rest for 2 minutes on a mesh rack.

To serve the dipping sauce, thaw the frozen sauce packet at room temperature for 15-30 minutes. Pour the sauce into a small bowl. The sauce is concentrated, so for best results add 1 tablespoon of warm water per packet (or to taste) and serve at room temperature. For a little zest, you can add fresh grated ginger or crushed red pepper. 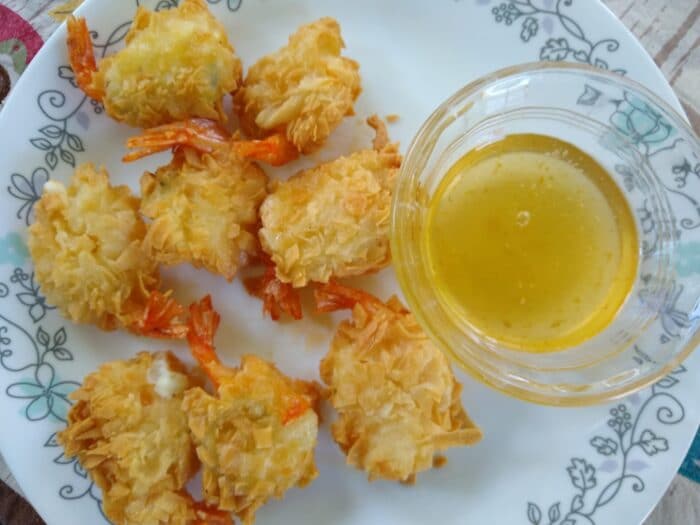 I heated these shrimp in my air fryer and they came out perfect. The wonton coating is crispy, and inside there is tender shrimp and flavorful cream cheese. The plum dipping sauce is mildly sweet and sticky, and the flavor combination works well with the shrimp and cream cheese. 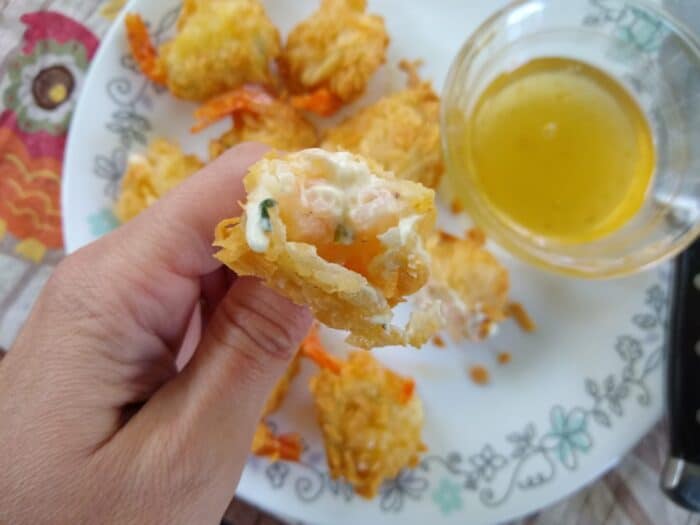 I split these with my husband for a light lunch, but one person could easily eat the entire box in one meal if they’re really hungry. It’s certainly tempting. If I spot these at Aldi again, I’d also be tempted to buy another box or two.

Chicken of the Sea Crispy Stuffed Shrimp come in three varieties: Creamy Garlic and Spinach, Creamy Jalapeno, and Creamy Wonton. We tried the Creamy Wonton stuffed shrimp, and they were excellent. The included dipping sauce is good, too. Recommended.