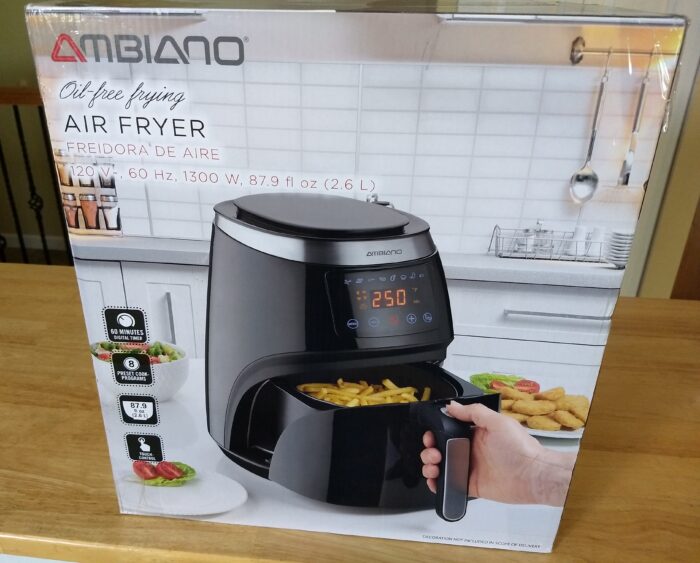 Just a day before I first started writing this piece, my family went out to eat with some friends at a local restaurant, and I ordered the fried chicken. It was so good that my kids — who don’t particularly care for fried chicken — poached all the fried chicken I couldn’t eat, with a little help from my wife. Deep frying things seals in the flavor and gives them an extra crispiness and taste that baking can’t duplicate, much less microwaving.

We know this, too. The problem is that deep frying food seals fatty oils into your foods, infusing them with things that make the food more likely to be a health problem.

An air fryer offers something of a potential solution. It promises to give food the taste and texture you get with a deep fryer without the added oil.

Sometime in the fall months, Aldi sells one. 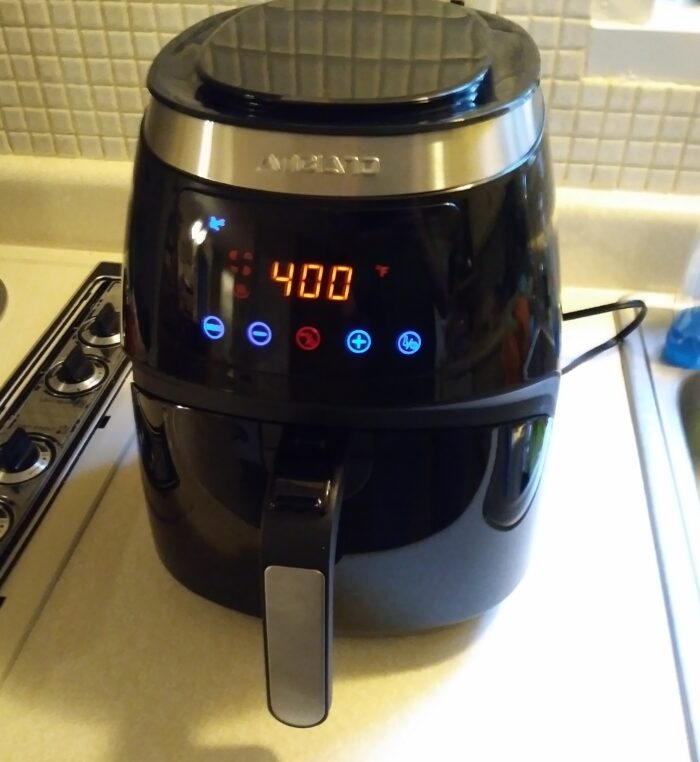 The Ambiano Air Fryer (product code 98655) is an ALDI Find, meaning it’s only in stores for a limited time. Once it’s gone, it’s gone. The air fryer runs $49.99, which is cheaper than just about all of the air fryers we’ve seen online.

The fryer comes with the following:

The air fryer’s features include:

The fryer is backed by a 3-year warranty, serviced by Wuensche USA.

Setting it up isn’t hard, although you’ll want to read the manual carefully before getting down to business. The most important things to do are 1) make sure all the packaging is removed and 2) wipe down the inside and outside of the fryer with a “slightly damp” or “moist” cloth. The manual advises special care when wiping down the fan and heating element at the top of the inside of the air fryer.

From there, it’s a matter of plugging it in and getting to work.

As the feature set suggests, the air fryer uses a touch screen menu, which I found to be simple and responsive. A menu button lets you cycle through a list of presets, while other buttons let you configure the time and temperature if you want a more manual approach. While it’s not the most important thing, the air fryer does have a nice clean look to it, including the display.

Differences from a Deep Fryer 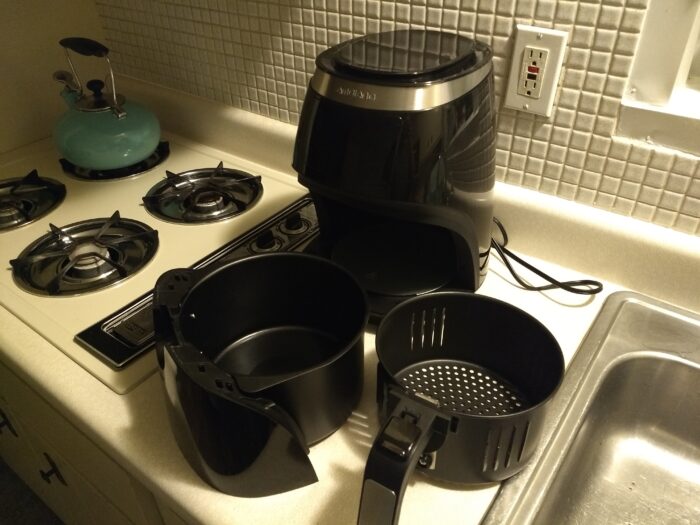 Now, if you’re familiar with a traditional deep fryer, one of the first things you’ll notice about an air fryer is that the space is configured differently. Where a deep fryer is mostly the basin, heated by an element, an air fryer uses a heating plate and a fan, and the fan in particular takes up a lot of space. The downside is that, for all the space an air fryer takes on a counter, it translates to a smaller fry basket than you’d get from a regular deep fryer of similar size. It’s not too small, though — based on my testing, the basket ends up being a little bigger than it looks, and it should be enough for most families to make decent quantities of food.

Another difference: cook time. Most prepackaged products that can be deep fried do come with deep fryer instructions, but few come with air fryer instructions. The manual offers a number of suggested cooking times, temperatures, and tips for various foods — and there are a wealth of resources out there to help people make the conversion — but for prepackaged foods there is necessarily going to be a bit of guesswork. One important point is that air fryers are closer to ovens in terms of temperature, since they both use air (the liquid of a deep fryer cooks faster at a lower temperature), although an air fryer will often be faster and may use a slightly lower temperature than an oven.

We tested a couple of different items in the air fryer. For my initial test, I fried up some Aldi curly fries, the ALDI Find cousin to Aldi seasoned fries. I went ahead and just used the preset for french fries, which called for 400 degrees over 18 minutes. Following the tip in the manual, I pulled out the insert and fry basket about halfway through, shaking the fries a little, before putting them back in. The handle was cool to the touch, and the fryer stopped almost immediately when I removed the insert. When I put the insert back in, it picked up where it left off. Once the time expired, it beeped and shut down.

The fries came out really well. They were crisp and tasty, with a texture a lot closer to a deep fryer than an oven. At the same time, they weren’t oily the way fries from a deep fryer are; I didn’t have to put them on a paper towel to blot the oil off of them, for example.

I also tested some of Aldi’s excellent hash brown patties. I used the same temperature as the french fries for the hash browns, pulling them out a few minutes earlier than the 18-minute default time. They came out perfectly crisp and tasty, just as the fries did.

UPDATE #1 (November 2019): Since we first published this review, we’ve tested a number of things in the air fryer — chicken drumsticks, diced raw potatoes, vegetable samosas, mozzarella cheese sticks, and bacon, just to name a few — and they’ve all come out really well. There remains a bit of an art to the cook times and temperatures, but the end result is undeniable: the air fryer produces crisp, tasty food. We expect this to be a keeper in our kitchen for a long time.

UPDATE #2 (September 2020): We’ve now owned this air fryer for close to a year, and it’s become one of our favorite go-to cooking appliances. There’s still an art to it with some foods, but things we cook in it are crispy and hot. We use it for a lot of things: French fries, onion rings, diced potatoes, hash brown patties, chicken patties, and samosas, just to name a few. We’ll sometimes toss in our buns to toast them for a minute, and we also like using it to reheat takeout food like crab rangoon or egg rolls that might get soggy in the microwave. In short, we’re glad we have it.

If you’re in the market for something that can deep fry without all the oil, this is an awfully interesting option. It’s easy to use, responsive, and makes a decent amount of food, all things considered. The Aldi fryer is also a fair bit cheaper than most other air fryers out there, so as models go this one definitely has that going for it. We don’t know about longevity yet, but a 3-year warranty definitely adds some peace of mind.