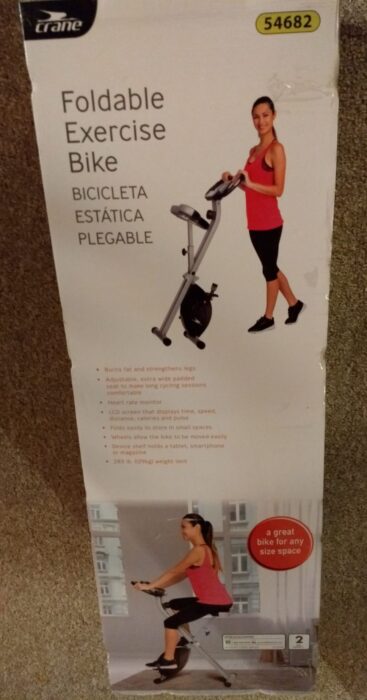 Ask any fitness buff what the worst time is to go to the gym, and they’ll tell you: January. Like clockwork, seemingly the entire United States (if not the first world) rushes out to local gym to follow through on those New Year’s resolutions. The crowds can continue through March (and some gyms actually have a March bump that’s bigger than January), which can make finding a treadmill or weight machine about as easy as changing lanes during rush hour.

Alternatively, people looking to add some activity to their post-holiday life can invest in the components of a home gym, although the cost of equipment (to say nothing of finding a spot for it in your house) can really start to add up … especially if you’re not totally sure you’ve got the persistence to keep using the stuff.

In moments like these, you might wonder if a certain German grocer — one who seems to know exactly what to rotate into its limited inventory section at just the right time — might have some solutions.

The answer is: yes, in fact, it does.

The Crane Foldable Exercise Bike is an ALDI Find (Special Buy), which means it will be in stores for a limited time and then it will be gone. In the year we purchased it, the bike cost $89.99. In our experience, this is significantly cheaper than most other foldable exercise bikes on the market. Here’s what comes in the box:

We’re not sure who manufactures the bike, but the warranty is serviced through an email with the domain name 801service.net, which we’ve seen with other Aldi products in the past. The warranty on the product is good for two years.

Features for the bike include:

Putting the bike together isn’t too hard, although there are a couple of small things you can do to make the process a little easier, which I’ll talk about in a moment. It took us about 40-45 minutes to put the whole thing together, from the time we started sorting parts to the time we had to unscrew one part at the end and move it (more on this in a moment). The instructions include both step-by-step procedures as well as a schematic later on that shows all the parts; we found it helpful to sort all the parts out before starting.

The box comes with a wrench and hex key (Allen wrench), which are the only tools you need to assemble the bike, although you can use your own tools if you want (and a ratchet and ratcheting screwdriver are helpful if you have them). The step-by-step instructions are pretty clear, but it does pay to make sure you have the right bolts, screws, or washers for each step, since there are a couple of variations of each in the packaging. For example, there are a few types of washers that need to go in a specific order.

A couple of other tips. One, there are a couple of steps that benefit from having two people, including attaching the feet and plugging the LCD display to the wire that goes down to the wheel. Two, be especially careful of where you place the two feet; one of them has wheels that won’t do their job properly if they’re not at the right location and angle. (We put them on wrong and had to unscrew and reposition them after we’d finished assembling the rest of the bike.) 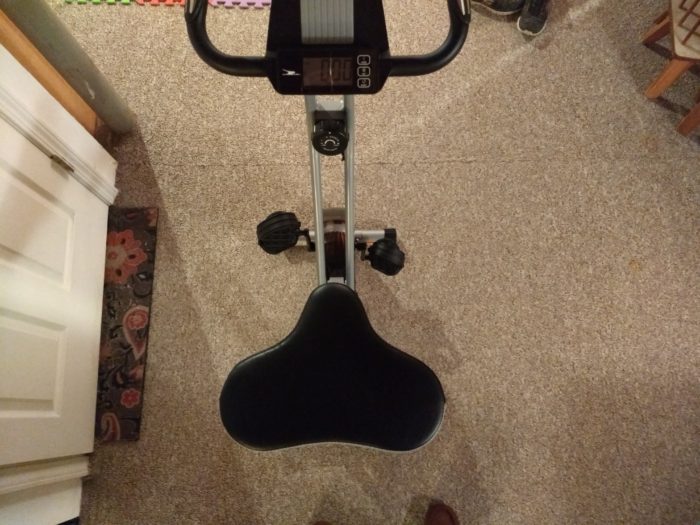 The bike is pretty easy to use. To unfold the bike, you simply remove a pin, unfold the bike, then put the pin back in. The seat can be raised or lowered with a club knob, the foot straps can be adjusted, and the bike’s resistance can be changed with an easy-to-reach tension knob below the LCD display.

We found that we needed to move the foot straps to their loosest setting to accommodate our shoes. (Shoes are “required” for using the machine, according to the manual.) The straps mostly slide into the front quarter of the shoe, so longer feet won’t necessarily be an issue, but people with especially wide feet might have trouble getting their feet in these. 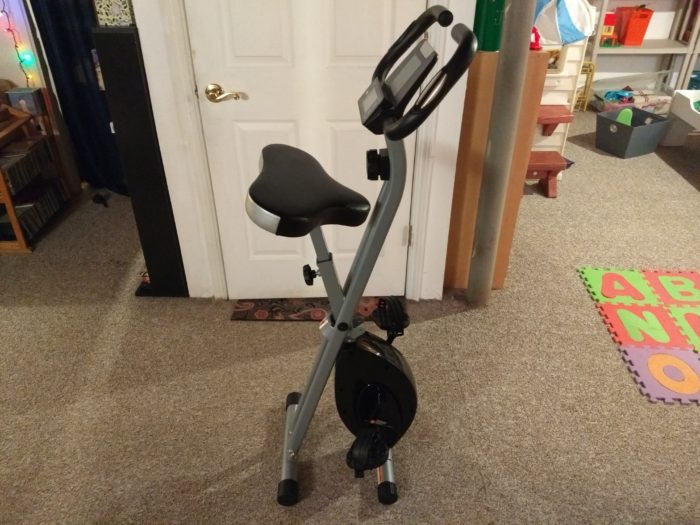 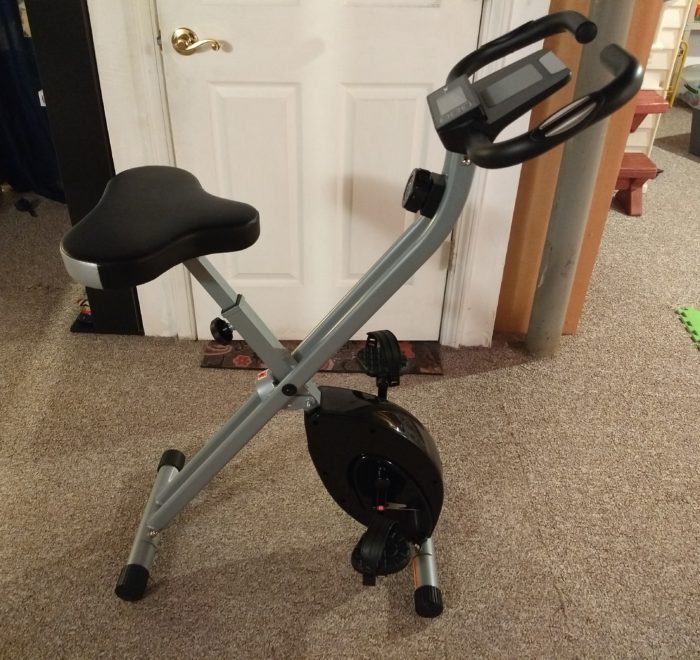 The LCD screen deserves special attention, since it’s a significant part of the bike. The screen is operated by two AAA batteries, which we found taped to some of the Styrofoam packaging. The LCD screen turns on when you start pedaling, and it will stay on until the bike is idle for four minutes. 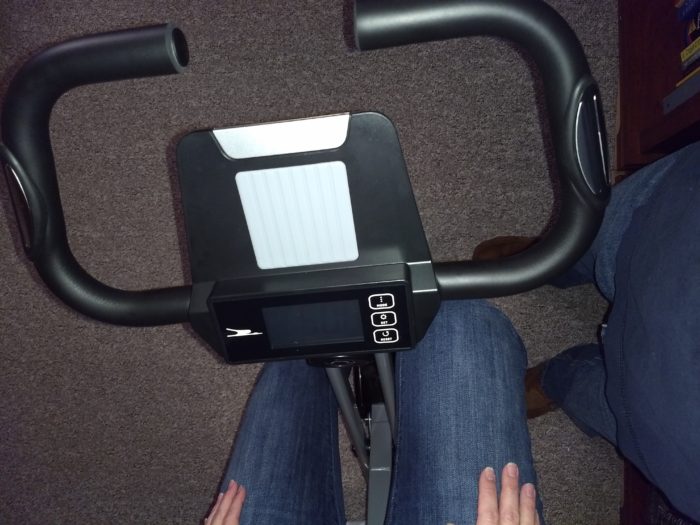 There are three buttons on the display: mode, set, and reset. Using the mode button, you can cycle between the data points above, or use a mode called scan, which automatically cycles through the data points once every six seconds.

According to the manual, the set button lets you set the value of time, distance, calories, and pulse. As best as we can tell, these let you set benchmarks for each. For example, you can use the set button to set a countdown timer rather than a stopwatch-type count-up timer. We didn’t hear any beeping or anything when benchmarks were reached, so we’re not totally sure how valuable those are. Also, we were hopeful that the set button might let users toggle between miles and kilometers, but that does not appear to be the case, and as far as we can tell whatever comes preset on the bike — miles in our case — is what you get. (If anyone has any insights on this, let us know in the comments.)

The third button, the reset button, can be used to reset the data for your given workout if you want to start over right away. (Alternatively, the values all seem to reset on their own after a minute or two.)

In testing out the LCD screen, we noticed a couple of hiccups. One, it’s a non-backlit screen, which can make it difficult to see in low light. Two, the software can be occasionally buggy. For example, we found that if we accelerated really hard or decelerated really hard (i.e. interval training) while holding the pulse handles, the time on the display would sometimes reset. We also found that, once we started pedaling, we couldn’t display just the time by itself — we had to display the time as part of the rotating scan feature. Display issues can happen with budget exercise bikes, but, just the same, be aware that there may be some here.

As for the rest of the bike? In our tests, we found it generally comfortable to ride, with a solid base on the ground to keep things stable and a smooth pedaling experience. The different tension settings provide a variety of options for making the workout more or less difficult, and they can be adjusted with little difficulty mid-workout. Thanks to the adjustable positioning of the seat, it feels relatively comfortable while using.

Oh, and when you’re done, the bike easily folds back up and wheels to wherever you need to put it.

One unknown at this point: durability. We don’t know how long this bike will last. We’ll update this review over time to reflect what we learn, although the two-year warranty does add some peace of mind.

UPDATE (February 2020): After one year, our bike has held up well. It sees moderate use in our house and works well for us. We’ve put nearly 900 miles on it (according to the odometer), and it pedals as smoothly as the day we got it, and the seat remains pretty comfortable.

We did experience a slight hiccup, though. In January of 2020, a family member was riding the bike and got off of it for a minute or two mid-workout, and when they returned to pick their workout back up, the display screen had reset, losing the stats for that individual workout (minutes, miles pedaled, and calories burned). More disappointing was the fact that the odometer for the total life of the bike also was reset to zero miles. We had been nearing 1,000 miles and were bummed to see the evidence of all our labor deleted. We thought low batteries might be the cause, so we swapped them out. We never did regain the original odometer readings but instead have restarted from scratch, which is something we’ll just have to live with and accept as part of the package with a cheaper bike.

UPDATE (February 2021): Two years after purchase, the bike continues to hold up under near-daily use, operating about the same as it did when we first bought it.

For $90, Aldi serves up a pretty nifty little weapon in the exercise arsenal. It’s relatively easy to assemble, easy to use, and feels both smooth and stable when in motion. It’s a lot less than comparably priced foldable stationary bikes, which is a real plus, and it comes with a two-year warranty.

There are, though, some limitations. The LCD screen, while filled with useful data, has some drawbacks, including the fact that it’s hard to read in low light and the fact that, in some instances, it can be glitchy. In addition, the foot straps may not be ideal with people for especially large feet.

Still, the price alone makes this worth a look, especially if you’re not sure you’ll use it enough to justify paying more. We’ll be keeping a close eye on it as we put more mileage on ours; in the meantime, we’re always interested to hear about other users’ experience in the comments.