I generally only like name-brand Bush’s baked beans. I wrote about this preference a few months ago when I talked about what I don’t buy at Aldi. In my previous experiences, anything that wasn’t Bush’s just tasted off. However, on a friend’s recommendation, I tried some of Aldi’s specialty Grill Style beans, and I was pleasantly surprised. 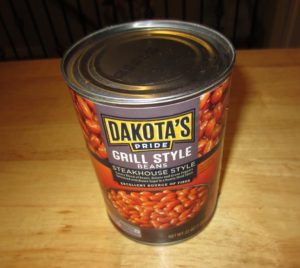 Dakota’s Pride supplies most of Aldi’s bean offerings, including chili, kidney, black, great northern, pinto, and baked beans. In addition, Dakota’s Pride offers some more upscale Grill Style beans that come in a few varieties, most notably Steakhouse Style and Southern BBQ. These are a Seasonal Favorite, which means they’re in stores for longer than an Aldi Find, but they aren’t available all year. Generally, you can find Grill Style beans at Aldi during the summer cookout months.

I tried the Steakhouse Style beans. These are a “savory blend of beans, onions and green peppers simmered with brown sugar in a hearty steak sauce.”

The Steakhouse Style beans come in a 22-ounce can and serve approximately five people, with 180 calories, 0 grams fat, 500mg sodium, 7 grams of protein, and 18 grams of sugar per serving. They do have a lot of sugar, but that’s to be expected with any baked beans in sauce. They are advertised as an excellent source of fiber. The ingredients list is: prepared white beans, water, brown sugar, less than 2% of onions, green peppers, salt, tomato paste, cornstarch modified, mustard bran, caramel color, apple cider vinegar, onion powder, natural molasses flavor, spice, vinegar, garlic powder, and natural smoke flavor.

The beans have instructions for heating in a microwave-safe dish or on the stove top.

My family liked these beans a lot, which is saying something when we are all a bunch of Bush’s brand snobs. These aren’t the same as Bush’s original baked bean formula, which is what we usually eat. The Dakota’s Pride Grill Style Beans – Steakhouse Style have a slightly different flavor and noticeable bits of green pepper (but not too much, for those of you who are picky about green things in your food).

My family usually only likes name-brand Bush’s baked beans, but we tried Aldi’s Dakota’s Pride Grill Style Beans – Steakhouse Style after a friend recommended them. They aren’t exactly the same as Bush’s original baked beans, but we liked them well enough that we’ve been won over. These are a Seasonal Favorite item, which means they aren’t sold year-round, so I’ll be stocking up whenever these beans make an appearance on Aldi’s shelves, which is usually during the summer barbecue season.