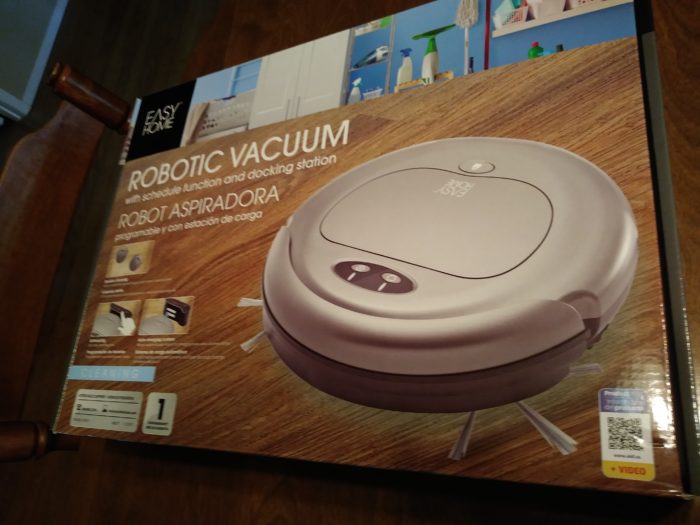 Also, six months after we purchased the vacuum, it stopped working. We documented our warranty process here.

Among the many Special Buys (ALDI Finds) that Aldi sells, some of them stand out enough to rise above mere curiosity … especially when technology is involved. We know, because reviews for those products see pretty big spikes on our site: the Sempre Digital Weather Station, the Crane Wireless Activity Tracker, and even the occasional Aldi computer.

We also regularly get asked about Aldi’s robot vacuums. Over the last few years, Aldi US has sold a few different models, including a pretty cheap $19.99 model and a somewhat more expensive $69.66 model.

The 2017 model, which is the focus of this review, is more expensive than any of those, retailing for $99.99. That’s still a fraction of the cost of, say, a Roomba, but a $100 product is one of the more expensive items you’ll see at Aldi, and consumers expect (reasonably, we think) a $100 device to at least be competent.

In other words, you realize you’re not getting a top-of-the-line vacuum, but you don’t want to throw your money away, either.

The Easy Home Robotic Vacuum is manufactured by KOBOT. In fact, the Easy Home model appears to be a rebranded KOBOT Slim Series Robot Vacuum, which is sold at several retailers, including Walmart, Target, and Home Depot; at the time of this post, prices ranged from $150-$200, significantly more than the Aldi version. What’s more, while some KOBOT vacuums are pretty mixed in their reviews, the Slim Series currently holds good marks on retailer sites, which is also a positive sign.

Features for the Aldi vacuum include:

The test, of course, is how it performs in real life. So we turned it loose around the house to see how it interacted with our various obstacles.

We advise looking carefully over the manual before using it, and referring back to the manual from time to time, especially in the early going. At one point, for example, it kept shutting off, and we realized after consulting the manual that it was because so much hair had gotten caught up in the center brush during cleaning. (Three females with a lot of long hair live in our house.) All that hair meant the vacuum was doing its job, but it also means we have to give regard to regular maintenance. 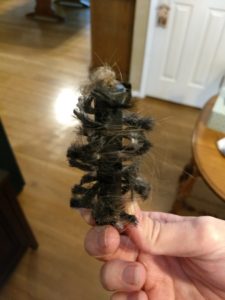 The center brush. Notice the hair, especially around the end — that can cause it to jam up if you don’t clean it regularly. (Click to enlarge.)

We tested the vacuum on hardwood, large rugs, vinyl flooring, and low-pile carpet. Overall, the vacuum does a pretty good job of making its way around a room regardless of the floor type. The programming is such that even when it appears to be “trapped” in a narrow space, it’s pretty good at eventually figuring it out given enough time. The fall prevention sensors also do their job; we have a stoop by our kitchen that the vacuum avoided falling down, even after repeated trips to the edge. It also handles small inclines well; we have a lift of perhaps a quarter of an inch between our kitchen and dining room, and it handled it without a hitch.

Another positive is cleaning the dustbin. The storage for dirt is a simple plastic receptacle inside the vacuum that can be removed at the touch of a button. Better still, it can be cleaned with soap and water … although the manual warns not to clean the filter with soap and water. The manual does point out that the dustbin should be cleaned after each use; it’s not that large and you’ll be surprised how quickly it fills, which is either a testament to its efficiency or the amount of dirt a house can collect. 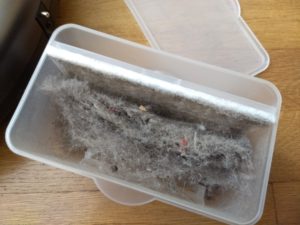 The dustbin after about 40 minutes of use. (Click to enlarge.)

One more feature that deserves a little attention is the charging base. The vacuum can be charged in two ways, either through the charging base or by plugging the plug adapter directly into a port on the back of the vacuum. Either works, although using the base opens up a couple of features that plugging it in directly does not.

One of the base’s biggest features is the scheduling. The base has a clock as well as the ability to set a daily time when the vacuum goes out and does its work. (If you have it set to two cycles, it will clean, return to the base, then go back out again to clean a second time.) The vacuum seeks out the base when the power is low; we watched as it worked its way back around the room and, when it passed in front of the base, turn, back into the charger, and shut off.

There is a learning curve to figuring out what the vacuum can’t do, and that means that, especially early on, it’s not as set-it-and-forget-it as you might expect it to be. To be fair, this is true of a lot of other robotic vacuums, but also understand that if you just expect this to take over cleaning duties without any work on your part, you’re going to be disappointed.

For one, obstacles on the floor can be a problem. Toys, electrical wires, and other non-furniture items can be an issue, and the manual advises getting these things out of the way before letting the vacuum do its job. This may require some creative placement of barriers depending on the layout of your home. You’ll likely get a feel for this the first few times you run it.

Another problem we found was low-clearance furniture. In a handful of instances, it got stuck: under a couch, under a bookshelf, and once when hitting the refrigerator at an odd angle. In those cases, it shut off and the display light went red … but not before the vacuum had picked up a couple of scuff marks for the trouble. In subsequent tries, we rolled up old towels to plug those gaps, which solved the problem, but that’s also an additional step you have to take to get the device to do its job.

In fact, the hassles were enough that, during early testing, we were unable to get the vacuum through more than, say, 15 minutes of use before it got stuck, trapped, or otherwise forced to shut down. As we said earlier, to be fair, some of these issues are not specific to the Aldi vacuum — they can apply to other, more expensive models, too — but the average Aldi budget shopper may not be familiar with robot vacuums, so it’s important to know what you’re getting. The upside is that, as we got better at orienting chairs and things during cleaning, it got stuck less often: we’ve gotten it to run 50-60 minutes without getting stuck, and even then all it needed was a small nudge instead of a full restart.

It’s also important to know that this doesn’t have the same suction power as a regular vacuum. It left behind some bits of lint and fuzzballs that were stuck on our living room rug that our traditional Eureka vacuum would easily pick up. It still picks up a lot, but it’s best to think of it as a supplemental vacuum rather than a replacement for a true deep cleaning. 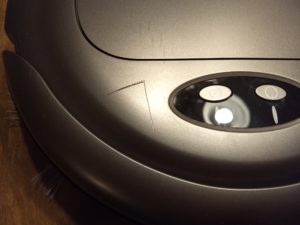 One other issue refers to the aforementioned base: namely, that it’s light. This wouldn’t seem like a problem, but it is, because if the vacuum hits it during cleaning it can jostle the base out of position, even pushing it down the wall it’s set along. We don’t really want to try and stick it to the floor with adhesive, for obvious reasons.

There are some things we still don’t know about the vacuum at this point. We don’t know how it will hold up mechanically over time. We also don’t know how battery life will fare under repeated use. The vacuum does come with a 1-year warranty, but we don’t know what we’ll get from this device 2-4 years out. We’ll keep you posted. 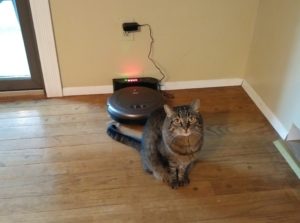 The vacuum in its dock. Plus a cat, because apparently cats and robotic vacuums are a thing. (Click to enlarge.)

The Easy Home Robotic Vacuum is, on the whole, a decent piece of technology. Despite the larger-than-typical-for-Aldi cost, you seem to get what you pay for, with a vacuum that does the job pretty well. It cleans well, navigates well, and — let’s be honest — it’s kind of a fun gadget to watch.

So the $100 question: do you need one? Well, be aware that, like most robot vacuums, it’s not something you can leave unattended, especially at the beginning. For those in the market for one of these gadgets, though, the low price and solid featureset makes this one worth a look.