EDITOR’S NOTE: We originally thought this product was a year-round Regular Buy when it first showed up at Aldi, but then it disappeared during the summer months and returned in the fall. We think this might be a seasonal item that Aldi sells for a few months each year, but it isn’t available all year. This seems to be a fall/winter product.

While browsing among the shrimp, fish stick, and salmon options in the Aldi freezer aisle recently, I noticed a meal kit I don’t think I’ve ever spotted before at Aldi. It was a fish and chips meal for one. Curious, I dropped one in my cart to try.

Fish and chips are a classic British meal of fried or breaded fish and French fries — which the British call chips. It’s a meal pairing that dates as far back as the 1860s. It’s a popular meal in the United Kingdom, and it’s one that my husband and I enjoyed during our travels there several years ago. 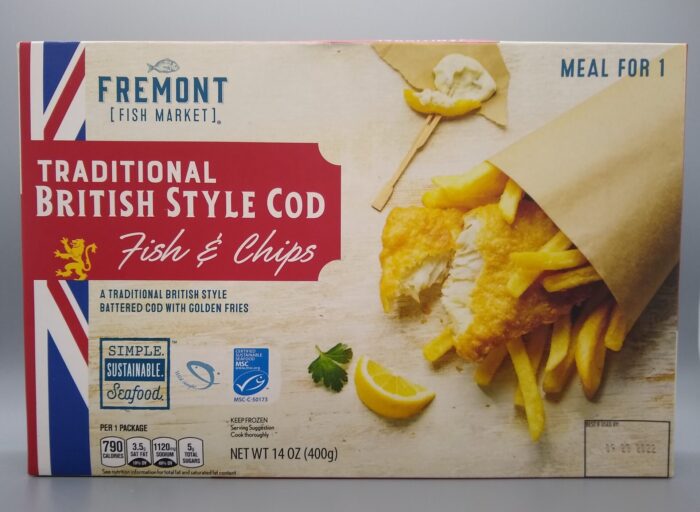 Fremont Fish Market Traditional British Style Cod Fish & Chips cost $5.49 for a 14-ounce box at the time of publication. The box describes it as “a traditional British style battered cod with golden fries.” It’s nice to note that this is an authentic product of the United Kingdom. This was sold in a mixed case in the freezer alongside some Scottish Beer Battered Haddock Fish & Chips, which are also a product of the U.K. and are also $5.49 for 14 ounces. I have not yet tried the Scottish Beer Battered Haddock. This post focuses on the British Style Cod Fish & Chips.

I originally thought this was a Regular Buy that Aldi sold all year. However, it disappeared during the summer months and then returned in the fall, so I now believe this is a seasonal item that is sold during the fall and winter months. Seasonal items at Aldi are available for longer than an Aldi Find, but they aren’t sold all year.

The meal bears the Marine Stewardship Council sustainability seal. The package states “the cod in this product comes from a fishery that has been independently certified to the MSC’s standard for a well-managed and sustainable fishery.” The cod was wild caught in Major Fishing Area 27 in the Northeast Atlantic Ocean, an area that includes the Barents Sea and Norwegian Sea. The catch method was trawls, seines, hooks, and lines. 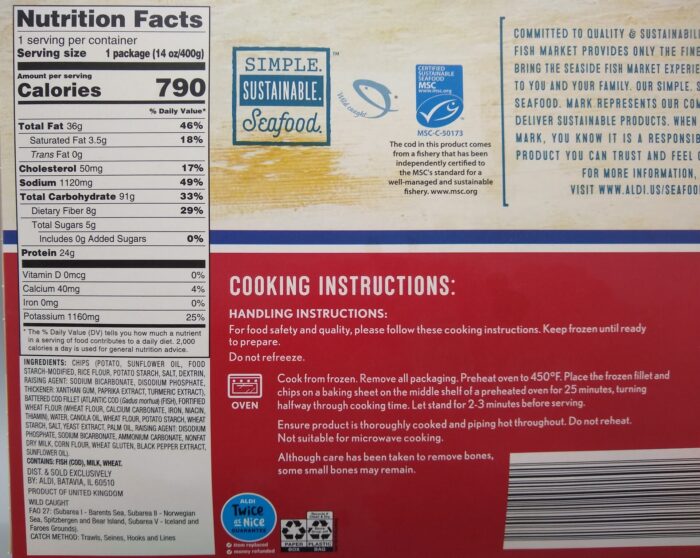 If you’re watching out for allergens, this fish and chips dinner contains fish (cod), milk, and wheat.

The package has directions for baking this in a conventional oven, and it states this is not suitable for microwave cooking. This is baked from frozen. Start by removing all packaging. Preheat the oven to 450 degrees Fahrenheit. Place the frozen fillet and chips on a baking sheet on the middle shelf of the preheated oven and bake for 25 minutes, turning halfway through cooking time. Let the fish and chips stand for 2-3 minutes before serving.

The package also notes that although care has been taken to remove bones, some small bones may remain. 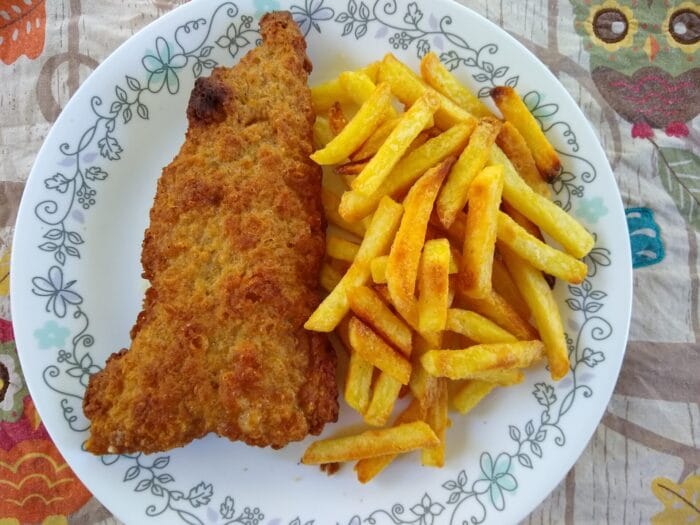 Aldi fish and chips after baking.

When you open the package, the fries are packed in a clear plastic bag, while the fish is loose inside the box. This meal baked easily in my oven and turned out quite crisp. 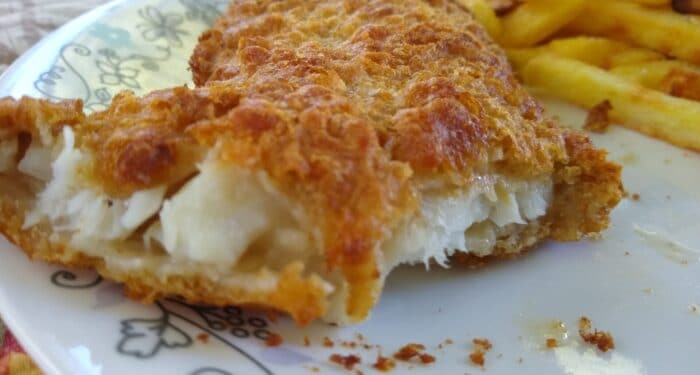 Cod fish after baking, with a good ratio of fish to crispy batter.

This was delicious, and the fish is a huge portion size. The cod fish has plenty of meat, along with lots of crispy, melt-in-your-mouth batter. The fries are thick-cut and, again, they come out of the oven very crispy. This meal for one is so large — with so many calories — that it really could be shared by two people. Unless you’re really hungry, it might be hard to finish this alone in one sitting.

Fremont Fish Market Traditional British Style Cod Fish & Chips features a giant crispy battered fish fillet and a generous helping of thick-cut French fries. This meal serves one, but portions are large, so you can decide if you want to share. If you like British food, we highly recommend this.