They look like ice cream sandwiches, but they’re not. The Friendly Farms Chocolate Snack Bars showed up among Aldi’s Special Buys (ALDI Finds) recently, and I had to try them out of curiosity. 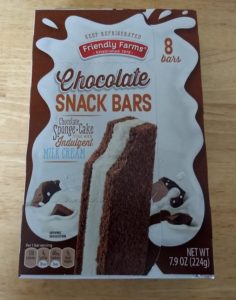 These Snack Bars were sold in the refrigerated area and came in two flavors: Chocolate or Hazelnut. I opted for Chocolate. The Chocolate Snack Bars consist of “chocolate sponge cake filled with indulgent milk cream.”

They consist of very thin layers of sponge cake with a thick layer of cream in the middle. The cream is firmer in consistency than traditional Cool Whip, so these treats are not like a Little Debbie snack cake. The sponge cake dissolves fairly quickly when I bite into it, leaving mostly the inner cream layer, which is about the firmness level of frozen Cool Whip, except that it’s not frozen. The snack bars taste good, but they also feel kind of odd to bite into. They don’t compare to any other snack food I’ve seen on the market. My kids gobbled them up, though.

Aldi’s Special Buy (ALDI Find) Friendly Farms Chocolate Snack Bars are unique. They look like ice cream sandwiches, but they’re refrigerated rather than frozen. They were interesting to try, but ultimately I probably prefer an ice cream sandwich or a Little Debbie snack cake instead.