Gardenline is one of the major Aldi brands associated with things outdoors. From garden tools to furniture, these Special Buys are most common in the spring months, although they occasionally make appearances in the fall.

We’ve previously reviewed the Gardenline Double Glider, which we found to be a nice addition to outdoor decor. Here we’ll take a look at its distant cousin, the Gardenline Two Person Swing. 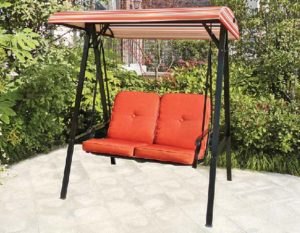 The Gardenline Two Person Swing is manufactured by FJK Home Products, a Midwest-based furniture company that makes furniture products for other companies and retailers. According to FJK’s site, they make a few other Aldi products, but it also seems that Aldi turns to other manufacturers for furniture and products in their Gardenline line.

The swing comes in a slim box. The box’s profile isn’t high, but it is long; an SUV or wagon with the back seats folded forward should do the trick to get your swing home from the store. The downside to such compact packaging, of course, is that it means more assembly when you take it out. The instructions aren’t hard to follow, but they do take time, and getting things to fit properly can, at certain points, be a hassle. The most aggravating part for me was putting the canopy together; it took some careful pushing (and eventually a second pair of hands) to get the thing set just right.

Once assembled, it’s not a bad piece of furniture, although it does have a few irritants. For example, putting on the canopy and taking it back off can be a bit of a chore — you have to line up the bolts through the holes just right — although having a second person to help you makes the job easier. Alternatively, you could leave the canopy on all the time, but if a storm with high winds is coming or you’re looking to store the swing for the winter, you might want to pull it off. Also, if the canopy is not adjusted at just the right angle, sometimes rain water will puddle on top.

A second irritant comes from four plastic base pieces, which affix under the four legs of the swing and help keep it flat on the ground. The pieces do the job, but they also slip off the legs pretty easily. If you decide to move the swing in for the winter, or to move it to another part of the patio or yard, be sure to keep an eye on the base pieces, as they can easily fall out or get misplaced.

Beyond those frustrations, though, this is a comfortable swing. The cushions are comfortable, the canopy does its job and can be adjusted a little, and two normal-sized adults — and maybe a small child on top of that — can fit without trouble. (Just be mindful of the 500 pound total weight limit.) It swings smoothly, and any squeaks can be easily fixed with a bit of WD-40. To top it all off, Aldi backs it with a two-year warranty.

UPDATE (March 2018): We originally purchased the swing in the fall of 2013. We store the swing in a shed during the winter months and still store the cushions indoors when not in use, and as of spring 2018 it continues to hold up well. There is some rust developing along parts of the swing, especially near the canopy. The canopy frame is beginning to come apart in places, and the canopy fabric is wearing thin and has a couple of inch-long tears, so we’re not sure how much longer the canopy will last, but the swing and the swing frame are both fine. The swing continues to function pretty much like it did when we first bought it.

It’s not the easiest to put together and it’s got a couple of small quirks, but it’s also a comfortable two-person swing that is ideal for those days when you want to sit outside. And because it’s Aldi, it’s cheap, too. Recommended.